Sports
A Look Inside: The Aberdeen Wings
The Wings organization created a culture within the community that celebrates hockey, and the new head coach plans to continue that legacy.
By Josie Clemens | November/December 2021 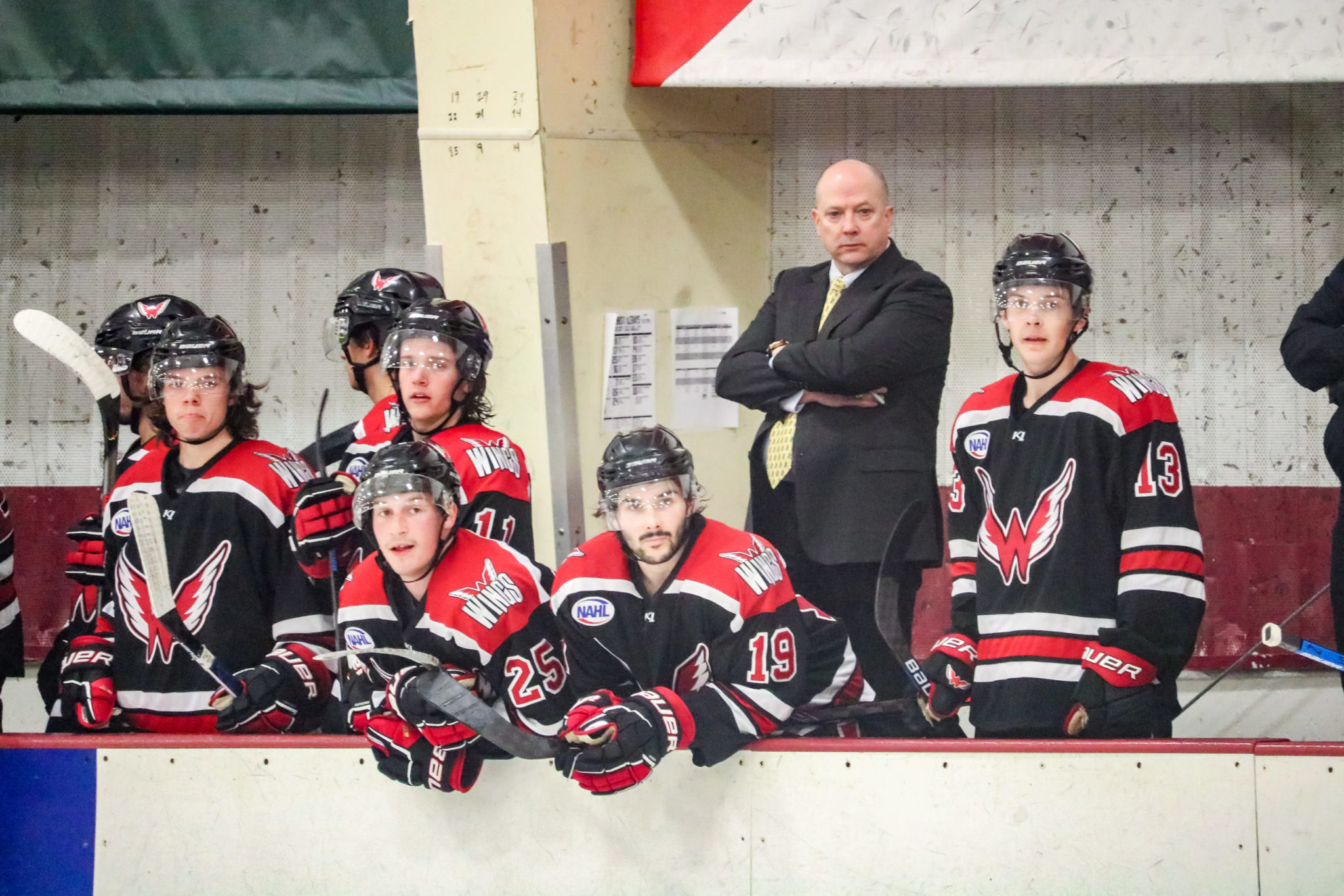 The Aberdeen Wings welcomed a new coaching staff for the 2021-22 season. Steve Jennings was named head coach and brought on Zach Stepan as the assistant coach. Photos courtesy of the Aberdeen Wings.

The Aberdeen Wings were named the 2020-21 Central Division Organization of the Year after achieving major organizational and junior hockey league milestones. Being the Robertson Cup runner-up and entering this fall under new leadership, the team looks to build off last season’s success and continue to develop a positive culture — both on and off the ice. 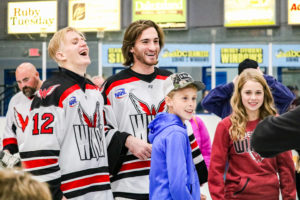 Hugo Gustafsson (12) and Kyle Kozma connect with some fans after one of their home games at Odde Ice Arena in October.

The 2021-22 season marks the 12th season for the Wings in NAHL. The era of junior hockey in Aberdeen all began in 2008 with an exhibition game.

“I got contacted by the owner of the Bismarck team in the North American Hockey League, Tom Brigl, in ‘08. He is just always looking for partners, different towns that could support a team in the type of league we are in. He thought Aberdeen looked really, really good,” Greg Odde, owner of the Aberdeen Wings, said.

The exhibition game was held at the Odde Ice Arena with another exhibition match-up in 2009. After the second exhibition game a year later, the prospect of starting a junior hockey team grew more serious for Greg and his family.

“We did some planning and ran some numbers and decided to take a chance on this, thinking that it’s got a real opportunity to succeed here. Not knowing at what level, but survive it basically,” Greg said.

Greg, with the help from his wife and children, started a new franchise instead of bringing in an existing team, and the 2010-11 season was the first year that the Wings competed in the Tier II league. The rest is history.

Being partners with the Aberdeen Hockey Association in the Odde Ice Arena, Greg invested in the expansion of the building to accommodate for the Wings and to give back to the community and youth association. This expansion of the south wall included state-of-the-art locker rooms, training facilities, offices, and upper-level luxury suites.

A Change in Leadership 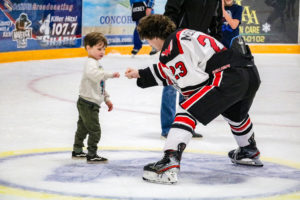 Greg credits the growth of the Wings program to the high support of the community and guidance by individuals like Pete Sauer, who was the Wings’ first coach and helped Greg with the original business model and development of the franchise in the league.

Since then, the Aberdeen Wings has been home to a handful of coaches and general managers who have all contributed to building the culture of the team, including Scott Langer, who led the Wings through many successes since his debut in 2016.

After Scott accepted the head coaching position with the Fargo Force in July, the Wings searched for someone to fill the seat and welcomed Steve Jennings to the head coach position.

In a press release from the Aberdeen Wings in July, Steve said, “I have huge shoes to fill behind the legacy Langer created, and I’ll try to continue that. The fan base and ownership have high expectations and know what Wings hockey is all about. I’m excited to be there to continue the journey.”

Steve began his coaching career in hockey after he graduated from Naval Academy. He coached the team at Navy for a season and a half before leaving for duty in the Fleet for several years. When he left active duty, he began coaching again with a club team in Pennsylvania.

When Steve moved to Texas and his son started to play hockey, that is when he met Scott. Steve has worked with him for almost 17 years since then—advancing in his experience as both a scout and a coach. When Scott was named head coach in 2016, Steve became the Wings’ Director of Player Personnel while also working as head coach for the Nashville Jr. Predators, an 18U AAA team.

“My job fundamentally was not to be here in Aberdeen watching the team. My job was primarily to be out recruiting, trying to build the team for next year,” Steve explained.

With his work behind the scenes as a scout and director of player personnel, Steve typically watched 500 games of hockey annually. And when he coached the 18U team, his primary purpose was to train the players to be able to compete at the junior hockey level.

“I really tried to morph my style there to be more similar to what the kids will face when they play junior hockey. So, instead of focusing primarily on winning games at any cost at the Midget level, we talked about player development, getting them ready to play the right way,” Steve said.

His experience in many areas of hockey from player to coach and scout to a fan in the crowd gives Steve a diverse knowledge of the game and an understanding in players’ roles, team chemistry, and the organization as a whole that he is excited to bring to the Wings as a head coach.

“I think we will be similar to what people are used to, as well, in terms of high-compete and a good balance of scoring and defensive power. I think it’s going to be a good year,” Steve said.

The second member of the coaching staff is the Wings’ assistant coach, Zach Stepan, who was the head coach for an NA3HL team for the last two years.

“When Steve called, that was a really exciting time for me because he has been around the block,” Zach said. “He knows his stuff. Every person who has ever played for him that I know has absolutely loved him and said that he’s one of the smartest people on the planet when it comes to hockey, so I am excited to learn from him in that aspect.”

More Than a Game 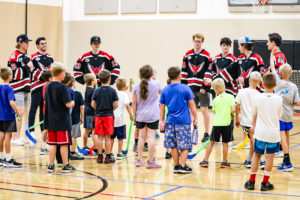 The Aberdeen Wings players give back to the community in many ways and are big role models for the youth in Aberdeen. One program that the players help run is the YMCA’s youth floor hockey.

The roster for the 2021-22 season consists of 24 players with nine returning from last season.

The Wings had an incredible year during the 2020-21 season, setting numerous records—including the NAHL records for most wins in a season (51) and most total points (103). Individually, members of the team earned high honors: Payton Matsui received the NAHL’s Forward of the Year honor and Jake Sibell was awarded the NAHL’s Most Valuable Player and Goaltender of the Year, as well as being named USA Hockey Goaltender of the Year.

Beyond the record-breaking year, the Odde Ice Arena paved the way for many successful players. As of Oct. 1, 2021, the Wings have committed 81 players to DI hockey teams and 28 to DIII teams. Since its first year as a franchise, the athletes who joined the Wings family entered a program that had a strong foundation within the organization and positive relationship with the community.

“Well we started the team, and right away we knew if you were going to get to the top, you had to have the right culture,” Greg said. “… We always wanted to do things the right way.”

The team looks to bring on athletes who are the best people, not just the best player. “Good people make good things happen, and we go for good people,” Greg explained. He also mentioned when you have an entire town full of people who look up to these players, they need to be model citizens.

“Culture makes you win on the ice, too. It just all works together,” Greg added. And it goes all the way from the owner to the coaches to the players to their billet families—where the kids live and stay during their time on the team.

“I hear more than anything, and it’s really gratifying to hear from the [former] player’s parents—even the players when they are here—that this is the best place their son has ever played,” Greg said. “We hear that all the time.” 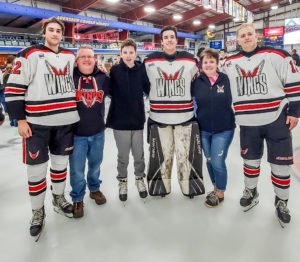 Wings players (in jerseys from left) Will Diamond, Dominik Wasik, and Hugo Gustafsson, stay with their billet family, Terry, Andrew, and Teresa Weber, during the 2021-22 season. Photo courtesy of Teresa Weber.

The relationship between the players and the Wings community is something really unique at the junior hockey level, and Aberdeen is one of the few locations that has achieved that connection.

“I love it,” Steve said. “It’s a good little town with quality people and people who care, which is the best thing. And you look at the ownership here and Greg and his family, and how much they care … that to me is a pure reflection of the town and the quality of the people.”

The Wings rely on the community, and to show their appreciation, the organization gives back to Aberdeen in as many ways as possible, especially to the youth.

“Players doing stuff in the community is huge,” Teresa Weber, a billet mom for Wings players, said. “I know kids look up to these players more than they realize. The players are like celebrities.”

One of the players from last season, Clayton Cosentino, received Central Division’s Community Service Award—an award that reflects the positive culture of the Wings as a whole.

The players make a variety of contributions to the community. The team assists with the Aberdeen YMCA’s floor hockey program, reads in elementary school classrooms, rings the bells for the Salvation Army, and participates in local events that make a difference in the community.

“Nico deVita and Dominik Wasik went to Andrew’s seventh-grade language arts class last year, and they all loved having the players there to read,” Teresa said. “I didn’t even have to ask. Nico and Dom volunteered and asked if they could. It was great.” 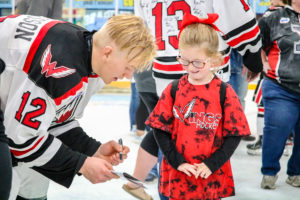 Hugo Gustafsson autographs a program for an excited hockey fan.

The Wings hosts several events at the Odde Ice Arena during games as fundraisers for local organizations. This includes the annual Teddy Bear Toss to benefit the Yelduz Shrine and jersey auctions with proceeds going to a specific non-profit or charity group. This season, the Wings planned two auctions—one for the DTOM 22/0 foundation and another for Sanford Children’s Miracle Network.

With fundraisers like the jersey auctions, where they earn $15,000-20,000 each event, the community becomes an integral part of the Wings’ philanthropic work. The character of the Aberdeen Wings is something that people have recognized since day one, and it’s a community effort to build the culture found within the franchise. And the support and attendance at games keeps growing.

“It surpassed my expectations in spades, and I don’t take credit for that either. It’s a phenomenon, really,” Greg said.

As the saying goes, it takes a village. “I would be remiss not to mention our business sponsors, too. I mean advertising, social media, commercials—we have tremendous support from the local businesses to help make this happen. It’s just unbelievable,” Greg said.

Everyone is excited to see what this new season brings for the Wings.

“It’s going to be really fun to be back in a community that loves their hockey,” Steve said. //

The Wings ended September with a 4-2 record and hosted the Odde Ice Arena’s season opener on Oct. 1. Wings fans can find updated stats and schedule online at www.aberdeenwings.com.