Percy won this trophy in the 1960 tournament at the Moccasin Creek golf course. He keeps it in plain view on top of a cabinet in his home. Photo courtesy of Brandon Heim .

When you look out at the beautiful green hills that is the Moccasin Creek Country Club golf course, could you believe that it grew from a small patch of grass? Could you believe the reason the beautiful Prairiewood lots and the golf course were made possible was by the commitment of one man and many kind residents and golfers? Everything you see today stands on the dedication of those people.

Percy Grote (96) is a builder of planes, fisherman, and most importantly, an avid golfer. His mind says he’s 18, but his body says he’s 118. That doesn’t stop him from playing a few holes with friends and taking challenging shots.

The Moccasin Creek Country Club golf course has its roots in the Aberdeen Country Club where the people were split between two parties—the ones who wanted the club to stay in Aberdeen and those who wanted to move. Percy came onto the scene just after the country club voted to make a new golf course, hired John and Bill Maddox to do the construction, and started talking about selling lots to fund the project.

Percy recalled being at a party that was thrown for John and Bill Maddox. “I got to talkin’ with him [John] and he said, ‘We gotta go out there tomorrow, out to this place and walk through it. We’d like you to come with us!’”

Percy obliged and didn’t really think too much of it until his friend Earl Haar informed him that he needed to buy a ticket as soon as possible. “You got to put in $1,000, and that gives you a number. That’s the number of a lot you’ll be able to pick. 88 was my number,” Percy said.

Many people wanted a lot alongside the golf course, Percy included. So, he decided to trade down for a lower number closer to the golf course. Dean Shortridge who had number 16 helped Percy trade down to the number one pick—for $200 of course.

After the golf course was finished around 1973, the National Association of Intercollegiate Athletics (NAIA) came out and inspected the course. They were incredibly impressed that the course was so nice that they could host tournaments there. They even asked Percy to be the honorary coach of Northern State University’s team.

“I got to mingle with all of these guys from all over … sit in their tables and … just go off and talk!” Percy said.

In 1976 the course ran into trouble when a severe drought came over Aberdeen. Grote recalled only getting seven inches of rain that entire year. The managers of the course were running out of money because people did not want to play on the course, which made it hard to pay the bills. And with the people who did play, all the golf carts driving over the course eventually burned the grass down to practically dirt. The course was in dire need of water. 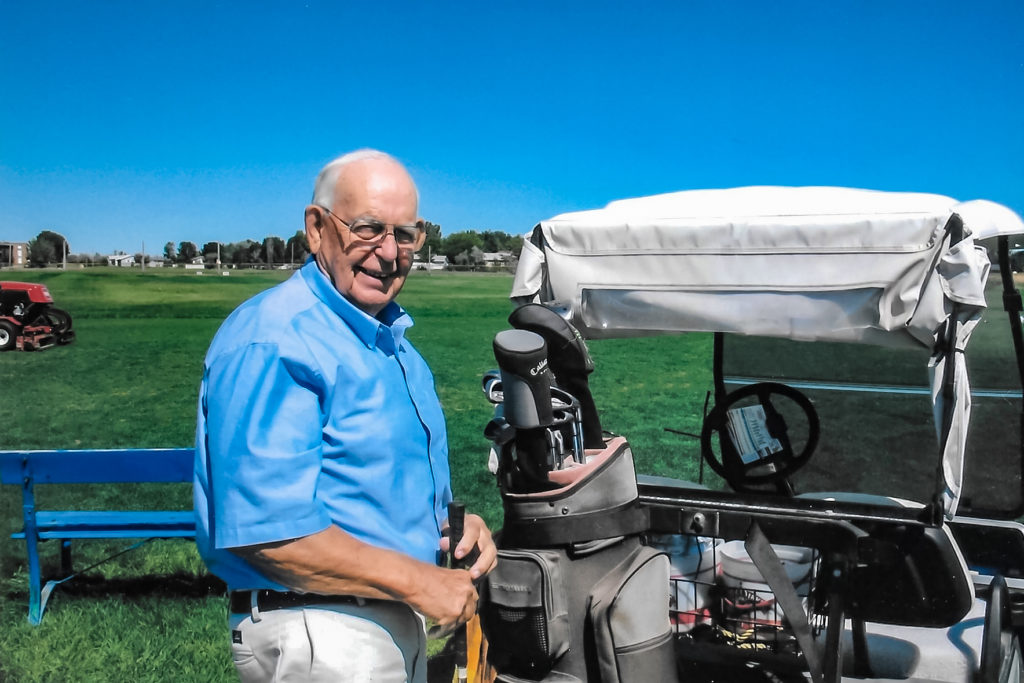 A candid moment of Percy getting ready to spend some time at the golf course.

Next spring, Percy’s good friend from his bank—First National Bank (now Wells Fargo)—asked him to attend a meeting with the association of the golf course and four bank presidents. The association of the Aberdeen Country Club went bankrupt and the bank had plans to build a subdivision for housing in the area. They asked Percy what he thought they should do about the course.

“Well, we’ve been waiting for years and years to have a really good golf course in Aberdeen. I would sure hate to see it not be a golf course,” Percy said in the meeting.

The bank then proposed giving Percy $30,000 to manage and build up the golf course for a year. “The budget for the golf course is normally about $85,000. I didn’t think there’s any way to do that because the golf course has no grass. And, they took a culture of the greens, and they said it won’t grow back!” Percy said.

Percy reluctantly went along with it. He contracted Conrad Bakken from Mitchell as a greenskeeper. The equipment was poor, and there was no money for upkeep, but Percy remained optimistic. “We’re gonna fertilize them [the greens], and we’re gonna water even though they look dead. Do that for about two or three weeks, and just by chance, maybe it’ll be worth the effort,” Percy said. After two weeks, to everyone’s surprise, green started to spring up.

Despite the victories, there was still lots of work to be done. Percy took spraying weeds into his own hands. Percy ended up quitting golf for a year so he could maintain the golf course. He’d go from 8:00 AM to 4:00 PM every day for work. Percy didn’t take any days off either, not even on holidays or weekends.

After that year, the golf course came back even better than before because Percy and his crew cleaned out all the shelterbelts, took out trees, and planted grass. Not to mention all the love, support, and help he had from the Prairiewood neighbors and other golfers. He called Conrad and asked him to put in all the pins and fill all the holes. Conrad was shocked and asked why.

“I’m gonna play. I’m gonna play it tomorrow morning,” Percy told Conrad. “I went out, hit a couple of practice balls … They weren’t good … but I went out anyway and started playing, and people would come out their backdoors and cheer.” It was just Percy playing that day, and the first time anyone had played it since he remodeled it.

Today, Percy doesn’t golf there anymore since he golfs with his friends at another location. He did all that work with no pay. Percy’s only motivation was his love and passion for golf. Once it was finished, he felt like his work was done.

“I always thought it’s the most beautiful golf course in South Dakota,” Percy said. “I still think that there are a heck of a nice bunch of people out there. They got beautiful yards that blend with the golf course, and that makes it a beautiful place.” //