Your City
“We Serve”
Aberdeen Lions Club reaches its 100th year of serving the Aberdeen community.
By Josie Clemens | November/December 2021 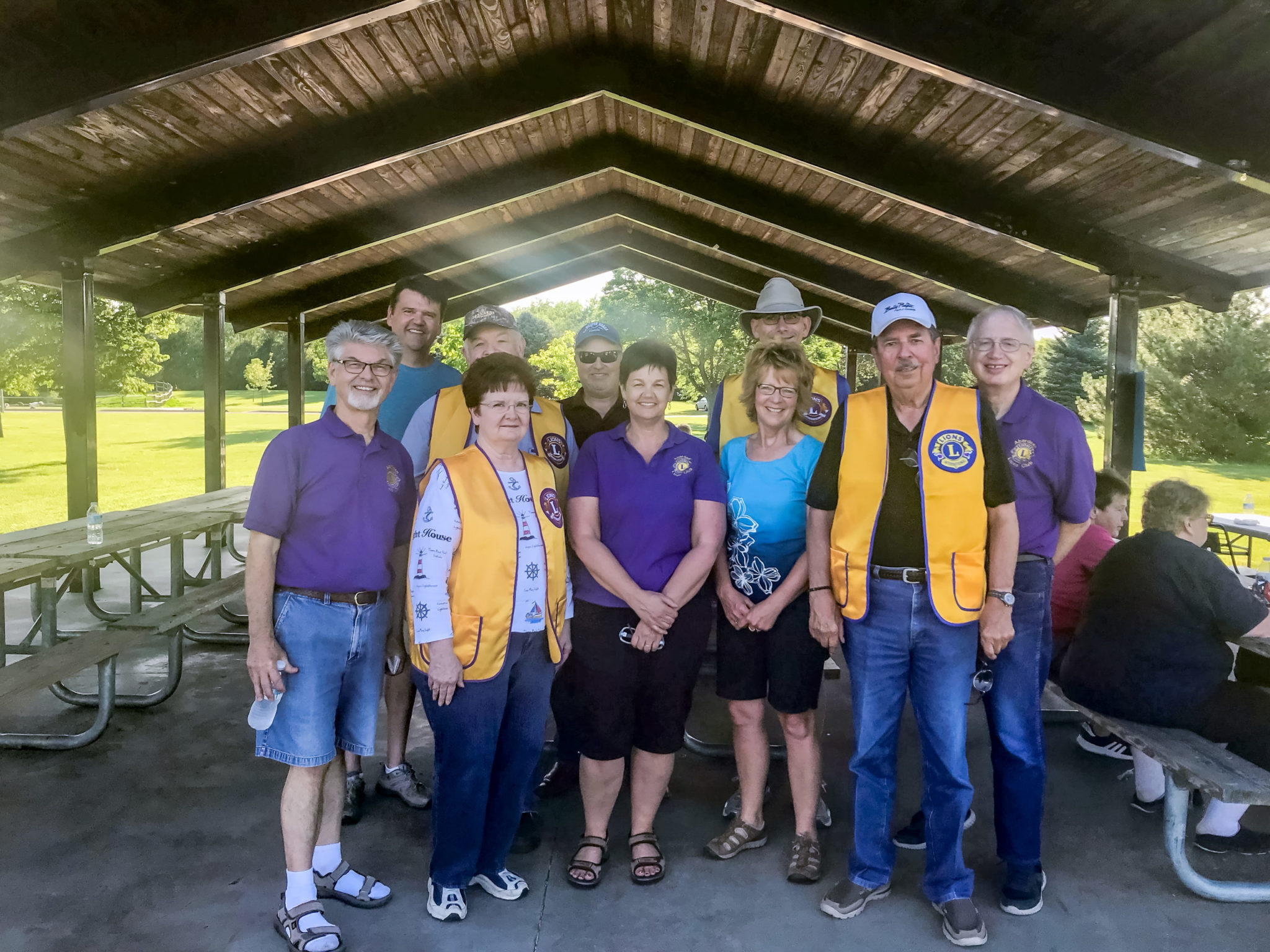 In 1921, the Aberdeen Lions Club was chartered by 42 men and became a member of the Lions Clubs International. On Oct. 8, the group celebrated its 100th year of service in Aberdeen.

“We are very proud of this milestone and the Lions before us that laid the foundation, as it takes a lot of individual dedication to keep something going for that long! I also think it speaks to the validity of the Lions Clubs’ mission and the importance of a local presence,” President of the Aberdeen Lions Club Jim Kuch said.

The international organization consists of 48,000 Lions Clubs worldwide, which is the largest service group in the world with 1.4 million members. 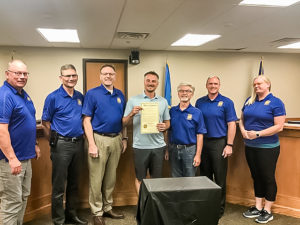 “The cool thing about Lions is it’s an international supported organization, but as an independent club, we are kind of free to run our club how we see fit,” Jim said. And besides paying their annual dues to the international organization, all the donations and fundraising proceeds stay local.

Jim has a passion for giving back to his community. Along with his responsibilities with the Lions, Jim is also involved in his church, co-chair for the United Way campaign, and is on the advisory board of the Salvation Army.

“I have always been a big believer in helping out, and I always encourage others to do it, too,” Jim said. He is not just another member of these various groups. Jim makes it a mission to be active and engaged in everything that he does, which brought him to his leadership role in the Aberdeen Lions Club.

Every two to three years, the Lions Club raises funds to do a large community service project that will benefit Aberdeen in some way. The project typically costs $3,000-5,000.

“A few years ago, we actually needed a new camera for the eye screenings, so we purchased a camera and printer and the equipment needed to support that,” Jim explained.

There are five global causes that are the focus for Lions Clubs International: vision, hunger, environment, diabetes, and childhood cancer. The Aberdeen Lions Club concentrates most of their efforts toward vision. 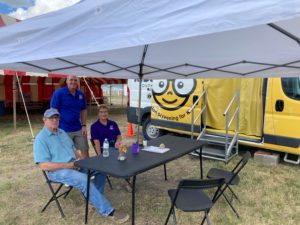 (From left) Lions Mike Denault, Aberdeen Lions Club President Jim Kuch, and Elaine Scherbenski attended the Sight Van at the Brown County Fair which screened over 250 children in 2021. The Lions screen over 3,000 children annually in the region.

Every year the club does 3,000 to 3,500 eye screening tests for elementary kids in Aberdeen and surrounding communities, directed by Lion John Emmet who conducts most of the screenings. They also provide eyeglass scholarships for people of any age who need financial assistance, giving up to $150 in support. The process is as simple as filling out an application on their website
www.aberdeenlionsclub.org.

Aberdeen Lions Club also partners with the South Dakota School for the Blind and Visually Impaired (SDSBVI) in several different ways such as sponsoring their back-to-school picnic and hosting a pumpkin carving party.

Another large fundraiser the club does each year in August is selling Monday Night Football books, which allow participants to win prize money. The proceeds from the sale of these books helps fund service projects throughout the community.

The Lions Club participates in various other sponsorships and events, depending on the needs of the community at that time.

The Season of Giving 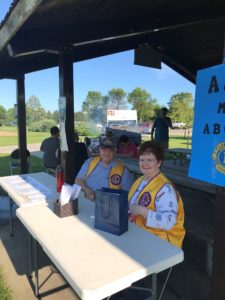 Lions Wayne (left) and Marlys Mardian helping at Burgers in the Park.

As the holidays approach, the season of giving commences. While volunteering in the community and donating to charities is a year-round activity, people tend to be more aware of lending a helping hand during the later months of the year.

“I just think you see the need more during the holidays just because everybody is focused on it. The holidays are a rough time for people, probably more than other times of the year,” Jim explained.

The Lions Club has a couple of events planned for the season. One of those includes a Christmas pizza party with the students and staff at SDSBVI.

“We have pizza, and we have a choir that comes in and sings Christmas carols. Santa shows up, and then we have gift bags that we hand out to the kids. That can be a variety of things—some gift cards for food and a little present,” Jim said.

An internal fundraiser for Safe Harbor is another service project that the Lions continue during the holidays. Members of the club make their own donations and also reach out to people in the community. With the money they raise, the members then shop for items like personal care products and toys for the children and deliver them to Safe Harbor. 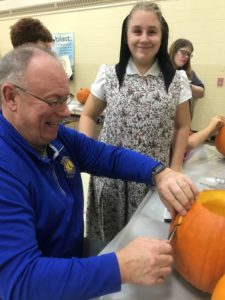 Lions John Emmet helping a student at the South Dakota School for the Blind and Visually Impaired pumpkin carving event.

“It’s exciting to see how willing people are to help out and to give,” Jim said. “You know, just that switch in mentality where most of the year you are trying to take care of your family or you’re just going through your day. … This time of year, it seems like everybody wants to help others. That’s probably the best part about it for me.”

The members of the Lions volunteer for a shift as bell ringers for the Salvation Army, too.

What started as a men’s social group grew into an international organization for both men and women of all ages.

The Aberdeen Lions Club provides behind-the-scenes support to many local groups and organizations around the community, filling a niche like offering vision-care resources and hosting events for the students at SDSBVI.

When asked to give advice for people looking to give back during the holidays, Jim responded, “Find a need and fill it. It doesn’t matter how much or how little, but any act of kindness is a good thing.” //