Your City
It’s Not Easy Being Green, But the Alternative Is Worse
People in the Aberdeen area are finding ways to add eco-friendly practices to help the community.
By Patrick Gallagher | March/April 2022 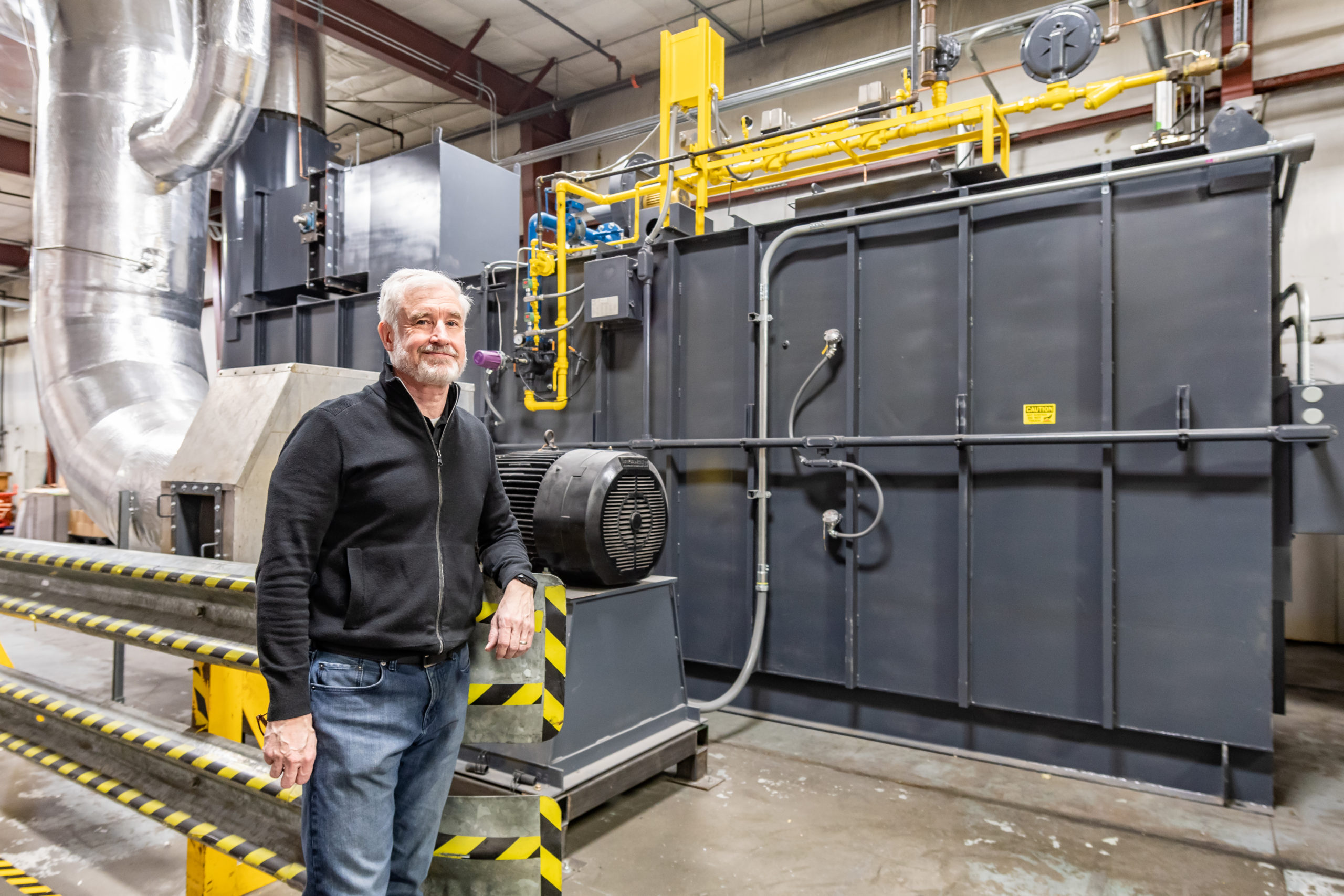 At the Midstates Printing plant, Paul Hopkins, vice president of Manufacturing, stands by the regenerative thermal oxidizer, which cleans the exhaust of ovens drying printing ink.

When the world observes the 52nd Earth Day on April 22, there are a lot of good things to think about, including things here in Aberdeen. Let’s take a partial look at ways the Hub City has worked to improve the environment.

Air pollution seemed out of control when Earth Day started, but U.S. air quality has improved thanks to cleaner emissions. Midstates Printing in Aberdeen recently installed a regenerative thermal oxidizer (RTO) to clean up what owner/CEO Matt Feickert called a “burning crayon” smell in the neighborhood created when the ovens that dry printed ink release solvents into their exhaust. While the plant was within emissions standards, the solvents had a low level of toxicity. Enter the $400,000 RTO in November 2021. The 50,000-pound machine subjects the ovens’ exhaust to 1,600-degree heat and breaks the compounds down to be emitted harmlessly—and odorlessly. Matt noted, “We did it to be a good neighbor as much as for environmental reasons.”

With a similar mindset, Aberdeen’s Presentation Sisters view environmental sustainability—caring for creation—an article of faith. To increase their use of renewable energy, in 2010, they installed a wind turbine and 125 solar panels on their convent grounds. Their artesian well also serves as a geothermal source to heat the garage near the turbine. Ahead of their time, when they asked the City for permission to install the turbine, there was no relevant ordinance, and the City Council had to create one. More than most, probably, the Sisters made the changes out of social justice concerns, primarily with the environment in mind rather than cost savings. Still, Sister Kathleen Bierne said they were told the turbine would pay off in twelve years, and “it’s been worth it.”

From a general perspective, most practices that result in energy cost savings also include more efficient, therefore less, energy use. Much efficiency comes when energy providers incentivize improvements. In describing Northern Electric Cooperative’s energy efficiency focus, Communications Director Ben Dunsmoor started with beneficial electrification, a concept that promotes using more electricity because electric generation is becoming increasingly cleaner. For Northern Electric, almost 85% of its electricity production was coal-based in 2000, compared to 41% coal and over 42% renewable sources in 2020. “So the more electric yard tools, appliances like water heaters and ranges, electric heating equipment, and electric vehicles (EV) people use,” Ben said, “the more it will benefit the environment.”

Northern Electric customer Dustin McNeil, a farmer near Stratford, recently bought a Tesla. “We planned to buy another SUV,” he said, “then we realized that if you don’t need the size of an SUV, you can look at something smaller.” He worked out the math and figured their EV will “save $1,400 a year on gas and on oil.” He also touted the efficiencies. “In an EV, 75-80% of the electricity is going to moving the car, compared to 35% of gas in an internal combustion engine.” He concluded pragmatically, “I’m not a tree-hugging hippie, but even if you don’t believe in climate change, you have to know oil is finite, and maybe we need to save it for more important needs.”

Key issues are where and when people will charge their EVs. Northern Electric CEO Char Hager said, “We know that the EV market is expected to grow. We are keeping our eye on public charging, at-home charging, and programs that would encourage EV owners to charge their vehicles during off-peak times of the day.”

On farms, load management runs equipment only when it’s needed. For example, Ben explained the system integrates with third party bin management technology “to ensure farmers are using electricity as efficiently as possible when they are drying and storing grain.” In homes, he added, “We also have 3,226 water heaters enrolled in our load management system out of a total of 4,727 members throughout Brown and Spink counties. So about 68% of our membership has electric water heaters under load management.”

Northern Electric also offers Renewable Energy Credits (RECs), which members can buy (at one REC per one megawatt hour) to support renewable energy. Businesses like RECs, Ben said. “If they participate in the REC program, they can promote their products as being made with ‘100% renewable energy.’”

Pipestone Management, a Minnesota company that operates farmer-owned Elm Valley Farms, a Groton area hog facility, utilizes RECs. Its president, Barry Kerkaert, said a Pipestone sustainability goal is to have 50% of its energy derive from renewable sources. “We have explored numerous options to reach this goal and feel that purchasing RECs is the most viable option for sow farms at this time,” he said. Consumers and retailers expect sustainable practices, he added, so Pipestone sets up its farms to compete and succeed long-term. Elm Valley is 100% renewable because Pipestone purchases RECs equivalent to its energy usage.

The big box stores also make sustainability a goal. Mariel Messier, Senior Manager of Walmart Global Responsibility Communications said the retail giant has zero emissions and 100% renewable energy goals, with hundreds of renewable energy projects around the world, including South Dakota. Sourcing from wind energy projects like the Crocker Wind Farm in Clark County and Triple H Project in Hyde County, she said, “brings us closer to our renewable goals while providing clean energy and economic benefits to the regions we do business with.” Mariel added, “Energy efficiency projects at our Aberdeen store help us reduce kWh usage.”

Schools are some of the bigger users of energy. Travis Sichmeller of Sichmeller Engineering has analyzed utility bills for many schools and found need for improvement, which offers a lesson in evaluating energy efficiency changes. “You need to know where you’re spending money, in particular knowing your unit cost from the utility and usage,” he noted. “Energy bills paint a picture of where you’re using energy, spending money, and where you should invest in capital improvements.” In one school utility bill, “we found that only 29% of the energy use was electric, but electricity accounted for 80% of the cost. Knowing this allows us to make good, informed decisions on how to become more efficient and identify the best return on capital investment.”

With about 4,400 students, 680 staff, and 800,000 square feet across 15 sites, Aberdeen Public Schools could have a huge carbon footprint, but it pays attention to its environmental impact. Director of Operations Ben Schnell has been with the schools almost his whole life, working 41 years since graduating from Central High School, and he’s seen how the system has committed to sustainability. When he was a student custodian, he climbed into boilers as big as a classroom. Today’s boilers are the size of his desk and significantly more efficient. That’s just one of many ways the system keeps improving, and he shared an impressive list:

“We always swap out appliances for a more efficient model” when they replace them, Ben said, like boilers, water heaters, and air handling units.

Energy management software controls each building’s heating, cooling, and lighting. Large equipment is brought online at staggered times to manage peak load charges. “Variable frequency drives can control how the machines run so they don’t use more energy than needed,” he noted. “For example, CHS air handlers are the size of a truck and take a lot of power. You don’t want them all to power on at once.”

The District is currently finishing a systemwide switch to LED lighting, which Ben estimated to include 13,000 fixtures. It’s the second complete changeout in 30 years. He noted, “Each change has brought dollar savings by reducing electrical consumption as well as improving the lighting quality.”

A more complete list would also include, among others, geothermal heating and cooling at Holgate and Simmons middle schools, electric hand dryers to reduce paper waste, recycling and use of recycled products, and planting 75-100 trees per year—pointing out diverse ways of being sustainable.

Travis Sichmeller has designed many geothermal projects in the state, and he likes a new technology, the hybrid heat pump, which combines conventional water-cooled air conditioning and hydronic space heating. The system efficiently heats and cools larger buildings, both by using energy only when it’s needed (the compressor only operates in the cooling mode) and through the capability of transferring energy from unit to unit and reducing boiler use.

Pioneering the hybrid system in South Dakota, Travis and his team used it to cut costs at Wolves Memorial Hall at Northern State University. “We learned from that job and have used the system more since then,” he said, “including four residential halls, the soccer/practice football facility, an assisted living facility, a Dacotah Bank renovation, and more.” He also imagines the technology in a potential greener future, musing, “If we could link multiple buildings needing heat with others needing to reject heat and transfer energy among them, that’s how we can be green!”

These are just a few of the reasons to celebrate on Earth Day in Aberdeen. Globally and nationally, we have a way to go. Summer forest fires a thousand miles away affecting Aberdeen’s air quality is only one symptom of a major problem. There’s still work to be done, but people are working. //