Your City
Leadership South Dakota
A Better, Well-Rounded Version of You.
By Patrick Gallagher | July/August 2022 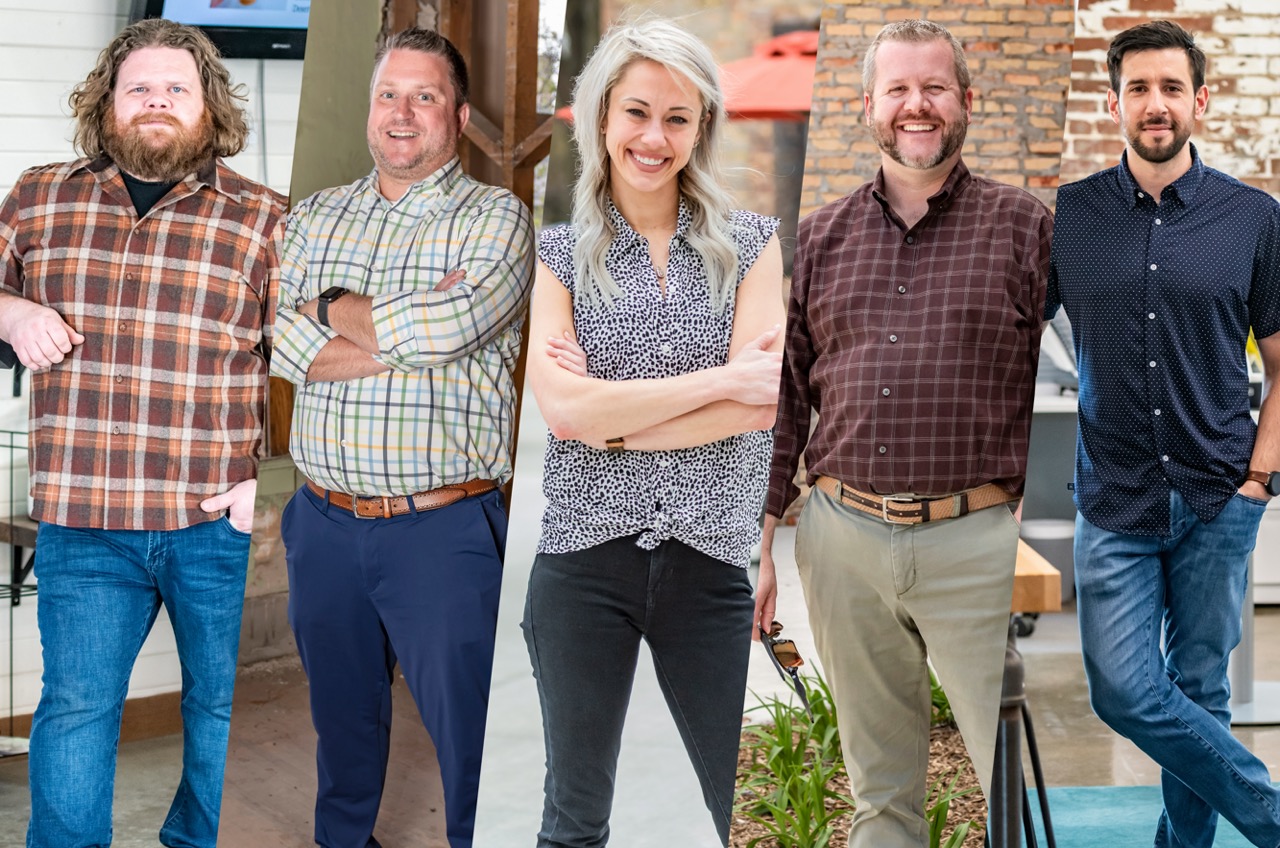 “Maybe it’s selfish, but the location that stood out to me the most was Aberdeen,” said Brodie Mueller, owner of Market on the Plaza and Engel’s Event Company. “There have only been a few of us from Aberdeen to go through the program, and it was a great opportunity to show people from Sioux Falls and Rapid all the great things we are doing up here.”

For Spencer Sommers, design architect for Co-Op Architecture, “Visiting different communities—looking at their struggles and their successes—and then comparing them with ours, left me feeling optimistic about the direction we as Aberdeen, and as an overall state, are heading.”

These and other area graduates of Leadership South Dakota not only learned about their state and themselves, but their hometown as well. They agree the program makes a difference.

Leadership South Dakota’s mission is to “connect leaders who will invest themselves, engage communities, and elevate South Dakota.” How did it come about? Rick Melmer, Leadership’s director and former South Dakota Secretary of Education, explains that on a visit to Wyoming, “a friend who had done Leadership Wyoming told us about it.” It struck a nerve, and on the drive home, he and his wife Val, the program’s hospitality coordinator, talked about it. They came to realize that “in a small rural state people are our greatest asset. We have wonderful people, with high integrity, character, and work ethic. We concluded that the best way to grow the state is through the people.” They started building the idea in 2013, and “we had our first class in 2014,” he said.

Every year, the program accepts 40 participants. About 20 come from corporate sponsors, whose sponsorships include the $3,000 tuition. Leadership receives 40-50 applications for the other 20 spaces, and a committee of corporate sponsors and alumni makes selections.

The program started with three primary goals. Melmer explained, “We wanted our participants to meet people from across South Dakota, see places most people don’t see, and learn about leadership along the way.” Later, they recognized networking with other leaders added significant value to the experience.

Networking also helped grow the program, as almost all the Aberdeen participants heard about it from colleagues. Tom Hurlbert, an Aberdeen native who is Principal Architect of Co-Op Architecture with offices in Aberdeen and Sioux Falls, said “I wasn’t too familiar with the program, since there had only been one group before me. But someone mentioned it to me, and I checked it out. It looked right up my alley, so I applied.” Then he encouraged his Co-Op co-worker Sommers and high school friend Heath Johnson, Principal of Dakota Plains Energy and Dakota Plains commercial real estate. The latter said, “It sounded like a great way to make statewide connections and open myself and my business up to new opportunities.” Employers also encouraged participants to apply.

Although they had similar goals in taking part, each Aberdeen area participant had a unique perspective on what they hoped to get out of Leadership South Dakota. Hurlburt’s goal was simple to begin with. “Networking statewide mostly. I didn’t really care about the other components initially.”

Katie Wagner Washnok, owner of Blackout Ind., said “I hoped to gain new experiences throughout the state I love. I wanted to meet new people who also share a passion for servant leadership, who are truly making a difference in our state.”

Tracy Olson, Avera Health Human Resources Officer, hoped to “learn more about our state and how we can help small towns like Frederick grow and thrive.”

Groups meet for two-day sessions in six different cities from September through April. Each gathering includes a mix of speakers, site visits to local businesses, educational institutions, and other unique places, and meetings on leadership topics based on a curriculum Melmer developed.

Each year, they’ve visited five “staple” communities: Pierre, Brookings, Rapid City, and Sioux Falls, plus a reservation town, either Kyle on the Pine Ridge Reservation or Mission on the Rosebud Reservation. The sixth city focuses on rural topics and has rotated among Aberdeen, Watertown, Huron, Mitchell, and Yankton. In two Aberdeen stops so far, they have visited Northern State University, Presentation College, and Molded Fiber Glass, heard from the mayor and other local leaders, and traveled to area Hutterite colonies.

The city visits make an impression. For Ashley Erickson, Sanford Aberdeen Executive Director, the most memorable stops were “our visit to Pierre visiting the capital and Brookings visiting Daktronics and the children’s museum.”

Mike Bockorny, Aberdeen Development Corporation CEO, said “The most impactful piece of Leadership for me was the visit to the Women’s Prison in Pierre.”

Several participants reflected on their visit to a reservation. “I think the trip to Pine Ridge was the most impactful for most everyone in our group. Many of our participants had never been to a reservation before,” Johnson said. “Just seeing the changes in attitudes about what life was like there brought on by our session was very impactful for me.” Olson added, “Mission and Rapid City opened my eyes to the cultural divide and why there is so much history and trauma to be healed with our Native American friends.”

In addition to learning about the state, most also learned about themselves and what they can bring to leadership. “I learned a lot about me, personally and professionally,” said Bockorny, who was impressed by “how much the program teaches you about yourself and how to be a better, well-rounded version of you.”

Washnok added, “Each month I came home with a renewed sense of purpose and an insane drive to do more. The program truly helped me to home in on my ‘why.’ Leadership set me striving for a life of significance and a way to add value to all I do.”

Somewhat ironically for the youngest participant, Sommers noted, “One of the biggest lessons I’ve learned is to not go into experiences with preconceived notions. Talking to people and seeing things first-hand can really change your opinion on what you thought you already knew.”

Mueller said, “I felt like I was in a very different place in my career—just starting—than many others in the group, but I learned a lot.” He added, “In a weird way, it also taught me to embrace the off-the-wall, loud, and daring person I am. It was kind of fun to be the messy scrappy young entrepreneur in a group of bankers and lawyers.”

Melmer hopes Leadership South Dakota graduates will be engaged at the local and/or state level and that they will serve in some way. This doesn’t have to be governmental, he insists, but there are legislators and local and county officeholders among alumni. Melmer sees more connections among alumni as they think more strategically, including East River and West River people working together, certainly a mark of success in South Dakota!

In that light, participants shared what the program inspired them to do. Bockorny said, “I have become more active in public policy advocacy at the local and state levels. The contacts I made have paid dividends countless times related to our work at the ADC in two ways. First, having knowledge about the entire state of South Dakota—why things are the way they are, where things are located, etc. Second, contacts I made across the state have been invaluable in helping, recruiting, and sustaining businesses in Aberdeen.”

“I left Leadership with the goal of going ‘narrower and deeper’ in my focused impact on my community,” Washnok said. “Since then, I have had several opportunities to use the mantra and really dig in: The EDGE Taskforce, launching the Aberdeen Area Chamber’s brand new 4 Under 40 honors, strategic highlights at the Hub City Cup Show.” She added, “I strive to be a connector, Leadership SD helped me find and hone that strength.”

Johnson tries “to incorporate as many of the lessons learned that I can into my job, personal life and even my volunteer board participation.”

As Melmer recognized, networking is one of Leadership South Dakota’s greatest benefits. Washnok agrees, “That is one of the coolest aspects of Leadership SD, after you complete your year, you transition into this fantastic group of alumni. Whereas you always have a special bond with your class, you now have an entire network of all those who have completed the program.” Sommers added, “A group of us just got together in Sioux Falls for the weekend a few weeks back for a social gathering, but it’s not unusual for us to brainstorm ideas back and forth on other projects.” Olson’s group is “connected on email, LinkedIn, and the Slack app. We are supporting each other with celebration of achievements, new businesses, and loss.”

“We’re conveners,” Melmer concludes. “We bring people together from all over South Dakota and hope something develops during that time. Then we want them to take the initiative.” He added, with no little satisfaction, “We tend to attract what I’ll call ‘activists,’ and we throw gas on their energy.”

So, is Leadership South Dakota for you? Hurlburt offers typically dry advice: “If you don’t need more business, if you don’t enjoy learning about South Dakota, and if you don’t want to improve personally, then skip it. You don’t need it.” Johnson counters, “It was a great experience and well worth the investment of time and money. I believe that I have become a better business owner, local board member and member of my community. I would highly recommend the program to anyone who has an interest in bettering themselves.” Washnok cuts to the chase, “Stop overthinking it and just apply! You will never regret this program.” //