The Nelsons have both raced at the Brown County Speedway. Photos by John Davis.

The Nelson name has been synonymous with auto racing success for nearly three decades.

Gregg and his son Trevor raced in different eras at Brown County Speedway, but have gotten a chance to compete in the same race a time or two the past few years.

That happened on opening night when the duo lined up side-by-side in the front row of a Super Stock heat race for the first time at the local track.

“I’ve never been in that position before,” Gregg said. “First time in my life. It’s overwhelming to a point.”

Getting a chance to compete against somebody who taught him invaluable lessons about racing is something special for Trevor. 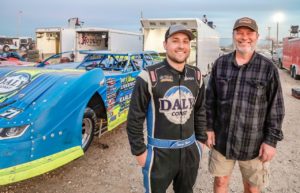 Trevor and Gregg Nelson have been able to compete in the same races after Gregg returned to the sport.

“It’s kind of a dream come true getting to race against your own dad,” he said.

The father and son have had incredibly similar racing careers. Both have won numerous track championships, and both have finished as high as third place in national points.

Needless to say, Trevor got into the sport by following his father’s footsteps, but the competitive desire was there long before he got into organized racing.

“My whole life I’ve kind of been a motorhead,” Trevor said, noting that he raced snowmobiles, four-wheelers, whatever was available on the family farm. “I’ve always kind of liked the speed and danger of it, I guess. I wasn’t really scared of anything.”

Interestingly, Gregg got out of and back into racing because of his family.

The elder Nelson walked away from racing in 2003 to spend more time with his family and because of the cost of competing.

Nelson remained out of the sport until his son became a fixture at the local track. Soon, he found himself helping Trevor with his car and eventually made it back behind the wheel, although on a somewhat limited basis.

Gregg has been working on his own car, but his priorities have changed since his competitive days.

Still, with the right person behind the wheel, a car can come to life pretty quickly.

“That car is kind of our trial-and-error car. We kind of throw some wicked stuff at it just to see what he thinks,” Trevor said. “He’s just out there for fun anyways, but it really didn’t take him long to knock off the rust.”

Gregg understands completely that this is not a family rivalry. He has yet to beat Trevor in his return to the track and doubts that it will ever happen.

“I’d have to race three nights a week to get back in shape to beat him, I think,” Gregg said. “He’s running pretty good. My goal would be maybe just to keep up with him for a few laps. He’s on top of his game right now.”

So much so that the younger Nelson only lost two features the entire season at Brown County Speedway last summer. The fact that the teacher can no longer beat the pupil is just fine with Gregg.

Trevor will be the first to tell you that his success on the oval can be traced right back to his father.

“I don’t think I could ask for a better mentor,” Trevor said.

In addition to helping to set up his vehicle, Trevor said that his dad has taught him a variety of things, like “patience, being straight and smooth, and just all that little stuff.”

Gregg is wondering if any of that information has sunk in with Trevor. He is still waiting to see if his advice about being patient will be put into practice.

“I told him for years on the starts when the green flag drops the first time, just hold back a lap or two and let the cars get spread out. When you go hard on that first lap, it bites you in the butt lots of times,” Gregg said. “He always tells me, ‘OK, OK, I’ll stay back, I’ll stay back’ and every time the green flag drops, he’s in there three-wide. He’s never held back on a first lap yet, I don’t think.”

While that may be, there is no denying that Gregg’s talent and racing skills have been transferred to the next generation.

Last season Trevor broke Gregg’s track record at Brown County Speedway for all-time victories in the Super Stock Division and he is showing no signs of slowing down any time soon.

Not only has Trevor duplicated his father’s success inside a race car, he also has his dad’s former number ‘71’ on the outside of it.

“I was happy he took it. I wanted him to take it,” Gregg said. “When he first took the number, I didn’t think I’d ever be racing again, anyway.”

Gregg is content to compete with the number ‘71SR’ with the SR standing for what else — senior.

Looking back on it, Gregg wishes he would have competed for a while longer than he did during his prime.

“I wish I would have stayed in it longer back when I quit or actually started sooner,” he said. “I was almost 40 years old when I jumped into a Super Stock.”

While those days may be in the past, Gregg is still finding ways to remain connected to the sport. Now if he could just find a way to be able to compete with his son.

“I’m very proud of him,” Gregg said of Trevor. “I figured he was going to be all right if he kept to it and kept working hard, but he came on pretty quick.”

Trevor knows that if his dad starts getting serious about his return, his strongest competition could very well come from somebody who has helped to pave the way for his auto racing success.

“His time is coming,” Trevor said of his dad. “If he keeps racing consistently, he’ll be right up front with us.” //