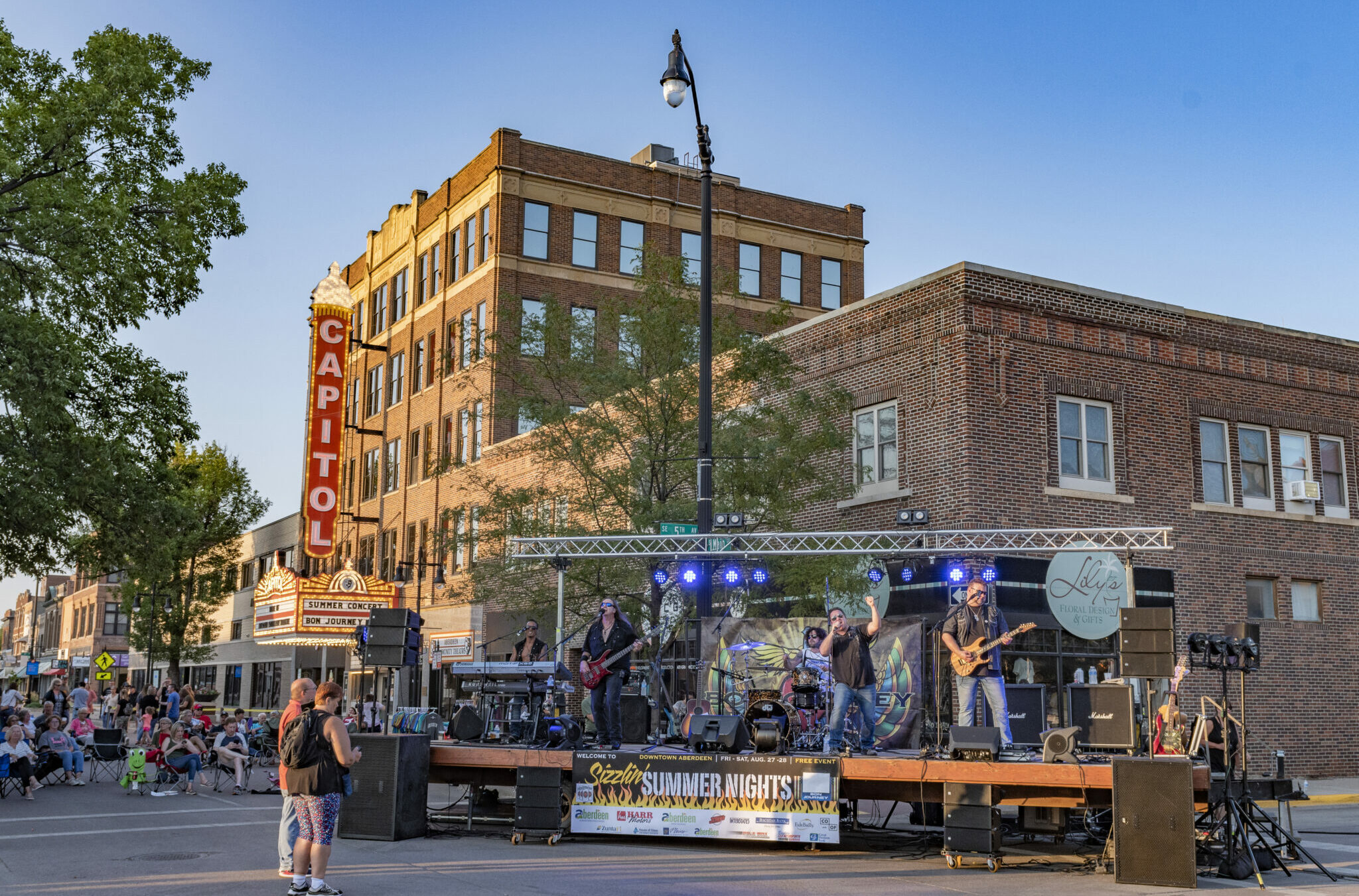 Walking into the newly relocated Haggerty’s Music store on its opening weekend, a quote from Dave Clark came to mind: “Music is the soundtrack of your life.” For starters, the store is gorgeous, tasteful, and a tribute to the thriving community that keeps the music scene alive in the Aberdeen area. Rows of guitars stacked invitingly on an interior exposed brick wall inspired me to ponder how significant a local music scene is for a community. Behind each one of those instruments beautifully displayed in the cavernous new space might be a musician making lifetime memories for someone in this town.

Wandering through the store, it also occurred to me that if the owner was willing to make the investment to relocate to a retail space three times the size of the previous location, there must be a story here about the local music scene. I set out to find it.

Aberdeen has always had a vibrant, local music scene. According to several people I spoke to, there is a good reason for that. Aberdeen is unique – not only among cities in South Dakota – but unique among the continental United States in one way: it’s isolated and self-contained.

Mike Levsen, who served as Aberdeen’s mayor for 15 years, explains it this way: “We are 200 miles from Sioux Falls, almost the same distance from Bismarck or Fargo. If we go west, there’s nothing. If we go east, past Watertown, which is smaller than us, the next biggest city is Minneapolis. So if you look at the map of the country, there is no other city between 20,000 and 40,000 people that is as isolated from a bigger city than we are.”

Paris Briscoe, local business owner and record collector, recalls Levsen making this observation one evening speaking at the historic Capitol Theatre. “Because of that [isolation] we have to make our own form of entertainment here. I think that inspires a lot of musicians to hone their craft here in Aberdeen,” he said.

In the 60s, 70s, and 80s, Aberdeen brought big-name acts to town. The Aberdeen Civic Arena and the Brown County Fair hosted dozens of shows including Eric Burdon and The Animals, The Doobie Brothers, Three Dog Night, Neil Diamond, The Carpenters, The Grass Roots, The Monkees, John Denver, and Willie Nelson. In fact, according to Dave Swain, after Willie Nelson’s 1968 performance, he went down to the local Club 23 on Main Street and sat in the audience where Bob Styles’ country band was playing. Willie asked him that night to join his band. Styles, a cattle farmer, politely declined, but continues to play today. You can catch him at the Aberdeen Elks Club once a month. 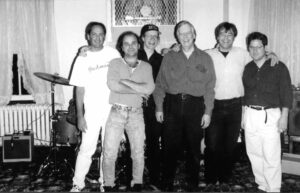 Swain, now bartending at Minervas, was the manager and all-around talent scout for the Brass Rail bar at the Ward Hotel for most of the 90s. Over the course of that time, he brought dozens of acts to town, in addition to hosting local talent. Swain is credited with recruiting Dave “Snaker” Ray, a blues guitarist out of Minneapolis, to play in Aberdeen. Swain says he was riding his bike near the Northern State campus and heard Ray playing. NSU used to host outdoor music in the summertime with a program called “The Green Scene.” After Ray was done, Swain asked if he’d be interested in playing the Ward Hotel. “I had no idea who he was,” says Swain.

But Ray had been friends with Bob Dylan and went to New York with him in the 60s. He produced Bonnie Raitt’s first album. Swain recalls, “I told him I ran the Brass Rail bar at the Ward and I said ‘would you want to come play?,’ and it was like $150 and room and board which was a pretty good deal. So he came back two or three times and brought a fellow musician with him. Might have been Spider Koerner. Then, they both would join the Pops Blue Rhythm Band and play with them. Ray was Pete Burckhard’s idol when he was growing up. It was kind of the first white blues band, Snaker Ray was.” 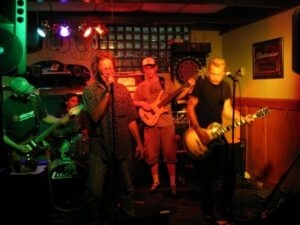 Burckhard’s Pops Blue Rhythm Band has been an Aberdeen favorite for decades. The Burckhard family has made its mark on the Aberdeen music scene for three generations. Brothers Joel and Justin Burckhard used to play with Dad (Pete) in Pops Blue Rhythm. They both went on to play in several bands. Joel’s latest is a country band, The Barstool Prophets. The band is enormously popular locally and has a strong following. The band recently released their new album, Songs for Leaving. It’s available on all popular streaming platforms. Joel’s daughter, Alexis, is well-known as a local musician too.

Jeremy, the youngest of the Burckhard boys, told me his mother used to sneak him into the back door at Robbie’s (a popular, downtown local bar and grill, now closed) when he was 6 years old so he could hear his Dad play the blues on a Saturday night.

“Growing up around music, watching my brothers play and seeing them… I think I was seven or eight years old when I went into my first punk show at the Knights of Columbus. I was like, ‘Oh, this is what I want to be doing.’ It wasn’t just people in the bar sitting around drinking and trying to talk over the music, it was people really engaged in the music in a very primal, natural way that was really cool.” 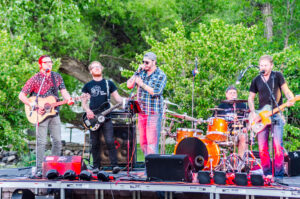 Jeremy is currently in a band, House of Tomorrow, with his best friend, Trevor LeBeau. They’ve been together as bandmates since 2001. Jeremy had the best take on what makes the Aberdeen music scene unique. It jibed with what Levsen told me: “I think the one thing that ties all Aberdeen music together is, well, there’s no competition. Like, one band trying to get a leg up over the other one because, I mean, you step on the toes of the dude in this band, everyone’s just gonna know about it. And you’re gonna be the jerk. Also…to survive a South Dakota winter, we all need to be really nice to each other. Even if we don’t like each other. We have to work together, or we’re all dying. So it’s kind of survival. Yeah. And not survival of the fittest but survival of the community.”

When Slacker’s bar shut down this past spring, it was a blow to the local music scene. Slackers on Main Street was one of the few venues where local musicians could play to a regular, loyal crowd. Other organizers and venues in town include the Red Rooster Coffee House, the Hub City Station Event Center, the City Lights Bar & Event Center, Malchow Plaza, Schwan’s Recreation Bar & Grill, Aberdeen Community Concerts Association, Aberdeen University/Civic Symphony, and the 420 Lounge. There is talk of a new venue opening up to replace Slacker’s, but that’s still in the rumored stage as of this writing.

I had to ask Marcus LaVake who owns Haggerty’s Music if my hunch was right about his expansion. He confided to me, “The inventory that you see, what I have there, the town probably doesn’t justify in terms of overall sales. I’m from Redfield, but basically I was in Aberdeen about four times a week. And as a musician growing up in Aberdeen, you’d always have to travel to places like Fargo to Marguerite’s Music (now closed) or to Sioux Falls to see a really large selection of guitars that maybe you’ve only read about in magazines. That’s why it looks how it looks and that’s why we expanded how we did. I just thought somebody needs to support local music and bring something that’s really special to Aberdeen.”

If music is the heartbeat of a city, Aberdeen’s supportive creative community is its lifesblood. Levsen, again, says this is out of necessity and culture. “They [musicians] have to be self-sufficient to some degree, but also to another degree, they have to be cooperative and collaborative with people who are right here. Because a good guitar player living in Brookings can drive down to Sioux Falls every Saturday night and find somebody to jam with. Not here. You’ve got to do it here.”

Here is very good, indeed, for the 28K or so Aberdonians who make their lifetime memories within the 16.5 square miles called home. //

If YOU love rock and roll, this heartwarming story may make you love Joan Jett too. The iconic 80s rocker with the badass image, turns out to be a down-to-earth, generous person. I was telling my chiropractor, Dr. Randy Mages, about the local music story I was writing for the magazine. He said, “I have a story for you.”

Mages told me he and a friend had tickets to the 2004 Joan Jett and the Blackhearts show at the Brown County Fair. His friend, Bob Cihak, an ear, nose and throat doctor in town asked him if he could bring his friend, Jeff Hartman. He told Mages that Hartman knew Jett because when he was stationed in Bosnia, he knew she was performing in a USO tour for the American troops that week. Hartman, an Army ER trauma doc, wrote to her and asked if she would be his date to an awards ceremony where he was going to be pinned with an advancement medal from lieutenant to major.

Jett said yes. She accompanied Jeff to the ceremony as his date.

So in 2004, the three of them headed to the fair hoping to see her in person before the show. They were met at the gate by Jett’s manager, Kenny Laguna, and escorted them to her private quarters– a trailer at the back of the stage. Jett was gracious and welcomed them as friends. They spent about 45 minutes with her and her entourage. Then, Jett gave them backstage passes.

Mages’ big regret of his rock ‘n’ roll life was that Jett at one point in the evening offered to make him a PBJ. He declined, but always wanted to tell the story about how Joan Jett made him a PBJ! //