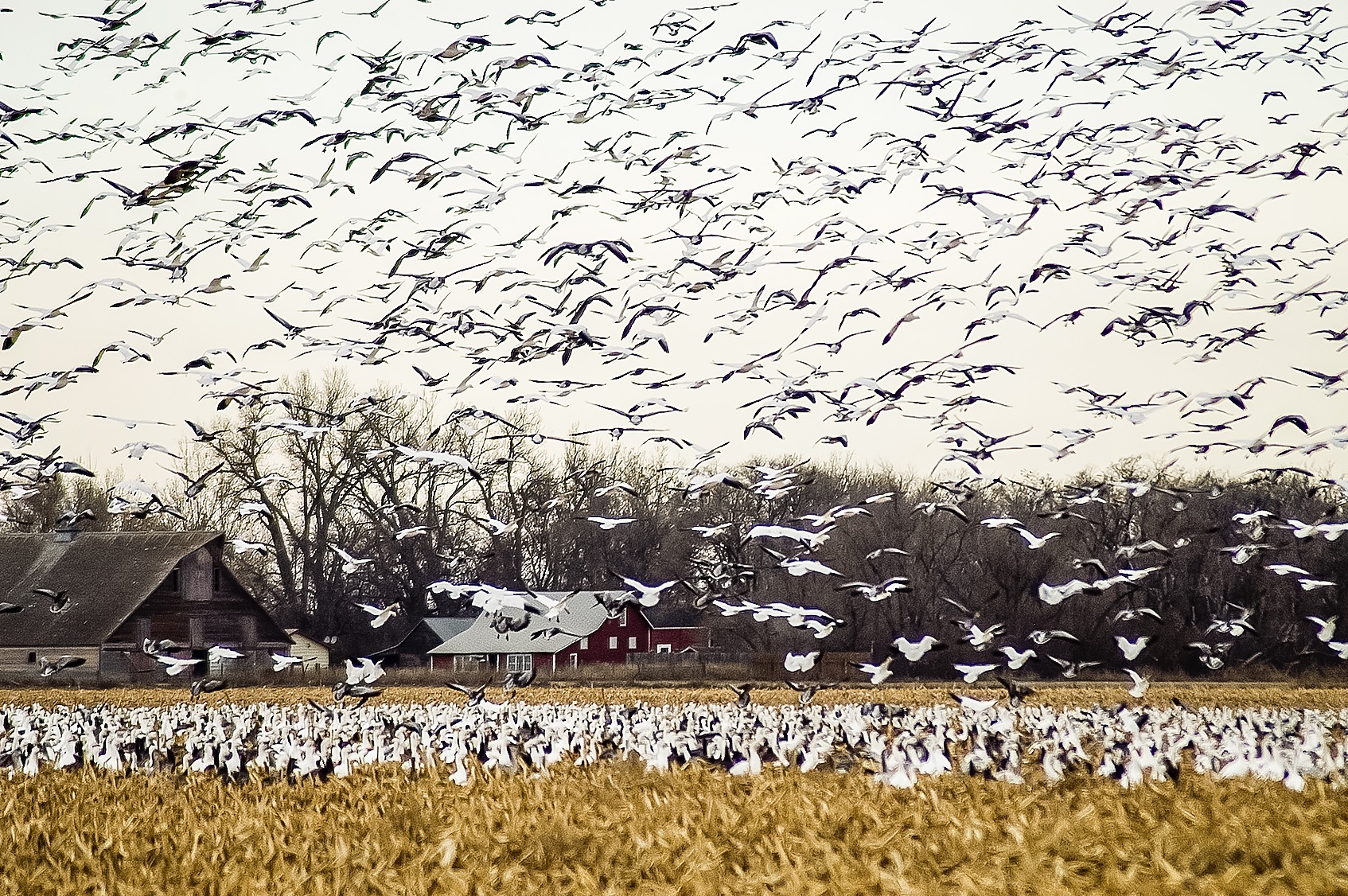 As a young boy I followed my father in pre-dawn darkness across a quarter mile of fall-tilled cropland to a goose-hunting pit just outside the western boundary of Sand Lake National Wildlife Refuge. I remember watching his steady stride, as I stumbled over dirt clods, and noticed he carried far more gear than me. The sound of our boots crunching frosty soil was amplified on still, chilly mornings. Some days we arrived later than he liked, with the sky already colored by smudges and streaks of purple and pink. Hurry, urged my dad. He knew that when the sun rose the geese would stir, take flight inside their sanctuary and possibly fly our way. We needed to be out of sight. The hiding place we occupied was a thin, rectangular excavation, a hole cut neat and deep by a backhoe.

I was his retriever, scampering to grab a downed goose shot dead, and sometimes chasing a wounded bird that seemed as big as me. I nervously learned to wring a neck and end a life. My dad would whistle his approval when I dragged a bird back to the pit. They were beautiful creatures, those blues, snows, and Canadians. I remember asking where they had come from, and how they’d arrived at Sand Lake. They fly from Canada, he said, and this is just part-way during a lengthy flight to warmer places in Arkansas, Texas, or Mexico to spend the winter. My dad described that trek as a “migration”, which was an odd-sounding word to a seven year old. At Sand Lake, he said, the big birds rest for a week or so on sloughs and lakes, and each morning during their stay they leave the refuge to search for feeding opportunities on croplands scattered across the James River valley.

Like the geese, we dined. Dad would pour me a cup of hot chocolate from a red plaid thermos and hand me an apple and a ham and cheese sandwich. That simple event became an anticipated ritual of each outing. I grew up shooting waterfowl and pheasants with my own shotgun, but my experiences at Sand Lake without a gun and with my dad are my fondest hunting memories by far.

I didn’t realize it then, but I do now. Those hunting trips offered me rare opportunities to watch, listen and talk to my dad with no one else present. My siblings at the time, both younger, had been left at home in Aberdeen with mom.

On nippy mornings we exhaled steam as we spoke, and my dad’s words seemed clearer, easier to understand than when we were away from the hunting pit. 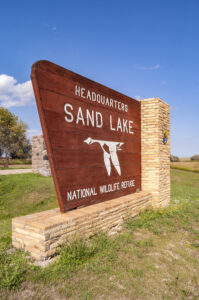 Not long after we started our Sand Lake expeditions he told me about his father, my namesake. My grandfather had been accidentally and instantly killed in a shooting accident while hunting waterfowl with his friend and his friend’s sixteen-year-old son. My dad was eleven when he lost his dad.

I learned that my grandfather had been a hunting enthusiast, spending weekends camping and waiting for ducks to pass by camouflaged blinds he and his buddies fashioned beside backwater sloughs dotting the forested Mississippi River floodplain near where they lived in Wabasha, Minnesota.

That my father enjoyed hunting after what happened to his own father was curious. No doubt the searing pain of losing his father had eased with the passage of time. My dad was a disciplined, deliberate man. He’d probably studied his options. I suspect that he mindfully and purposely decided to embrace rather than avoid waterfowl hunting.

I want to believe that while my dad stood beside me and searched the sky for birds, he felt a comforting connectedness to his father. That beneficial circumstance extended to me, as my dad was able to introduce his son to the out-of-doors just as his father had introduced him. Today, six decades after sprinting across a vast, open field toward a fallen goose, and forty years after I stopped hunting with a shotgun, it is almost impossible for me to not think about my dad and Sand Lake whenever I witness living geese flying across the heavens.

During foggy mornings at Sand Lake, daylight illuminated air and land like a hazy black and white photograph, and we could mostly only hear flying geese. A flock traveling especially low might suddenly break free of the mist and pass closely overhead, visible for only a moment, faint ghosts quickly appearing and disappearing. Countless waves of obscured geese streamed out of the refuge, their crisp, distinct voices deafening. I peered into eddying clouds, hoping for a glimpse. My dad never complained when he had not managed a single shot.

On clear mornings we could see inside the refuge, and we waited for that rousing instant when a massive resting flock would burst into flight, preparing to set off for nearby grain fields. Would they pass our way? “A cloudless sky and geese fly high,” my dad would say. Sometimes luck was with us, and a steady throng of vee-shaped groups flew directly above. We were unconcerned if they were out of shooting range. One troop after another sailed by in a long, orderly procession. I would stand straight up in the hunting pit, my eyes barely raised above the soil line, and stare at the wild spectacle. My father could not have instructed me more effectively and commendably about the grandeur of nature and the elegant equilibrium of the natural world than when he brought me to Sand Lake, and together we witnessed skein after skein of chanting, chattering geese and the whispering din of ten thousand wings. //

Bird migration happens twice each year, in spring and fall. Some people may not know that most migrating songbirds prefer to navigate the perils of long-distance travel at night. But even those Aberdonians who pay little attention to birds know about migration because during these two seasons the daytime sky over Aberdeen carries great flocks of geese traveling north or south on the heavily used Central Flyway, one of our continent’s four principle migratory corridors.

During spring, in the 1960s and 1970s, Sand Lake National Wildlife Refuge hosted up to a million geese migrating from winter destinations more than one thousand miles away. Refuge officials claim the highest daily estimate of geese on the refuge occurred on a spring day in the early 1990s, when over two million birds were counted. The northerly migration delivers larger daily numbers to Sand Lake than during autumn because migratory bird flocks are typically stacked up in Kansas or Nebraska while waiting for snow and ice to thaw in Sand Lake’s section of the flyway. When favorable weather finally permits spring’s migration to resume, a great concentration of geese progress northward together.

Goose numbers at Sand Lake aren’t so large in fall because their departure from summertime nesting and brood-rearing areas, many hundreds of miles north of the refuge, is less constricted by weather conditions, and southward migration is spread out over more time than in spring. Still, there might be a quarter million geese using Sand Lake’s habitats on any given day during the height of autumn’s passage.

Goose hunting at Sand Lake was allowed only during a single span of time in fall until 1999, when a rising goose population across the hemisphere prompted wildlife managers to add a spring hunt. Goose numbers increased for several reasons, including expanded grain production in Canada, and global changes in climate that affect habitat and range.

Sand Lake National Wildlife Refuge – established in 1935 – has been designated as a wetland of international significance. Only thirty-five places in the United States are included on that select list of global treasures. WildBird Magazine identified Sand Lake as one of North America’s top fifteen sites for bird watching.