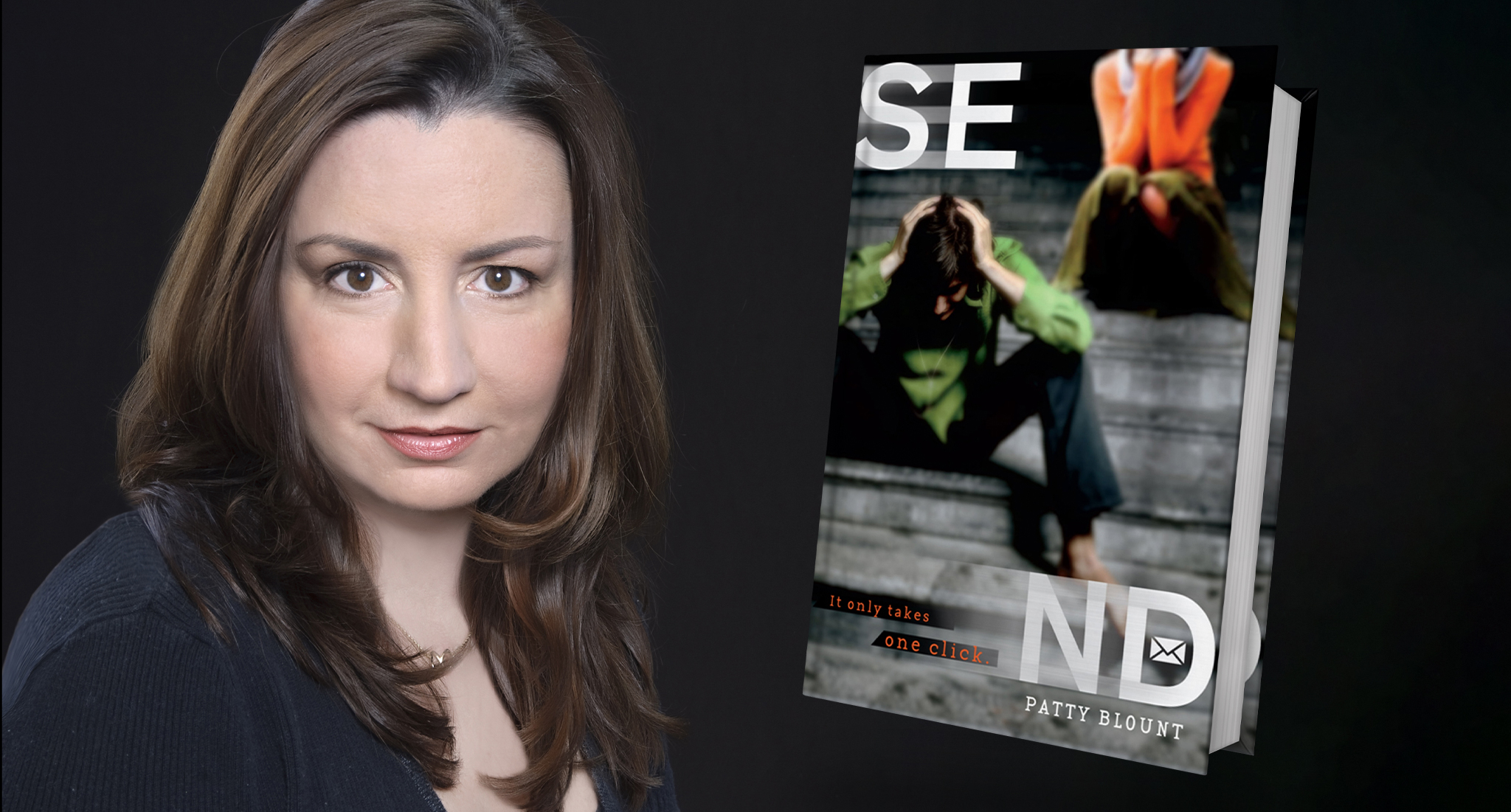 When he was 13, Dan Ellison was incarcerated for sending a humiliating photo of a classmate to all his friends – resulting in the student’s suicide. Now a high school senior, he has been on the move with his family ever since, seeking anonymity and a way to deal with his guilt.

This is the central conflict in Send, Patty Blount’s debut novel published by Sourcebooks in 2012. It’s a story that sounds all too familiar in today’s technology-driven world, where topics such as cyberbullying and online privacy have become hot-button issues. The novel’s powerful themes of forgiveness, mental health, and bullying in the modern world resounded across the country, earning it critical acclaim and the title of Northern State University’s 2022 Common Read book.

For Patty, Send is more than just a fictional story about a former cyberbully – it is also inspired by personal events. It all started in 2004, when her son was in sixth grade. “He had hit puberty early and was already way taller than all his classmates,” she said. “He suffered from acne, wore glasses and braces, and was already shaving. He was still a little boy, but he looked like a man. His classmates thought it was great fun to torment him for his differences.”

The bullying went on for months before Patty knew, until one day her son told her he no longer wanted to live. Though she was able to work with school staff to curb the behavior, she remains convinced she would be telling a much different story if the bullying had continued on places like Facebook and Twitter.

“My son is still alive because the bullying ended when the bell rang. Once he escaped that class, it ended,” she said.

Several years later, Patty’s boss encouraged her to incorporate social media into her job to reach customers in new, engaging ways. At the time, both Facebook and Twitter were still new to the social media scene.

“I could see how all these young people were using social networks to connect with like-minded people. But what was even more striking to me was how people were misusing them to do harm,” Patty said.

As she dug deeper, she discovered there were more and more cases of bullying happening online every day, and little to no laws to regulate them. That’s when she started to hear “whispers” –  a little voice in her head that would eventually turn into Dan, the main character of Send.

Though her son had been the victim of bullying, she began to wonder what the person on the other end felt.

“How would a kid deal with that kind of remorse? Can a bully earn forgiveness? What kind of man would he grow up to be?” Patty said.

In the decade that has passed since the novel’s publication, its message has only grown more relevant. Cyberbullying has evolved and mutated beyond the social media networks it originated from onto other platforms like SnapChat, YouTube, and TikTok. According to data from the Pew Research Center, more than 59% of minors have experienced some form of bullying or harassment online.

The COVID-19 pandemic that kept students out of classrooms and in their homes accelerated the use of technology and social media, and with it the prevalence of cyberbullying. According to L1ght, an organization that tracks online harassment, there was a 70% increase in cyberbullying in 2020-2021.

“I think cyberbullying can be more dangerous in some ways,” Patty said. “Because it’s more cruel, it’s sneaky, it’s thoughtless. So many people who click a mouse key do it without thinking about the person at the other end. The bully can follow you into all your safe places.”

Patty hopes anyone who reads Send and attends the Common Read event leaves with a greater understanding of the impact their actions can have, especially online.

“I really hope they can understand the internet is not just forever – it’s instant forever. You can ruin someone’s life in an instant, and you can’t respawn a new life like in a video game,” she said. “Even though we live so much of our lives online, they’re still real lives.”

You can pick up a copy of Send at the NSU Wolf Shoppe on the university’s campus. //

WHAT MAKES A COMMON READ?

The NSU Common Read Program has been a staple at the university since 2010, uniting students across majors in reading the same book during their first year of instruction. Every October, a Common Read committee consisting of students, faculty, and staff put their heads together to brainstorm ideas for the following year. Everyone is encouraged to provide suggestions across genres and offer feedback on the books chosen. Typically, the committee narrows the list down to the top ten choices and meets every couple of weeks until a book is chosen. Then, they begin contract work with the chosen author. That’s according to Kristi Bockorny, Associate Professor of Management and Honors Program Director.

Hits from past years include books such as Glass Castle by Jeanette Walls, Ready Player One by Ernest Cline, and The Hate U Give by Angie Thomas.

“In my opinion, the entire Common Read Program creates community from the book selection process, to the freshmen class reading the same book together, to bringing the campus and Aberdeen community together to hear the author speak,” Kristi said. “There are so many opportunities for collaboration and communication between students, staff, faculty, and community members.”

The program also allows students to hear about people’s experiences from all walks of life, and talk with the authors themselves. Patty Blount will talk with the Honors students in the afternoon the day of the event, and will also be available to sign autographs after the lecture.