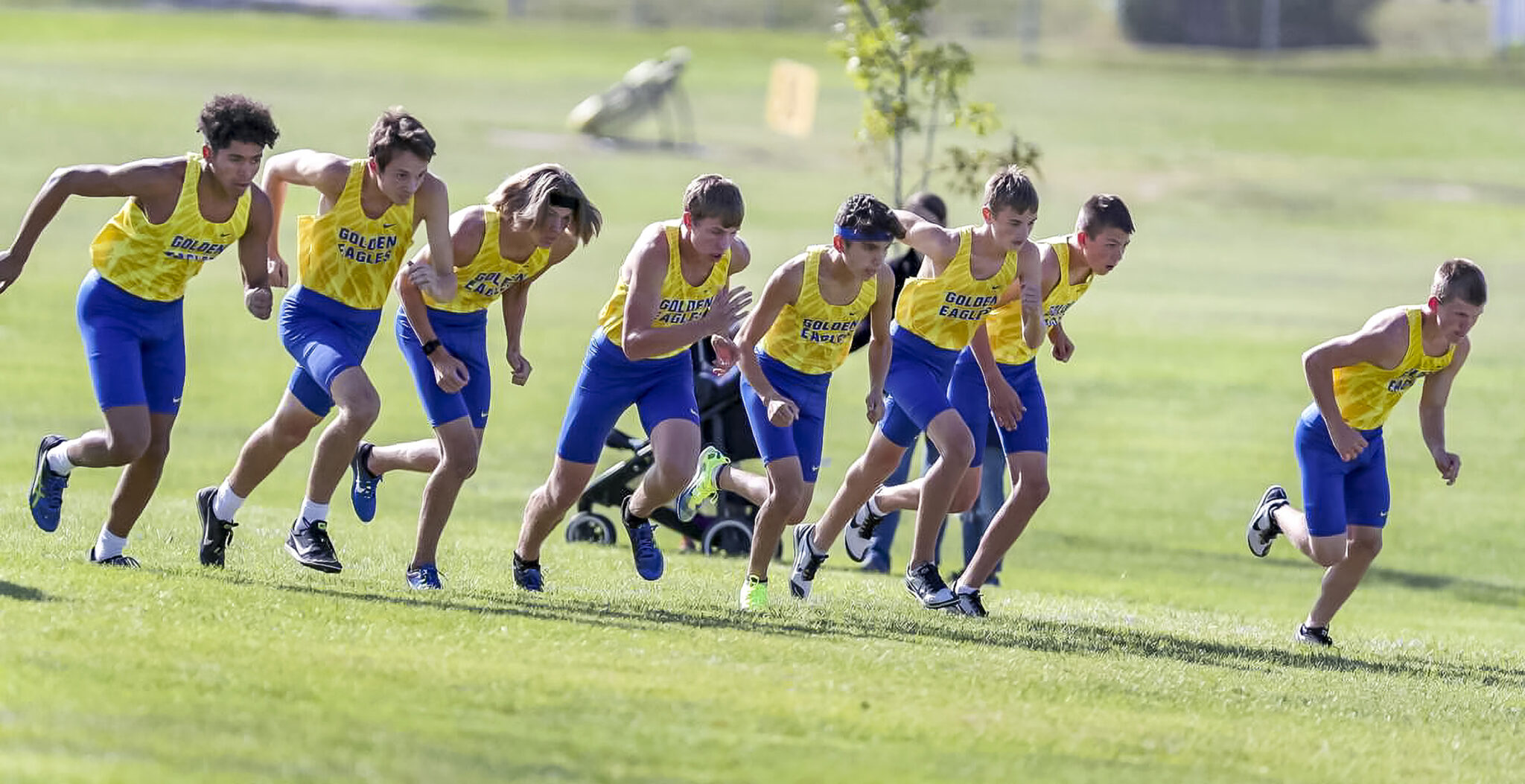 Unlike many South Dakota teams, Aberdeen cross country runners must find ways to deal with the flat local terrain on which they practice.

Never a runner, just a spectator, the best I could do was commiserate with my sons and other youngsters participating in high school cross country. On the golf courses and parks where meets usually took place, I plotted routes to be in the right spots to see my kids a few times during the race. I cheered for them and other runners, especially those struggling toward the back with whom I identified, particularly on hilly courses.

Except in Aberdeen. Here the races were typically at Lee Park golf course, where the terrain rolls a little, and the Soccer Complex, where you could see anybody from anywhere – because, like a soccer field should be – and the town it’s in – it’s flat.

“Aberdeen is as flat as a pancake!” confirmed Aberdeen Christian School’s head cross country coach Livia Inches. But neither she nor other coaches would blame Aberdeen’s flatness for the fact that Aberdeen’s teams have yet to claim a state team championship. That’s fair, because, as Central High School girls coach Bill Martens said, “Everybody runs the same course.” Having had a couple individual champions might argue against it too.

But What Is Cross Country—And Why?

For the what, let’s turn to the USA Track & Field definition of the sport:

Cross country running is a sport in which teams and individuals run races on outdoor courses over natural terrain. Races shall be run over courses confined, to the extent possible, to open country, fields, parks, golf courses, and grasslands.

That leaves out what these flimsy-clothed athletes run through. With a season from mid-August to mid-October, temperatures can range from over 100 degrees to sub-freezing. Stifling humidity, downpours, and blizzards are standard. And they run 5,000 meters. So again, why?

To learn the why, I visited with coaches and athletes. Martens has coached Central for 20 years, previously coaching 10 years at Roncalli High School. Greg Murley has coached CHS boys’ cross country for 12 years, starting his career at Roncalli when he was in college at Northern State University. Brady Lesnar is in his fourth season as Roncalli head coach. Inches is a first-year coach who has coached her runners in track.

A high school and NSU runner, Murley has “always had a thing for cross country.” Recalling running with his teammates, he talks with athletes today about the “shared suffering” of the sport. Personal experience is important for Inches too. “My parents signed me up for my first mile-long race when I was four,” she recalled. “Since then, I was hooked.”

Lesnar admits he didn’t really understand the sport “until I started coaching.” Agreeing with the others, he says, “It’s a lot of fun,” adding “there’s not a lot of drama. Either you can run or not.”

For student-athletes, the why can seem to have nothing to do with athletics but more about personal development, sociability, or goofiness. 2020 state champion and CHS ’22 grad Josh Martin’s high school goal was never to get detention, which wasn’t hard because “I’m a pretty chill person,” he said. Also, cross country “helped me learn a lot, and after my freshman year I never had a problem saying no to anything that would get me into trouble.” But he also added, “the part that got me hooked was the muffins at morning practice.” Jackson Harrison, CHS ’18, enjoyed eating out with his team and “dressing up in suits and ties. It’s silly, but it was something we all enjoyed doing and bonded over.”

Aberdeen Christian senior Rachel Beaner said “It’s challenging mentally and physically. There are many times when you feel like quitting, but if you keep going and finish hard, there’s a great sense of accomplishment.”

With balm, perhaps, for Murley’s “shared suffering,” Michelle Lesnar, RHS ’08 (and Lesnar’s wife) adds “It’s an uplifting experience to have not just coaches supporting you and teammates cheering for you, but also athletes from other teams pushing you on.”

There’s also a family dimension to Michelle’s memories, which always include “the same image in my head.” At a late season meet in Webster in 2004, the course layout allowed her “to watch part of my sister’s last stretch toward the finish line ahead of me.” They only competed together two years, “so watching her do well and finish out one of our last meets together has always stuck with me.”

Athletic accomplishments are also significant in the why, especially in adverse conditions. Murley, who has coached two individual state champions in 2018 and 2020 (with runners up in 2017 and 2019), recalls a blizzard at the 2020 state meet in Rapid City. “We had a kid who wasn’t favored to win,” he said, “but he overcame a lot and would not be denied and won the championship.” That kid, Martin, remembers, “it was so cold, tired and miserable at the end of the race I couldn’t even put my own gloves on to warm up, but it was all so worth it.”

That 2020 state meet was worth it for Brady Lesnar’s team too. “It was about 25 degrees for practice. Miserable. There were parts of the race you couldn’t see because of the blizzard,” he said. “I talked to the team about needing to show up. Everyone is running in the same weather.” While impressed with the team as a whole, he singled out freshmen twins Paige and Sarah Schmidt, who finished third and tenth, respectively.

Martens has had three teams finish second at state, and he points with pride to six Eastern South Dakota Conference championships, including four years in a row. Perhaps it’s not surprising, given that he’s had two athletes who were All-Conference six years straight, one who was All-State six years in a row, and two All-Americans – one earning it twice.

Inches notes Christian girls’ team “earned third place at the state meet last year and second place in 2020,” she said. “They don’t mess around.” Mostly, anyway. Freshman Grace Steger said that after the third-place finish, “It was so fun celebrating with my sister and Rachel. And then we could just watch the other races and not worry about ours. We also got Qdoba!”

For Michelle Lesnar, it’s a family thing too. Unique here as a working mother of four, her running now “is primarily chasing after my kids.” But she notes, “This was a sport my mom ran. I was able to run with a couple of my siblings and even saw cousins at different meets. Now having my husband coach, it feels a bit like a family sport.”

Martens is “also proud of athletes excelling in the classroom,” he said. “We teach that athletics is just an extension of the classroom. It’s great seeing them do well in classroom and taking studies seriously.”

Murley’s memories connect to the program’s development. For summer running, “some alumni show up to run, kind of passing it down.” When he took over, “The program was kind of weak, and some guys came along who were very committed to training and being good.” He credits that dedication for the program’s improvement. “We had 22 kids out the year before I started, and we have built it to more than 60.”

He also sees an accomplishment in what might otherwise be a disappointment. “In 2019 we had five of the top 12 kids in South Dakota but didn’t get the state title,” he said, omitting their second-place finish to Lincoln High School, which has a strong cross country history. “It used to be that people didn’t know we had a team. Now Lincoln says they like having Central to compete with. We haven’t won the big one, but now people don’t count us out.”

The Climb Up the Podium

Still, unlike most Aberdeen high school sports, cross country so far has no team championships but two individual champions. While coaches won’t blame Aberdeen’s flatness, they’re also addressing it. Martens says, “It’s hard to say flatland prevents winning. It may be a factor, but also some days, a runner feels good and some not. It’s kind of mind over matter.”

While all the programs have resorted to on the Second Street overpass to simulate hills, most look for other options. Inches said, “The Knights well be taking plenty of visits over to Richmond Lake to get in some good hill work throughout the season,” because “those hills are killer.” Brady Lesnar sometimes takes his team to Barrett Hill, the artificially built hill just north of town.

Strength and conditioning training also helps runners with hills. Murley credits Sanford Power and lifting every week with making them “better hill runners.” Still, “we’re conscious that as flatlanders we need to work on it.”

Whatever anyone’s individual why, these cross country athletes run to win – whether it’s a championship or a better finish than last time. That’s the carrot that keeps them going during the race. But wherever you are in the pack, running can be lonely. There with your own thoughts, you can learn a lot about yourself – or teach yourself a lot. Based on the athletes I’ve encountered, the kids are all right. //

Cross country is a sport of endurance. Photo courtesy of Stephanie Litzen.

Paige Schmidt runs in a blizzard at the 2020 State Meet. Photo courtesy of SDHSAA.