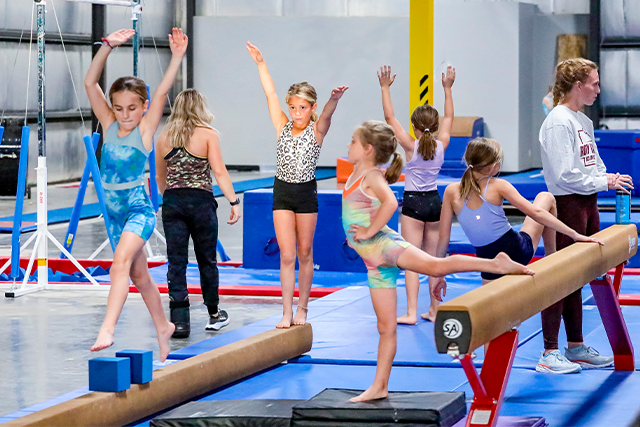 The Aberdeen Gymnastics Association has expanded its floor routine and vaulted to a new level.

The association has been around for nearly two decades, but now has a space to call its own. After sharing a space at Aberdeen Central, the AGA has moved to a new home that allows for more flexibility.

“They were great to work with, but their gym is so busy,” said Becky Biegler, President of the Aberdeen Gymnastics Association. “We kind of wanted more time in the gym, so we decided to go and see if there was a space available to be able to do that.”

After an extensive search, the association found an ideal spot. It is located in a former warehouse for Rea Hybrids to the north of the Aberdeen Regional Airport. While the space includes about 11,800 square feet, it is the vaulted ceiling that was the key to the space.

“We were struggling more with ceiling height than we were with square footage,” Biegler said.

The ceiling has to be at least 20-feet high to allow gymnasts to do their routines on the uneven parallel bars.

The warehouse met that requirement, and then members went to work to transform the area into a gymnastics training facility. It included carving out a seven-foot pit and two other four-foot pits into solid concrete.

The finished product features areas for all the gymnastics apparatus, including the only in-ground tumble track in the area.

“There is a spring every single inch for 40 feet on that tumble track, and we had to pull them all,” Biegler said. “It took 2-3 hours to put all that in.”

The gymnasts have made good use of that area so far.

“They have utilized it a ton for warmups,” Biegler said, “and if they’re working a harder tumbling skill, it’s just easier on your legs, because it’s a trampoline the whole length of it versus doing it on the floor.”

The AGA had a grand opening at the facility in August. Biegler said there are anywhere from 10 to 25 gymnasts who use the new space on a regular basis.

“The nice thing about being club is we’re not tied to the school, so any one from any area can come and use the facilities,” Biegler said.

The gymnastics association is not in competition with the Central gymnastics program. In fact, several members of the Golden Eagles team are coaches for AGA.

Biegler said having the additional facility should help younger gymnasts be able to hone their skills because they will now have a place to train year-round.

“Especially gymnastics, most of your new skills come in the off season. Whatever you’re doing during season, it’s perfecting your routine and the skills you already have,” Biegler said. “So, if you want to work to that new skill, the next skill, the next level, you really have to work when you’re not in season to do that.”

The AGA welcomes athletes from age 6 through high school. While the majority of the individuals who use the site are girls, Biegler said that the association has started to add some boys’ only programs.

The site can also be rented out in two-hour slots for things such as birthday parties.

When asked what her favorite part of the new facility has been, Biegler responded, “Watching some of the girls come in and see it for the first couple times and then start using it, and they’re like ‘Wow, this is awesome.’”

Part of the challenge that the association has had is getting the word out about the mission of the group. Having a permanent location should help that cause. Biegler said the response to the training facility has been positive.

As for the future, Biegler would like to see the association grow both in numbers and equipment.

“To start with, we kind of have one or two of everything,” she said of the current stations. “The goal is to get some more of everything as we keep going and growing.”

While the association has only been in its new home for several months, it has already been able to accomplish what the site was intended for in the first place.

“We’re able to have classes every night of the week if we want,” Biegler said. “We can have more girls in the gym at the same time.”

Biegler said that while the immediate plans don’t include any major competitions, the association already has hosted some camps and there are more in the works for next summer.

In the meantime, aspiring gymnasts now have a place to go to whenever they want to work on their skills.

“They can come train as often as they want,” Biegler said. “We’re not tied to anyone else’s schedule. We can make our own.”

Biegler noted that as with anything, the more time you spend doing something, the more proficient you will become at it. The same holds true for gymnastics and now young athletes will have that opportunity whenever they want thanks to a new home.

“It gives us more time in the gym,” Biegler said. “Like most sports, the more time you can put into it, the better you’re going to be.” //

More information about the Aberdeen Gymnastics Association can be found at www.aberdeengymnastics.com.