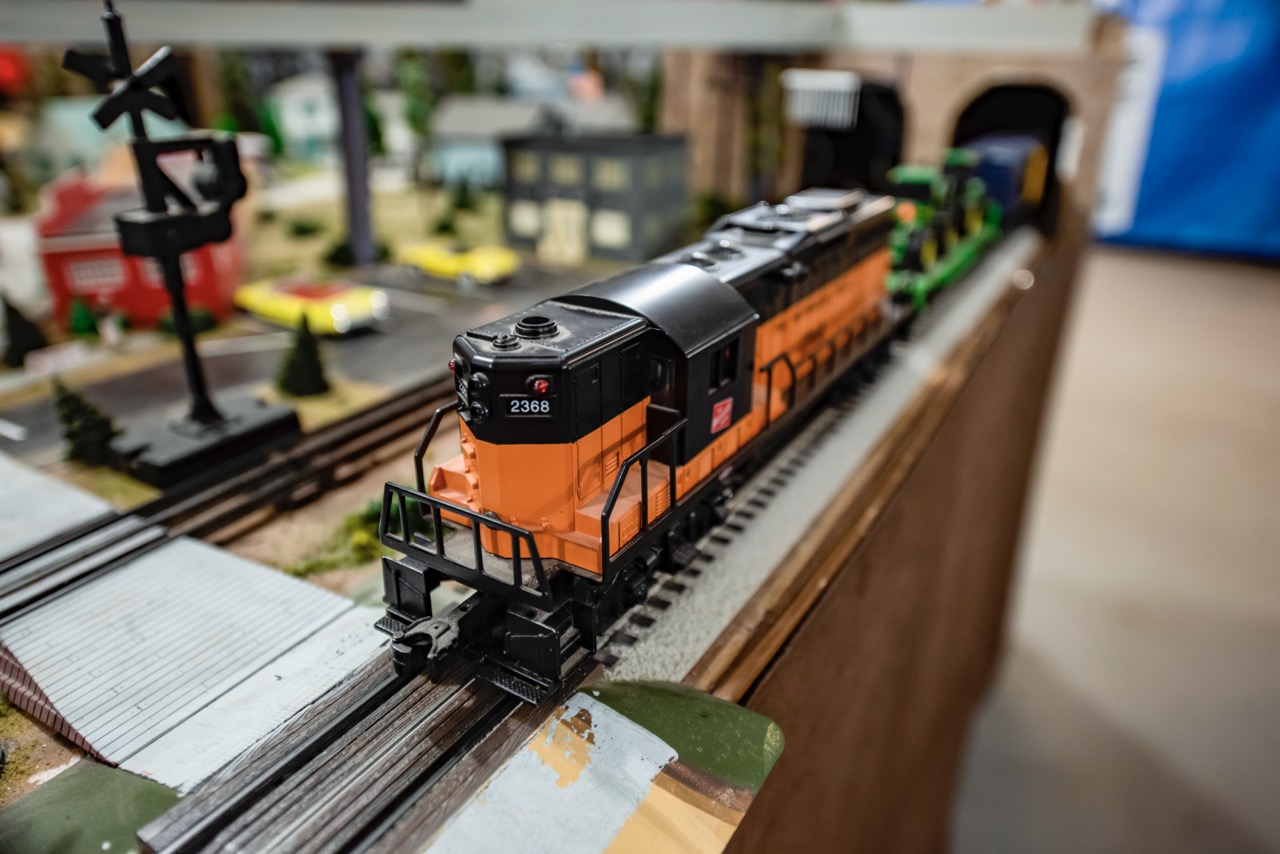 An all too familiar sight, a BNSF locomotive blocking the road. This HO scale version is just under nine inches long, which is about 1/87th the size of the real thing. Photos by Troy McQuillen

My first model train—a hand-me-down toy from my brothers—was a Lionel locomotive with a big wind-up key that ran on a track for maybe 30 seconds, unless it was pulling cars. Later, I got my own HO scale set of about six cars and an oval track. It was fun governing the train with a simple electric transformer—and a little hypnotic in its perpetual laps. Unfortunately, it soon got forgotten in the bottom of a closet.

Fortunately, some people have mastered the transition from play to hobby—and to making the track routes more entertainingly complex than my simple round and round and round. For adult model railroaders, the hobby has always been a passion, always something more than play and toys.

Celebrating its 35th anniversary, the James Valley Model Railroad Association (JVMRRA) was formed to “promote the hobby of model railroading and the history of railroads in Aberdeen and their role in Aberdeen history,” says longtime member Charlie Davis. While they’re “more successful in promoting the hobby,” history is central. Most members ‘model’ certain railroad lines by studying their history and acquiring their locomotives and cars. Tom Blanchard, one of the founders of the club, says, “The club was founded on learning—guys learned and taught” each other about the hobby and about railroads.

But what do the club members do? Other than occasional meetings, Davis says, “The guys come here to work on trains and work on the train layout.” The here is their clubroom in the old Milwaukee Depot at Main Street and Railroad Avenue. A layout is a large, scale model diorama of a railroad scene, which, in addition to trains and tracks, includes both city and country scenery, homes, businesses, factories, farms, animals, bridges, tunnels, hills, trees, and more. The four layouts the club owns take up nearly three-quarters of their 2,500 square feet.

To promote railroading, the JVMRRA brings it to the public and the public to it. For years, they took their show on the road, but now during most months of the year and weekly between Thanksgiving and Christmas, they open their wheelchair-accessible clubroom for free open houses. “People like to come and watch,” Davis says. “Lots of kids have never seen a train kit.”

Another reason for open houses, Davis deadpanned, is “to show off. That’s a big part of it. It’s an excuse to come down and have fun.”

There aren’t many requirements of JVMRRA membership beyond an interest in model trains. “A few members have no trains of their own,” Davis says, and “some keep all their trains at the club.” The club also owns some trains.

Interest in trains comes via different tracks for different people. Davis’ dad grew up with Lionel then HO scale trains, and so did he. He also acquired his dad’s appreciation for Great Northern Railroad trains. He jokes that even though he “swore no green engines,” he now models BNSF in addition to other Midwest railroads.

A JVMRRA member since age ten, South Dakota School of Mines & Technology junior Jordan Schmeig is also its youngest. “Tom and Charlie got me interested when they would set up at the mall,” he said. As a youngster, he went to the tracks in Bristol, watched the trains go by, and learned the cars and the lines. Not surprisingly, he mostly models area railroads. “I really enjoy that,” he says. “If it’s a South Dakota railroad, I have something from it,” he says, counting “at least a couple hundred freight and passenger cars.”

Mike Henning got an American Flyer train set in 1959 at age seven. When he moved to Aberdeen in 1974, “I was a lone wolf,” he says. “I did it all on my own.” When he joined JVMRRA, “There was more access to technology, then it took off.” He’s also the club’s main carpenter. Modeling the Duluth Mesabi & Iron Range line, he has about 450 cars, including 50 locomotives.

Jeremy Schmidt, age 28, has been with the club two years. “I was always interested in trains, but then I saw YouTube videos of trains and got hooked.” (These were not JVMRRA videos, but they are online too: see their Facebook page.) He has a small collection of Lionel O scale trains he keeps at the club.

Tom Blanchard, who has retired from the club, was a key part of launching it. In 1987, he had a model train shop in his basement, which “was really the primary place with equipment for an avid model railroader,” he said. Customers wanted a local club, so he helped organize a meeting in the Northwestern Public Service community room in November that year. A couple dozen people from Mobridge to Hecla joined, and JVMRRA was born.

After meeting in various downtown basements, the group decided to go on the road by creating modular train layouts that could be assembled for travel. “We handed out plans for modules of a large layout,” Blanchard recalls, “and members built them. That was the beginning of our layouts.” They displayed the 12 feet by 36 feet layouts at Super City Mall and later Lakewood Mall.

Eventually, in 2001, a logical place to call home emerged when the Blackstone Group, the Depot’s owners, offered it. First, the railroaders set up on the second floor. “We had five rooms,” Blanchard remembers. “There were holes in the walls, and we ran tracks through them.” After discovering asbestos, they moved to the first floor until remodeling forced them to the basement, an area filled with small offices. With the assistance of the Tom and Danielle Aman Foundation, the Depot’s current owner, and grants, the basement area was remodeled as part of the Depot renovation to create the Club’s current space.

The club room is part museum, part spectacle. Historic trains and antiques are on display while members’ cars buzz around the tracks. On the layouts, “you’ll see trains from 1940s to today,” said Davis, “depending on who’s running them.”

They’ve had various layouts over time. When Dr. ¬¬Mark Harlow offered what Blanchard called “a beautiful, beautiful layout” for O scale trains, a JVMRRA team had to cut it in pieces to transport it. That and another O layout take up about half of the club’s east room. Two HO layouts occupy about 75 percent of the west room.

If you visit the club during an open house, however, you will find unfinished portions of the layouts. The group recently implemented a several-year-old plan to redo the mountain area of the HO layout. At press time, they were still deciding how it would look.

The layouts are important, but it’s ultimately about what goes on them. The trains are the point, and they’re much bolder than my wind-up Lionel. Schmidt remembers his first open house “when we got the coal tippler going.” The tippler models a mechanism that secures a car to a section of track and then lifts and turns track and car to empty its cargo. That “got people’s attention,” he said. That animated car is just one of many, well, bells and whistles to be found in the club.

That might all suggest the hobby is an investment. It can be. To buy an HO scale model of the BNSF locomotives that go back and forth daily in Aberdeen, for example, might cost $250-$350 each (assuming it has sound, light, and DCC). The box cars, covered hoppers, and tank cars it pulls might run $25-$50 each. However, Davis insists, “there are many entry-level options for someone just starting in the hobby. It does not have to be expensive.”

Despite the costs, Davis and some others are committed to making their cars look realistic, including through “weathering” with paint and powders. “That’s a big deal to me,” he says and adds—again—“We all like to show off.”

Maybe inspired by a different kind of showing off, Davis also adds graffiti to some of his cars. In fact, he has sold graffiti decals he makes on eBay for about 20 years, noting, “The money helps feed my hobby.” Davis also makes decals of the work of Ichabod, the nom de graffiti of the infamous artist who has painted 5,000 cars, even receiving the mystery man’s blessings.

Verisimilitude is important in other ways too. Schmeig does considerable research to make his models historically accurate. To verify his work, he got decades worth of train photos that Davis had taken in Aberdeen. He also recently built a historically accurate caboose for a mining train belonging to a fellow club member.

There are currently 13 members of the JVMRRA, many of whom were there at the beginning. Over the years, they have had over 100 different members.

The JVMRRA members I spoke with said they want more members and to share the benefits. “Model railroading is a good family project,” Blanchard says. “My wife made all the scenery for my layout at home, and my son made the track.” And it’s not really hard, he added, “Visitors get interested in the layouts and think they can’t do that, but they can. Join and these guys will teach them.”

“Fewer kids are interested in model railroading,” Davis laments. “My boys were interested until Nintendo came in the house.” When Blanchard added, “There are too many distractions for kids these days,” somebody played an imaginary video game controller. A little later, Schmeig showed me how the DCC works, manipulating the remote—and looked like a gamer. It was amusing, but the train he controlled was a real three-dimensional object, some of which he might have made himself, running on a layout he helped build. No judgment—but also no points, no winners, and no heads blown off.

Davis says his sister, who “worked in the art world her whole life,” once told him, “’Model railroading is an art form.” He appreciated hearing that. “I think it is,” he argued. “In today’s world, so many people work at their job, and when they come home, they have no sense of accomplishment. They haven’t created anything.” Hobbies like model railroading “are important because they allow a person to feel like they created something with their minds and hands and their efforts that wouldn’t exist if they hadn’t done it.”

Then, from a different tack, he added, indicating the club room, “This is my own little world. I can control this world. I can’t control the nightmare outside. It’s an escape mechanism, and it’s a coping mechanism.”

Leaving the clubroom, I passed the upended mountain section of the layout. I wondered if they would ever finish it. That is, do they want to? Or will there always be another tweak to make—a new technology, a new locomotive, or a new creative whim? Like the trains running on those continuous tracks, I suspect the club members will keep chugging—and coping and creating. //

Model trains are built to a variety of scales to be proportionately accurate replicas of the real trains they depict. The JVMRRA has, at times, focused on three scales: HO, O, and N (although its N layout has been “mothballed,” Charlie Davis says).