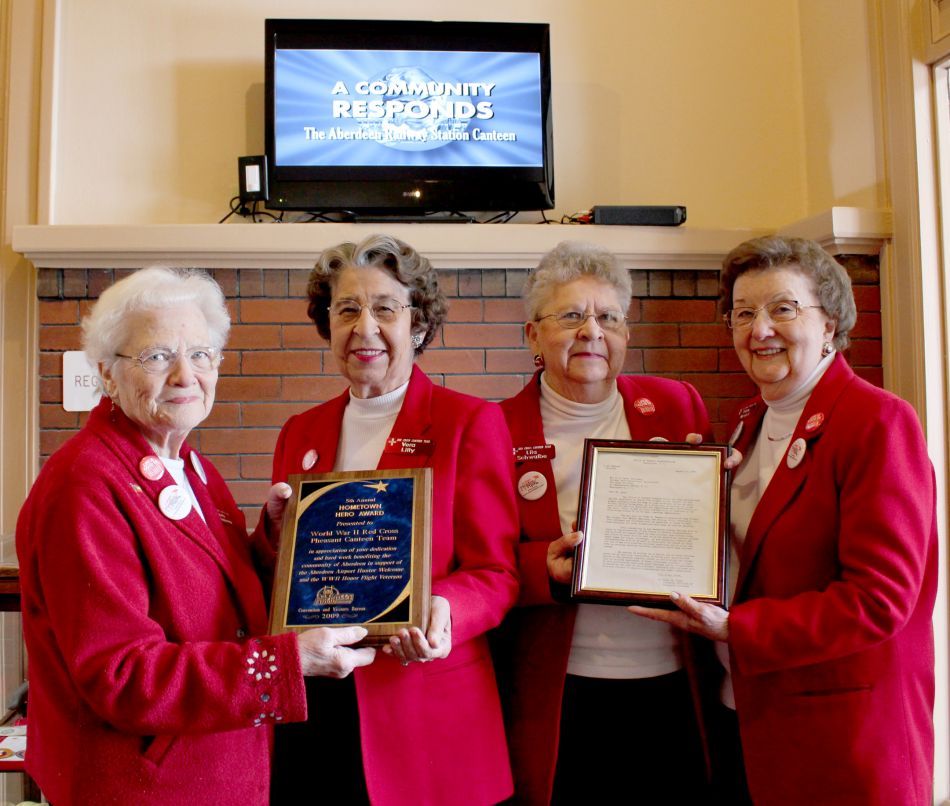 During WWII the railway was a major system of transportation. Aberdeen served as the “hub” where many of the railroads met, making the historic Milwaukee Depot a bustling intersection of both passengers and freight. Because of this, Aberdeen became a stopping point for service men and women traveling through on their way to and from war. The troops would arrive with empty bellies and had little time to leave the train station to grab a bite to eat. The genuine, hard-working folk of Aberdeen would not sit idly by while service men and women went hungry. So they devised a plan to support the troops of WWII with Aberdeen’s own brand of hospitality. Mayor O.M. Tiffany called the people of our town together and with the help of the USO, Red Cross, and many concerned citizens, the Aberdeen Railway Station Canteen was born. Space inside the Depot was donated for use as a full-service kitchen. Like the soldiers who dressed in uniform and headed off to war, local volunteers would suit up and head off to work at the Canteen.

The Canteen workers would sometimes put in 24-hour shifts to ensure a free meal got to every hungry soldier passing through. Food could be scarce in those days, but the Canteen presented its best, including such cherished rations as fresh butter, in order to create a hearty and wholesome meal. The typical menu began as coffee, sandwiches, pie, milk and soda. But word of the Canteen spread fast, and as demand grew, so did the need for more food. When locals heard that the Canteen was running short, area farmers responded by providing pheasants. A chicken salad-style sandwich was created from the pheasant meat and troops around the world began buzzing about Aberdeen’s special treat.

Today, the iconic pheasant sandwiches are still revered in the memories of many of those who passed through the Hub City on their way to the unknown. When the war was finally over, the Aberdeen Railway Station Canteen closed its doors on March 31 of 1946, after two-and-a-half years of service. But this would not be the last time Aberdeen would experience the spirit of hospitality embodied by the Canteen.

The rebirth of the Canteen would start many years later with “a coffee conversation” amongst a group of women who each played a role in the WWII Canteen. One of the women, Vera Lilly (our cover girl for this issue), was in high school when the Canteen first began in 1943. “The young men and women who got off the troop trains didn’t know what the future held,” said Vera. “Yet, they were up, they were cheerful, and when they came into the Depot it was like a big party.” Two other group members, Ruth Casanova and Patsy Weigel, were young girls at their mother’s sides when they helped serve meals in the WWII Canteen. “As they would arrive, the troop trains would put out all this black smoke into the air,” said Ruth. “They were coming hungry and knew there’d be free food.” “All these military people flooding in, you could feel the excitement in the air,” said Patsy. “These young men, they were just boys, but to me they were heroes.” As the women reminisced about their days spent serving those pheasant sandwiches, they began to realize the important part the WWII Canteen played in Aberdeen’s unique history. And with that realization, they proudly took it upon themselves to preserve its legacy.

Lila Schwalbe was a child living in the country in Minnesota. She didn’t get the opportunity to help with the Canteen during WWII. But as an adult, while volunteering with a group called the Red Cross Grey Ladies, she came upon information about it. Then in 2005, these four ladies, along with another friend named Marilee Frankenberger, came up with the idea to resurrect the old tradition.
Around this same time, one of the original canteen workers named Blanche Lindsay passed away. While sorting through her mother’s things, Blanche’s daughter, Kay, came across several old Canteen uniforms, pictures and memorabilia. She contacted Patsy and offered to donate them to the cause. The historic Milwaukee Depot was being renovated, thanks to the Tom and Danielle Aman Foundation, and the Canteen ladies approached them with an idea of including an historical display of the WWII Canteen within the Depot. With support from the community, the five women suited up in red coats to represent the mission of the Red Cross, and went to work recreating a life-sized display. Another such display was put up by the Dacotah Prairie Museum in 2006 and remains there currently. For those involved in the war and the Canteen, the displays serve as a proud memorial to the sacrifices made.

Today’s service group calls themselves the WWII Pheasant Canteen Team. They are small in numbers but big in heart. The current group made up of four members includes: Ruth Casanova, Vera Lilly, Lila Schwalbe, and Patsy Weigel. Their fifth original founding member, Marilee Frankenberger, has since moved to Ft. Collins, Colorado, but keeps in touch. The four ladies that make up the Team continue to volunteer in the spirit of service by serving pheasant sandwiches and providing information on the historical importance of the WWII Pheasant Canteen to the community. At the Historic Milwaukee Depot in 2006, they served 300+ pheasant sandwiches honoring the 60th Anniversary of the Canteen’s closing. In 2009, the Team served sandwiches to 160 surviving WWII veterans before departing on an “Honor Flight” headed to Washington, D.C. And in 2009, 2011 and 2012, with an invite by the Aberdeen Convention and Visitors Bureau, the Canteen Team served “authentic” pheasant sandwiches at the Aberdeen Regional Airport to excited pheasant hunters flying in from around the world. “These young men, they were just boys, but to me they were heroes.”

The Team hopes to keep the spirit of hospitality alive that has been embodied by the Pheasant Canteen. The WWII Canteen was a gesture of generosity and a way to say “thank you” to service men and women for their sacrifice. Today, the WWII Pheasant Canteen Team has a mission that is three-fold:

1. To keep the history of the WWII Canteen alive by teaching children and the community about the sacrifices our service men and women have made.
2. To reiterate the importance of showing appreciation through hospitality.
3. To say thank you to all those who have served, and continue to serve and protect our country.