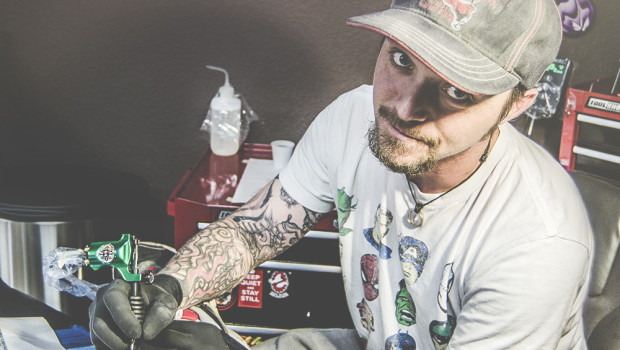 Published on November 17th, 2014 | by AberdeenMagazine

Tony Wilson, owner of Shrunken Head Tattoos, has been creating walking works of art by tattooing the living canvases of Aberdeen since he was 18 years old. “It all just kind of fell into my lap. I had an opportunity and I took it,” he recalls. Five years later, in 2004, Tony decided to open his own Aberdeen shop, called Shrunken Head Tattoos. Tony understands the permanence of his work, and that there is little room for mistakes. “Tattooing is different from other art forms in that you can’t erase and you can’t start over,” Tony notes. “Once it’s there it’s there.” When asked what the most challenging part of his art form is, Tony replies, “Tattooing takes a surprising amount of concentration and puts a lot of physical strain on one’s body.” He’s learned to pace himself over the years to avoid tattoo artist burn-out.

In addition to tattooing, Tony also enjoys sketching and painting, but, despite its added challenges, tattooing remains his one true passion. Tony says he enjoys a variety of tattoo styles, from traditional Japanese to black-and-gray, “My style is kind of all over the place. I love realism but I also love a ton of other styles. The inspiration for each tattoo is all about the customer.” This is why Tony avoids assigning titles to his works of art. “I feel that even if I draw the design, it is each individual person’s art, so I leave it up to them to name it if they want to.”

I get to express myself through art in other peoples ideas, and there in no better feeling than having your art on someone for the rest of their life.

It Takes a Team in South Dakota Sports →