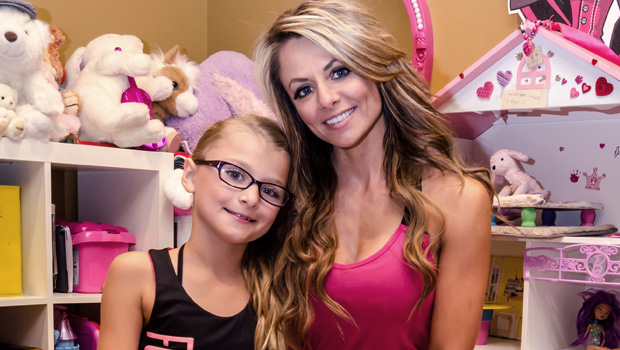 Up to the Challenge

Nikki Walter is a BodyBuilding.com athlete, a fitness model, a clean eating coach, and a media specialist for KSFY. But above all, she’s a mom. And according to her eight-year-old daughter Addison, she is the coolest mom ever.

Nikki grew up in Holabird, SD, and graduated from Northern State University. After living in Minneapolis for a short time, she moved back to Aberdeen, got married, and took a job at the Chamber of Commerce. Nikki had always dreamed of going into the fitness industry, but felt the timing wasn’t right. However, after her husband Nathan was diagnosed with cancer, and eventually passed away in 2011, she began to look at things differently.

“The whole journey of his illness was eye-opening for me,” says Nikki. “You hear people that go through situations say ’life is too short, live it while you can’, that type of thing, but you never understand it till you go through that.”

During the ordeal, Nikki and Addison’s faith in God was strengthened, and Nikki’s commitment to a healthy lifestyle for her and her daughter grew. Inspired by the people she met in the cancer ward, and friends and family who had supported her, Nikki decided to pursue her dream. She hired fitness coach Brandon Fokken and began training for her first fitness competition, which she entered in 2013 and won, despite her inexperience. Encouraged by her coach, Nikki entered the 2014 BodyBuilding.com BodySpace Spokesmodel Competition. She placed 4th overall and was signed on as an affiliate in May.

As a single mom, Nikki wants to make sure that Addison is a part of everything she does, whether it’s teaching snack prep for kids at the clean eating parties they host, or tracking progress and picking outfits for her next competition. Addison has even appeared with her mom on BodyBuilding.com and on their YouTube channel, which has earned Addison a few fans herself. Addison isn’t able to travel with her, however, and Nikki is especially grateful for her support system, including friends and family like Grandma Judy, who help out when she’s away.

Nikki hopes to see perceptions change about bodybuilding and fitness competitions. She acknowledges that there are negatives and positives in bodybuilding, just like any other industry, but says her goal is to be true to her values and inspire others. Nikki uses her platform as a sponsored athlete to encourage people to set goals, work hard, and go after their dreams. “My advice to everybody is if there’s something you want to do you should do it, because it doesn’t matter what age you are, what race, or how healthy you are, your life could end today and it’s not our choice. So love the people you’re with, have quality time, and do the things you need to do. Live with no regrets.”