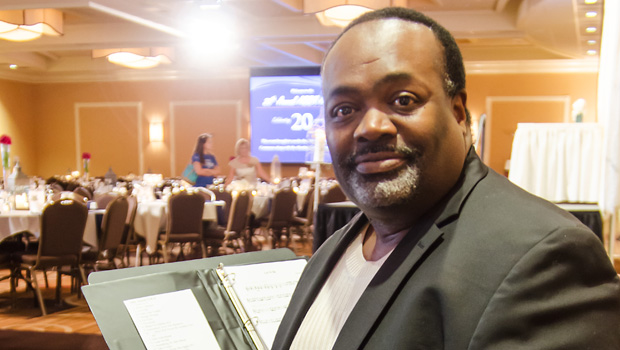 If you haven’t heard local musician Ron Parker perform yet, there’s a good chance you will soon. With his ease at the piano, soulful vocals, and infectious personality, he has earned a reputation as one of the most versatile and entertaining musicians in the area.

Ron first moved to Aberdeen in 2006 to help a friend start a church. After working as an associate pastor for two years, he decided to branch out on his own. Ron considered leaving Aberdeen, but with teenage kids in school he was reluctant to move. “Doors began to open that allowed me to work as a self-employed musician,” Ron says. “And I’ve been very happy doing it for the past five years.”

Making a living playing music can be a challenge, especially in a smaller town. “I’m not sure if there is really such thing as a full-time musician in the traditional sense of the word,” observes Ron. “If you want to play an instrument or sing for a living most musicians need five money-making outlets at any one time.” Ron divides his time between teaching private lessons, directing at Central High School, providing accompaniment for Northern State University, working part-time at Bethlehem Lutheran Church, and playing various gigs throughout the month.

“I play all kinds of gigs,” laughs Ron, “parties, banquets,weddings, receptions, funerals, restaurants, clubs, but my favorite are church services! I also perform in retirement facilities and nursing homes.” Depending on the occasion, he will play and sing either jazz standards or hymns. For just one man and a keyboard, he has a great way of engaging a crowd and creating the right atmosphere for an event.

Despite his busy and sometimes unpredictable schedule, Ron also has several other projects in the works. “I’m very excited about the ’Community Worship Event’ I’m working on with Josh Latterell (of The Journey church) coming in February or March of next year. I’m also performing around town with Velvet Soul, a four piece jazz combo that my good friend and singer Matthew Harmel and I are partnering on.” Ron also just released a gospel album called The Power Project that will be available on iTunes soon.

Over the past five years, Ron has performed with some of the best musicians in the state, including saxophonist Tyler Pridey, drummer Doug Rezac, and singer Kellyanne Kirkland. He is grateful for the opportunities Aberdeen has given him, and for the chance to share his story, “Publications like yours that celebrate local happenings is just one more reason why living in Aberdeen is so great!”