Buildings
Structures of Grandeur; A Souvenier of Aberdeen
By Aberdeen Magazine | November/December 2014 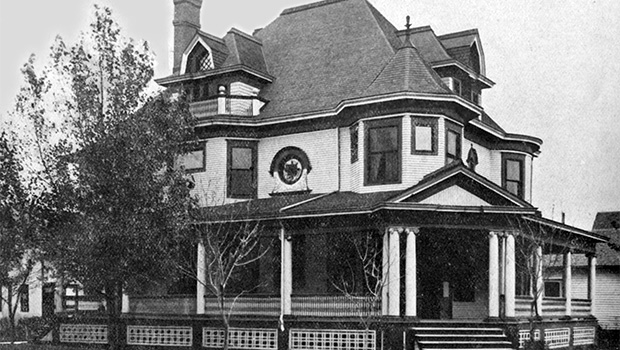 Homes that Once Boasted Aberdeen’s Finest.

If you wander into the Dacotah Prairie Museum, you’ll find a lot of interesting things from Aberdeen’s past, even in their bookstore! Grab a copy of A Souvenier of Aberdeen: The Railroad Hub of the Dakotas, a reprint of a book published by Aberdeen in 1907. This book was originally printed as a sales tool to show the folks back East how sophisticated and upscale Aberdeen was becoming in just under 30 years. The great thing about this reprint is that it is annotated by the late, Aberdeen historian, Don Artz. Don regularly researched old Aberdeen newspapers at the library, pouring over their contents, jotting down facts he found interesting about Aberdeen’s movers and shakers. He noted these discoveries throughout the pages of this book, details such as where those folks lived and worked, and the ways in which they contributed to our great city.

One detail of particular interest within the book is the plethora of photographs documenting Aberdeen’s countless huge, swanky houses. Many of these homes are still around today, though you might find some of them are hard to recognize, as they’ve since become masked by overgrown trees. Go for a Sunday drive and zigzag through the one way streets between Sixth Avenue and Northern State University. If you look closely, you’ll be able to spot several of the houses that are pictured in the book.

The house shown here (from page 58 in Artz’s book) was built in the Queen Ann Victorian style, and was no doubt quite colorful. It still stands on the corner of Seventh Avenue Southeast and South Washington Street. It was built for Walter Mason, a successful probate attorney and avid historian. The house included quarters on the third floor for servants, who definitely would have been needed for a house of this size. Many may recall an odd, now removed structure behind the building, that appeared to be an addition of motel rooms. I vaguely remember signage for the inn. If anyone has any more facts about this beauty, please share. This great house has been converted to several apartments, as so often happens with these homes near NSU. Stop in to the Dacotah Prairie Museum and pick up your copy of A Souvenir of Aberdeen: The Railroad Hub of the Dakotas. Then take a nice scenic drive through the streets of Aberdeen’s history. As you pass by the Mason house pictured here, look closely so as not to miss some of the home’s original details, such as the stained-glass porthole windows. Luxuries such as these could at one time only be afforded by Aberdeen’s finest.