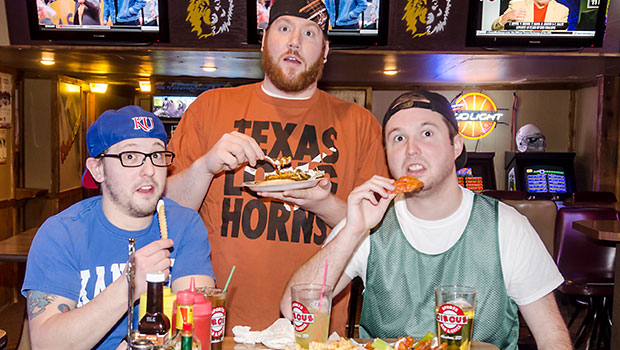 When doing weird things is normal

It’s that time of year again, BABY! College basketball’s biggest month is upon us, and everyone is waiting to see who’s going to be crowned champions of the NCAA tournament.

Along with all the excitement of the game comes tradition that spans from creating a perfect bracket to wearing that same old jersey for good luck that your significant other has tried to throw out for years, to going to your favorite bar to watch the games in the same seat at the same table eating the same food year-after-year.

There are fewer people in the world more superstitious than a sports fan. It’s a commonly held belief that breaking tradition can mean the end of a winning streak, or, worse, the loss of a season. No sports fan wants the weight of that on their head.

I asked local March Madness enthusiasts to share with us some of their time-honored traditions, and this is what I found. Some traditions are common-sensical while others are, well, you be the judge.

Perhaps the most popular tradition is the craze of filling out a bracket to determine this year’s winner. Fans usually do it for the gamble of winning money. Whether it’s a hundred bucks between some friends or millions on websites like ESPN, sports fans love the competition. Most have interesting ways to guess who will win each game, because sometimes that’s exactly what it comes down to – a guess:

Once my personal bracket is in and the games are on, my superstitions rear their heads. Looking further into local superstitious traditions, I found that not only am I not alone, but superstitions are the norm:

Where people go to watch the game is just as important and wrapped in superstition as anything else. Things such as where they sit and what they eat or drink can determine whether or not their team wins or loses.

Watching the games in public is the riskiest thing you can do. Since the tournament is full of upsets, if you’re a fan of a high-seed, your team will first be playing ones that are technically “inferior” to them. There’s nothing worse than experiencing the agony of defeat to a lesser team in front of your friends at a local bar. They’re not the most sympathetic during March Madness.

Moral of the story is, we all do weird things. The tournament just gives us the excuse for it to be normal for a month.