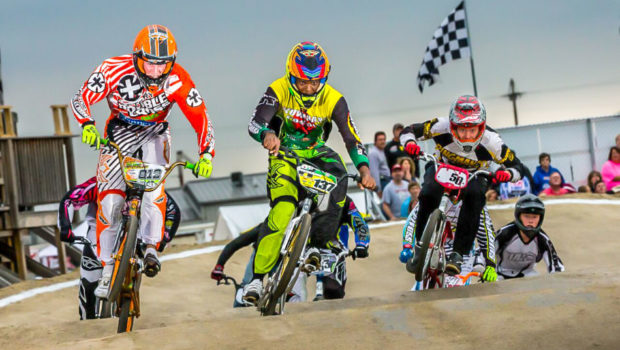 Published on June 27th, 2016 | by AberdeenMagazine

The Aberdeen Exchange BMX club celebrated its 30th anniversary this past year, but the organization shows no signs of slowing down. In fact, the club is actively preparing for a substantial facility and track expansion so it can welcome more riders to the sport. And if you think only professionals can compete on their bike racing track, think again. They currently have both male and female riders ranging in age from just two years old to 50 plus years old racing in subdivided categories.

Part of the reason why they have such a diverse group of riders is because the club is run by volunteers who follow the slogan, “No one sits on the bench.” If you can ride a bike and want to participate on race nights, you will be on the track. BMX racing is an individual sport and you can find both nationally known competitors and beginners out to just have fun on the Aberdeen track.

One volunteer who has been with Aberdeen BMX since its beginning is director Kyle Oswald. When he was nine years old, construction on the BMX track began in the area close to his house in Aberdeen. As a kid who loved riding his bike, he ventured over to the new track and has been there ever since. In 1998 at age 19, he took over as the club’s director and still volunteers in that position today. The club is completely run by committed volunteers like him who help out with practices, tasks on race nights, and everything in between.

When you hear Kyle talk about the Aberdeen BMX club his enthusiasm for the sport and its positive impact on the riders and community is contagious. However, there is an obstacle that the club has faced: location. The bike racing track has always been positioned behind the Aberdeen Boys and Girls Club building along First Avenue Southeast. However, during the next two years the Boys and Girls Club will move in to a new building and the Aberdeen BMX club will tear down the old building to make room for an expanded track and parking lot in its place. This move will make it possible for club races and events to be visible to passing traffic along First Avenue Southeast for the first time. Oswald says the club is already known as one of the best in the U.S. in terms of how the organization is run and for keeping a top-notch facility and up-to-date racing equipment. The club is hopeful the upcoming new site expansion will increase exposure to their sport even more.

The Aberdeen BMX club’s season begins the first week of May and ends the last week of September. During this season, races are held Thursday and Sunday evenings with registration from 6:00-7:00 PM and races starting at approximately 7:15 PM. The club also reserves Tuesday nights for riders to practice on the track. Everyone in the public is welcome to come out and enjoy the adrenaline and excitement on race nights. For more information on the Aberdeen BMX club contact Kyle Oswald at 605-216-1910 or email kyle@aberdeenbmx.com. More information is also available on the club’s web site at www.usabmx.com/tracks/1075. // – Jennifer Roth

Bird is the Word →

Giving Back in a Time of Need →

An Exchanging of Ideas for Community →