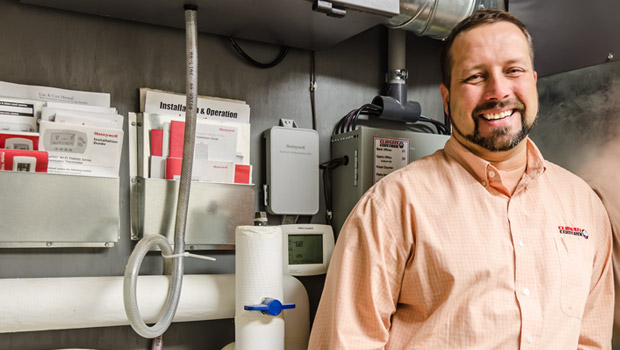 A Local Business Owner Who Always Rises to the Challenge

How long has Cam Schock been in the plumbing and heating industry? You could say he was born into it. Cam’s father was a plumbing and heating contractor who owned Schock Plumbing and Heating in Eureka. Cam began working with him when he was a teenager and realized he enjoyed it a great deal. After spending his high school summers working for his father, he went off to college and earned a degree in Engineering, and soon turned his summer job into a full-fledged career.

However, his education and experience soon became something of a liability when he realized that the work he had enjoyed so much as a young man had become second nature. All the challenge had gone away. Cam soon realized the only way to bring it back was to go into business for himself. But as many small business owners know all too well, that’s easier said than done.

Starting any business has one chief obstacle: capital. Cam’s solution to this problem was to start with a smaller venture. Specifically, selling liquid ice melt to commercial properties. Cam grew this business for seven years, and even expanded to include dust control for gravel roads using much of the same equipment, until finally Climate Control was born.

Cam was lucky. He was able to start as an hourly employee and grow into a small business owner. However, he had learned in the process that not everyone has that same shot at success. Cam noticed that, for whatever reason, many contracting companies don’t have much of a career ladder or room for growth with their employees. He wanted to do something so that everyone in his company had a way to do better for themselves and believed the way to achieve this was to create opportunities for people to work up through the company and one day be able to do whatever they wanted.

“I always want everybody to understand that they have something that they’re working for.” Cam believes people shouldn’t necessarily be stuck into the position they we’re hired into. For example, someone who was hired as an installer could work toward moving to service, someone in service could move to dispatch, and so on and so forth. The belief boils down to challenging yourself everyday, because if there’s nothing you’re working towards then what’s the point? But how does all this translate to the customer?

“I really think we’re a service company rather than a contractor.” Cam believes that it’s their level of communication and promptness that really sets them apart. New clients are sent out video introductions for the professionals who will be helping them, before they get there. Clients will be able to see what they look like, sound like, and what they will be driving. That way, even though you’ve never met them before, it won’t feel like they’re letting a stranger into their home.

Cam Schock and everyone at Climate Control don’t really do a lot of large contract work; most of it is relatively short term. But why? It’s because smaller scale jobs make the personal touch that they provide for their clients not only easier to achieve but much more valuable. // – Sean McCracken