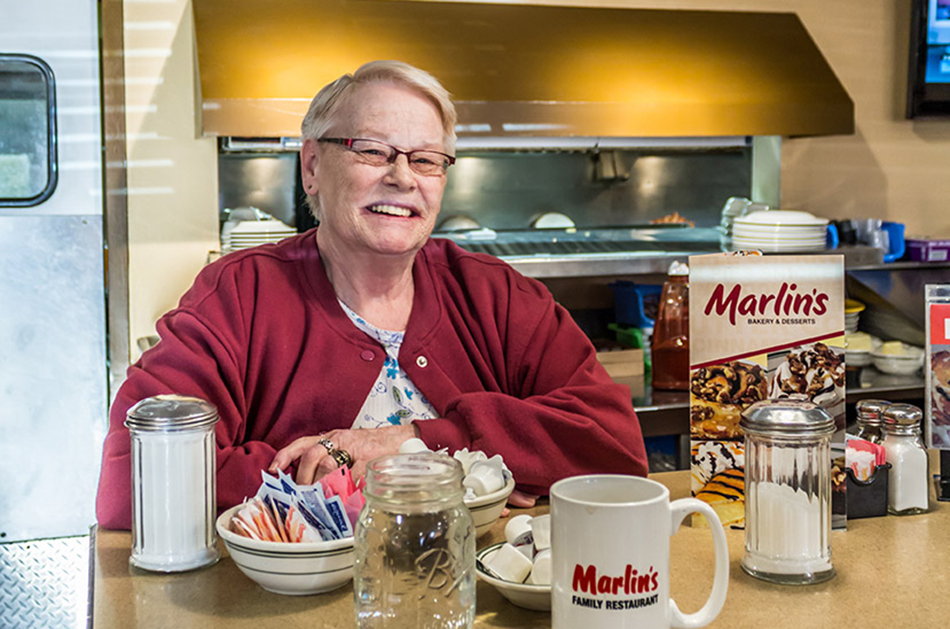 Little did anyone know that on July 14th, 1954, an Aberdeen icon would be born in Nome, Alaska.

Gloria Tostenson is one of the overnight servers out at Marlin’s Family Restaurant, and has become one of the most beloved faces for the customers who frequent the establishment between the hours of 10:00 PM. and 6:00 AM

Although she has been with Marlin’s for eleven years, Gloria did not start her career as a server here. Her parents moved to Milbank, South Dakota with her and her siblings when she was a young child because her dad was a traveling cook. Milbank then became her hometown, as she would spend the next 35 years growing up and building her adult life there.

Unfortunately, she lost both of her parents by the age of 13, but her future husband, David, luckily lived three houses down the street and his family already looked at her as a daughter of their own.

Gloria’s career as a server began in September of 1972 at the Brite Spot Café in Milbank, before she graduated from Milbank High School along with David and his sister in 1973. During her time at Brite Spot, she learned how to do anything and everything while making 75 cents an hour. She continued her serving career at Dairy Queen after Brite Spot Café closed.

At Dairy Queen, Gloria said she had fun working in “the old days where they had the car hops outside.” From there, she went to the Millstone in Milbank where she would run the restaurant with David and make everything from scratch, including the salad dressing. Her next serving job was at Trevett’s Café, where Gloria made the transition to the overnight shift to serve the bar crowd in Milbank. Since then, she has never gone back to day shifts. “It’s a lot of fun,” she said. “It takes a special person to work on overnights.”

She married her longtime friend, David, in March of 1981. When they received a job offer from Mother’s Café, they packed up their stuff and moved to Aberdeen with their daughter, Jennifer.

Gloria says that Jennifer was one of the best things to happen in her life. Originally, doctors told her that she was unable to bear children. However, one night she wasn’t feeling too well, so she went home from work, unable to tell what was wrong. Eventually, she went to the hospital to get checked out, and an hour later, the “Miracle Baby” was born. Jennifer weighed only four pounds and eleven ounces when she came into the world. Gloria apparently carried her daughter for the full term, but didn’t know she was pregnant since she didn’t see any difference in her body. She still wonders about the generous person who used to leave diapers in her car every week, because she and David weren’t prepared for Jennifer’s arrival at all.

After Mother’s closed, Gloria worked at Giovanni’s Pizza for a while and then at RG’s, where she spent 14-and-a-half years serving before finding her home at Marlin’s.

Throughout her time at this Aberdeen truck stop, she has seen a variety of things and served a variety people, including a couple trying to have an intimate moment in the women’s restroom, country music artists, and more than a few sassy people from the bar crowd. And though it is fun work, she’s glad that cops are her best friends, especially when dealing with some of the rowdier crowds.

While at Marlin’s, she has acquired quite a few affectionate nicknames. “Granny” and “Mom” seem to be pretty straightforward, but the last one, “G-String,” is by far the most interesting. She acquired this last nickname from a coworker who kept trying to get Gloria’s attention. When she wouldn’t answer to “Gloria,” her coworker tried calling her “G,” but that didn’t grab her attention either. Finally, her coworker yelled “G-String!” and sure enough, Gloria looked right over!

Above all, Gloria says she enjoys Marlin’s because of the people she works with. They all work as a team to get the job done, and the dynamics are good. She also appreciates being respected as an experienced waitress. Though she had a problem with her leg earlier this year and was out of work for a couple months to recover from her surgery, when she came back, the crew worked just as well as it did before.

“You have to like what you do. And you can’t just think of it as being ‘oh, I gotta go to work tonight’. You gotta think of it as you’re going because that’s what you enjoy doing. And I do enjoy coming here.” Gloria noted about working at Marlin’s. She has a good attitude about her job and learned to “shower [everyone] with kindness” over the years. Determination has helped her get to where she is now, as she proudly states that, “I’ve just had a good life being a waitress… I’ve done well for myself. People from when I first started said I would never make it, and I’ve proved them wrong. That’s amazing to me.”

So far, Gloria has worked in the serving industry for almost 45 years and feels a special connection to her parents because of this career choice. “My dream, in my lifetime, is to hit 50 years of being a waitress,” she said. “If my legs let me do it, I will make it.” Let’s hope she will get there since she is only about five years away! Then, she might be able to retire to Nashville to be with her daughter and get to see some of her favorite country artists! // – Holly Holborn