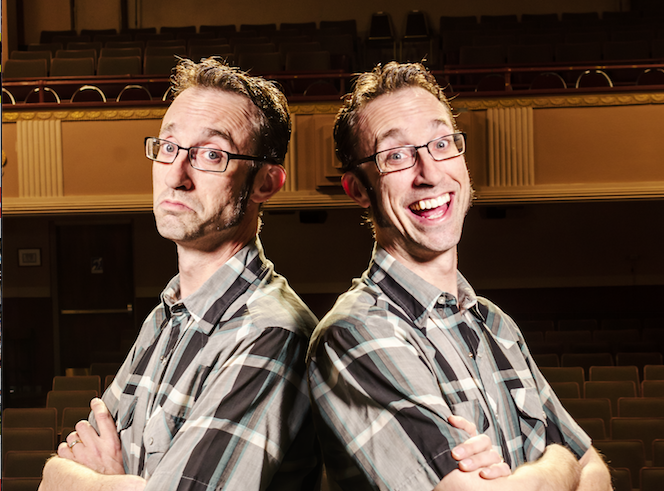 Brian T. Schultz directs every show at the Aberdeen Community Theatre (ACT) like it’s his last. “That’s how I approach my work. I could get hit by a bus tomorrow or the world could end, so why wait? Let’s do it now,” he said.

That’s why, the moment the inspiration strikes for a new show, Brian acts immediately. This go-getter attitude has allowed to him to perform all kinds of successful shows, earning him a reputation among community children since he first joined ACT in 1996. Now, he is the Associate Artistic/Managing Director of the theatre, and has no plans of slowing down anytime soon.

However, Brian didn’t always want to get into show business. He initially came to Aberdeen to pursue marketing at Northern State University. At the time, his only theatre experience was a show he participated in during his senior year of high school. “I was always too scared to try, but then I thought, this is my last chance, if I don’t do it now, I never will.” His freshman year of college, he tried out for NSU’s production of A Midsummer Night’s Dream, and slowly began to realize the theatre was where his true passion lied. In the summer of 1996, he volunteered for ACT’s production of Oliver! and began consistently performing for both the community theatre and NSU.

During this time, it was the people Brian worked with that inspired him to keep going. “They were terrific and very welcoming,” he said. “I was really cash-poor at the time. So many people took me under their wing and kept me alive.”

In his last couple years of college, Brain started his own children’s theatre program and traveled around the area doing a series of workshops and camps. While doing a production camp in Redfield, Jim Walker, the Artistic/Managing Director at ACT, came down to see the show and asked Brian if he would do the same thing for the kids in Aberdeen. He was brought on board in September 2001, and the rest is history.

Although Brian directs the shows for the Young People’s Theatre program, he is a teacher first and foremost. It’s his goal to take a group of people, some of which have never set on foot on stage and some who are already quite experienced, and get them all to the same place by the time the show opens. To do this, he tries to instill professional level habits while working hard to ensure the experience is as positive as possible. “Kids can perform and put on a show just as well as any adult,” Brian said.

One of the primary skills he teaches kids is how to be confident in a group. They learn how to stand, how to project their voices and speak well, and how to sound confident. Other core values they work on include teamwork and trust. “Every single person is important to a production,” Brian explained. “If one person isn’t there or isn’t performing to the best of their ability, the whole production suffers.”

Brian starts practice by having the kids read the script so everyone gets a feel for what the story is, who the characters are, and how they relate to each other. It is imperative that the actor understands the story as well as their role in it in order to bring that character to life and make them believable. Then, they move on to bringing all those elements together and Brian starts playing with choices. “I try to decide who is standing where, how we are getting there, and what we can do within those parameters.”

However, getting a show to a polished level comes with its fair share of challenges. Sometimes, Brian has no more than two weeks to audition kids and get the show ready to be performed. This means he must adhere to a very demanding schedule on a number of ends, from making sure actors have their lines memorized and the technique down to meeting technical deadlines in regards to sets, props, costumes, and lights. Even during these shorter programs, though, Brian works hard to ensure the end product is of admirable quality and that the experience is as valuable as possible. “I’m trying to teach skills that will stick,” he said. “The habits that we try to instill here will help them not only in the theatre, but in anything they choose to pursue. That’s my primary goal with the Young People’s Theatre program.”

Since the ACT operates on a show-by-show basis, the plans for this summer have yet to be decided. For Brian, this model is a blessing, since it allows for lots of flexibility. “If I wake up in the middle of the night with this crazy idea and think, ‘Is that something we could actually do?’ Well, we have a pretty open schedule, so let’s try it!” Although Brian typically acts on ideas as soon as he gets them, he does have a couple shows he has been sitting on for a while. One is a musical called How to Eat Like a Child: And Other Lessons in Not Being a Grownup. “It’s absolutely delightful, but I’m waiting for the right opportunity. A variety of logistic factors have to fall into place before I can pull the trigger on that one,” Brian said.

Because Brian spends so much time working with, inspiring, and entertaining kids, many people might think that it is a nonstop party at his house. However, an interesting fact that some may not know about him is that he does, in fact, occasionally value silence. “When I go home, I like to be able to turn everything off and just be quiet. I love listening to music and performing music, but believe it or not, when I’m not in the shop I like things to be quiet. Silence is golden,” he laughed.

Brian’s job title was recently changed from Education/Technical director to Associate Artistic/Managing Director to better reflect the kind of work he has been doing. Currently, he is looking forward to defining for himself what that fully entails, and can’t wait to see what the future holds. “I feel without question that I’m supposed to be here,” he said. “This is what I’m supposed to be doing. I guess this is where the good Lord wants me to be, and I’m happy to do it.” // – Becca Simon