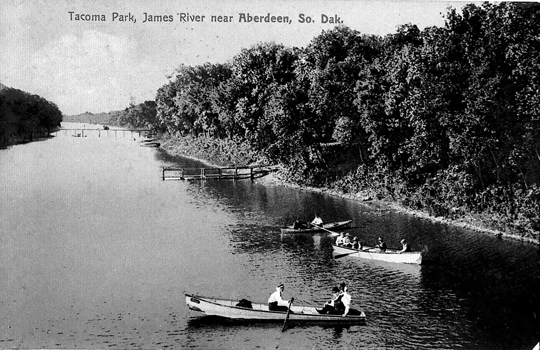 When the weather is nice and hot, it seems like all of Aberdeen heads out to the lake. Richmond and Mina Lakes are the most common nowadays, but they haven’t always been the popular spot for relief from summer afternoons. For most of the 20th century, that title went to Tacoma Park, and before that, to several unnamed, now-forgotten groves along the James River. At separate times in history, one could find indigenous people and city and country folk sitting on the river’s shaded banks, taking in its cool ambiance. The slow moving, sinuous body of water has a deep and rich history and was much more significant a landmark than many today realize.

Dubbed “unnavigable river” by Dakota tribes, called the James River by French explorers and commonly known as the Jim to modern locals, the river travels a total of 710 miles throughout North and South Dakota and essentially splits Brown County into two parts. In the early 1800s, the meeting of the Elm and the James – the present-day Columbia area – was an important crossing point for American Indians following buffalo migrations. It also provided fuel, shelter, and food, such as fish, deer and small game. The same things that drove Native Americans to these treey banks would also attract explorers and eventually, Brown County settlers. Bridging areas around the James River was very important during this time, not only for trading routes and passages, but also for social reasons. The groves around the river became important gathering points between rural, dispersed farmers and their urban dwelling counterparts.

According to James River Landscapes and Historic Sites by Dr. Art Buntin, the James was instrumental in keeping smaller towns alive by attracting townspeople from Aberdeen to move the 10 miles out to live on the river. The 1880s’ Great Dakota Boom hit our area, too, all thanks to the Jim. Tales of the timbered shores and stumpless plains of the James River Valley helped populate Aberdeen and the small towns surrounding. Later on, the banks of the river would attract people for other reasons. Pioneers flocked to the banks of the James for shade and leisure. South Dakota’s landscape looked much different back then, before settlement and shelterbelts. The trees were a welcome site in comparison to the surrounding endless prairie, and the local Brown County Sentinel reported in 1897 that “the bank of the beautiful Jim (is) one of the most pleasant spots on earth to take an outing.” Still, the sleepy James could be dangerous. Its low banks mean the river floods very easily, from too much rain or snow. Surrounding communities often flooded, too, and traveling across the river was a difficult feat throughout history. 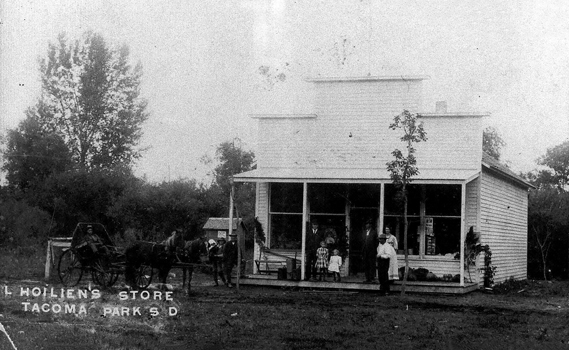 People gather outside of Holien’s Store at Tacoma Park in the year 1909.

Though groves peppered the banks of the Jim throughout the county, Tacoma Park was by far the most popular. About seven miles south of Columbia sits the former gathering site, though it looks much different today than it did a hundred years ago, when thousands came in for the infamous Park Week each year. Dilapidated and overgrown buildings are now the only indication that Tacoma Park was once was a place where people went to “dance in a cool spot near the river and among the trees.”

Tom James (no connection to the James River) was the original homesteader of the 160-acre plot that would become Tacoma Park. He eventually lost the land in foreclosure, but was allowed to continue living on it. It’s been said that James named his claim after the city in Washington. James was considered an eccentric, and after the park was established, visitors enjoyed seeing the old bachelor, with his worn clothes, long, white beard and penchant for playing the fiddle and making and giving away his ample collection of homemade wine.

While the spot at Tacoma Park was always known for its fishing, it wasn’t until the Industrial Association bought the property in 1898 that it became an entertainment hub. Beginning in 1906 with the Chautauqua years (a popular movement across rural America during the early 20th century that promoted adult education), picnics became all the rage at Tacoma Park. Organizations from surrounding towns had frequent all-day events at Tacoma Park, in the years up until 1922. Some of these included the Eagles, the Moose, the Knights of Columbus and the Farmers Bureau, among many others. Tacoma Park became a mecca for public speakers from in- and out-of-state about various important topics of the day, encompassing overseas wars, anti-imperialism, monopoly concerns, labor and agriculture issues, and suffrage and temperance. 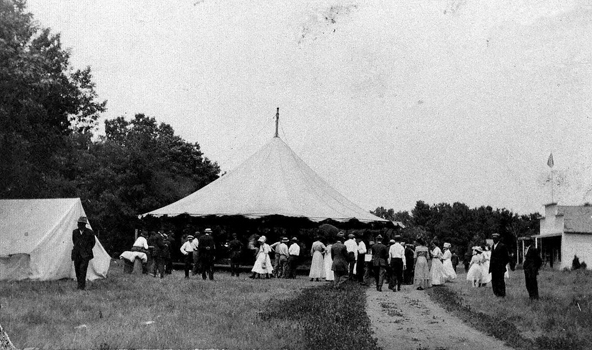 This large tent was set up at Tacoma Park, and possibly housed a carousel.

Structures at Tacoma Park over the years included a dining hall, concession stand, the hillside auditorium (where figures like Hamlin Garland and William Jennings Bryan spoke), cottages (sold mostly to well-to-do members of surrounding communities), a race track for horses and later, stock cars, a pasture area (for horses during the horse and buggy era and then as a parking lot during the early 1900s), a general store, and a baseball diamond. From 1906 to 1922, Tacoma Park Week offered marksman competitions, fireworks, high wire feats, high dive competitions, races (foot, relay and sack), balloon rides, and as always, river boating attractions. Even the weather didn’t stop people from coming out to the river – tobogganing onto the ice during sunny days and moonlit nights was popular.

Despite competition in the early 1900s from festivals in Aberdeen and Groton, varied attractions and the lure of a cool, shaded respite from the sweltering heat kept thousands rolling into Tacoma for Park Week and the annual Fourth of July celebrations. In July of 1915, an estimated 12,000 people visited Tacoma Park. Local newspapers wrote of trains full of people going to and from the park daily, carrying hundreds at a time. A round trip from Aberdeen to Tacoma on the Great Northern railroad, where it had a stop in the park, was 50 cents in 1916. In 1922, dances at Tacoma Park took off, beginning a 41-year monopoly over most all of the competing dance pavilions in the area. In 1927 alone, Tacoma held 45 dances during the summer months. Advertisements read, “Tacoma Park, where South Dakota dances” and in 2001, a woman wrote in the American News: “What I wouldn’t give for one last dance at ‘The Park,’” during what she considered “the best memories of (her) teen-aged years.” 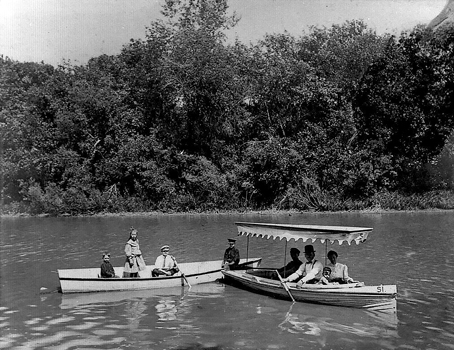 The Fred O. Korte family spends a day boating in Tacoma Park on the James River.

The dances at Tacoma Park would eventually slow down, until coming to a complete halt after 1968. A lack of funding and public interest contributed to the demise of the “once glamorous park,” that proud pioneers used “… as a showcase for man’s accomplishments.” Flooding on the James was always an issue for Tacoma Park, and with increasing competition from closer parks, such as Wylie in Aberdeen and Lyra near Frederick – it faded into memory. The Daily American printed this description about Tacoma Park in 1907: “Ideal in location, it surpasses every other spot within striking distance of Brown County. Situated on the banks of the quiet, sleepy Jim River, abounding in trees that furnish cool, refreshing shade throughout the day, a few minutes ride of Aberdeen, it offers irresistible temptations to the man who wishes to escape the heat of the city and the worry of business.” Though the park has not been used by the public in years, the spirit of what once was can still be felt and appreciated today with one look at the banks of the James. Though its park days at Tacoma are over, the river is as alive today as it was in the 19th century. Still important to Aberdeen and smaller communities around it, the Jim is full of wildlife. It’s not uncommon to see people from Aberdeen fishing off of various James River bridges on summer weekends. Bird watching is also popular on the peaceful water, as is kayaking and canoeing, as was the case when the very first Native Americans found the river all that time ago. // – Erin Ballard