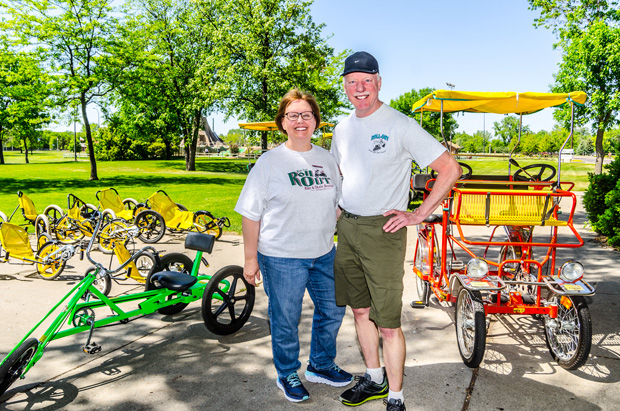 Roll Out Bicycle and Skate Rental

With summer in full swing, locals and visitors alike are heading out to explore the bike paths at Wylie Park. Along with traditional bikes, Roll Out Bicycle and Skate Rental also provides some unique options to use while cruising the trails.

“A lot of people have bicycles, but they don’t have these funky bicycles like we have,” says owner John Kersten. “We have bikes people don’t have in their own garage.”

It’s true that it isn’t every day you can gather a group of your friends or family and ride a six-person surrey bike together. To be sure, there might be more laughing than pedaling going on as you attempt this maneuver, but that’s what summer memories are all about. “The whole family can argue about who’s not pedaling,” John joked. 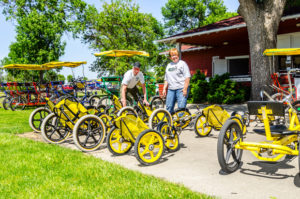 Three-wheeled fun cycles are some of the most popular rentals at Roll Out.

If a group bike effort isn’t possible, you can always try one of their easy to ride three-wheeled chopper bikes or pedal operated go-karts. Those wanting a bit more of a challenge can climb into the swivel seat of a three-wheeled fun cycle that requires you to balance and steer with your body instead of using regular handle bars. John emphasized that they are a family rental and have bikes in all shapes and sizes, “Everyone from young kids to adults can find something to ride.”

The idea to start his own skate and bike rental shop came to John while on a trip to visit his sister in Boise, Idaho. He noticed that the city had a skate rental business located along their bike trails and decided to bring that concept to Aberdeen. His first shop opened over 20 years ago and was located near the former Southside swimming pool. That first location mainly rented and sold in-line skates along with a few bikes. At that time, the city had just built a bike trail along Moccasin Creek and in-line skates were the most popular way to get around. As Wylie Park became more developed, the business moved out there and started to get more bikes on hand as people began to use them more often in place of skates. 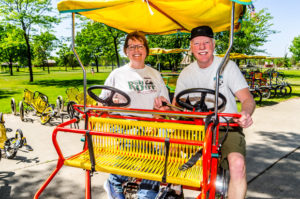 John and Sandy Wien Kersten pose amongst the wide selection of bikes they offer at Roll Out Bicycle and Skate Rental.

During their second year at Wylie, a customer asked John if he had any three-wheeled banana bikes for rent. “I had never heard of them,” he says. The customer told him more about these bikes, called fun cycles, which she had used at a KOA camp in the Black Hills. Kersten called the KOA and found out more information about the bikes and decided to purchase some of his own to rent out. People immediately loved using them and he has kept gathering more varieties of unusual bikes for his customers ever since.

Kersten is also a lifelong bicyclist himself. Each summer, he participates in weeklong distance bike riding events that cross entire states. He has biked across Iowa for 28 years in a row and plans on completing that 550-mile ride again this year, as well as biking in another event that will take him through Missouri. When he isn’t biking or managing Roll Out, he is also a full-time house painter and a ballroom and swing dance instructor for Aberdeen Parks and Rec. His wife, Sandy Weins-Kersten, helps to run Roll Out during the busy summer months along with three seasonal employees.

He says a favorite part of working in Aberdeen is the people. “Our customers are on vacation and a lot of fun. Everybody is always really nice.” // –Jenny Roth

Roll Out Bicycle and Skate Rental at Wylie Park is open every day from noon until dark through Labor Day weekend, weather permitting. Bikes are rented by the half hour or hour on a first come, first served basis.