People
A Legacy of Smiles
By Becca Simon | September/October 2017 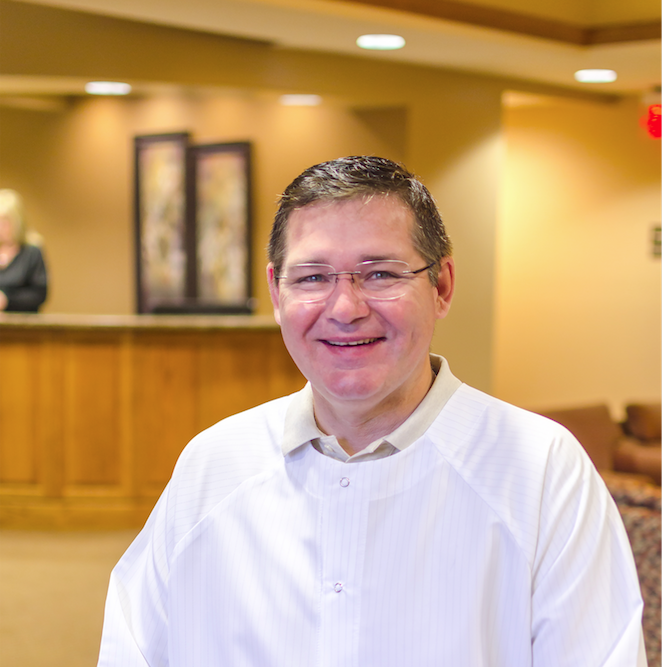 If you ask David Merxbauer what his secret to success is in the medical field, he’ll answer with one word: care. For over a decade, the Aberdeen Dental Center has been providing top-notch care from a highly skilled team and prioritizing the needs of patients above all else. “I’ve found that people don’t care how much you know until they know how much you care,” David said. “They know that I care about them as a person, not just about fixing their teeth.”

David attended the University of South Dakota already knowing he wanted to pursue a career in the medical field. While studying in the medical school library, he would often overhear students talking about what their life was going to be like as a physician. He thought to himself, “Well, I like to work with my hands, and I like to build and fix things. That opened my mind to what other things in the medical field gave me that opportunity.”

David found that the dental field perfectly fit his niche. He was able to work with his hands, be technically savvy, and most importantly, still have time for his family. “I’m not working on call, and there aren’t that many dental emergencies that can’t be taken care of during the week.”

After USD, David attended the University of Nebraska before moving back to practice in Sioux Falls, after which he practiced in Sisseton for nine years. In 2006, he returned to Aberdeen after not having lived here since grade school, and opened his own practice. He started in the strip mall just west of Shopko before quickly outgrowing that space. “We hit Aberdeen right at its growth spurt,” he explained. After that, he moved his practice across the street into what used to be a farm service building. From there, they took it down to bare walls and rebuilt it from the ground up. “We’re still in a growing phase. We have been blessed by Aberdeen and find it a great place to raise our kids.”

According to David, small communities like Aberdeen are the backbone of society. In addition to raising his kids in Aberdeen, three of them have moved back here, and two of them joined the practice. “They all went into careers that are pillars of the community. I think Aberdeen has so many opportunities, and it keeps a steady growth.”

Since they opened 11 years ago, the Aberdeen Dental Center has continued to grow at a rapid rate. At times, this proved to be a challenge. “We came and met a niche, we grew very quickly, and I went from a few operatories to many. We kept growing and adding team members, which have been my greatest asset,” David said. “I’ve been blessed to have some team members for close to a decade. We get good people and we keep them.”

One of David’s favorite aspects of dentistry is the fact that things are constantly changing. Being in the dental field means always being on the cusp of new technology. He’s gone from using air driven to electric handpieces, crowns that no longer contain metal, and even fillings that cause your teeth to be less sensitive than in the past. Recently, he attended a seminar where he looked at a new laser and three dimensional X-rays, which is one of his first goals of newer technology to acquire. “There’s so much that has changed in the 25 years I’ve been doing it – it’s fabulous and fun,” David said. However, he tries to avoid buying the first thing that comes out. “I like to make sure it’s a technology that’s tried and true tested.”

At the end of the day, it’s the care he’s able to provide to patients that makes his job worthwhile. When he treats them, he always makes sure to offer three or more options for every procedure. “If you come in and have a broken tooth, depending on how it’s broken, we may be able to do a root canal, a crown, put a filling in, or take the tooth out,” David explained. “Every patient has a different goal or focus. I try to give them many options so they can choose.”

Regardless of profession, David believes that everyone will have a rewarding life if they choose to put the care of others above all else. “If you care about the patient first and foremost, everything else kind of takes care of itself.”

David believes that his practice is in it for the long haul. “We’ve put down roots that make it very stable. I won’t live forever, but I’ve got a continuity plan going – we’re going to be here for a very long time. We’ve got roots in Aberdeen and we’re staying here. Hopefully we’re able to give back to the community as much as it has blessed us.” // by Becca Simon