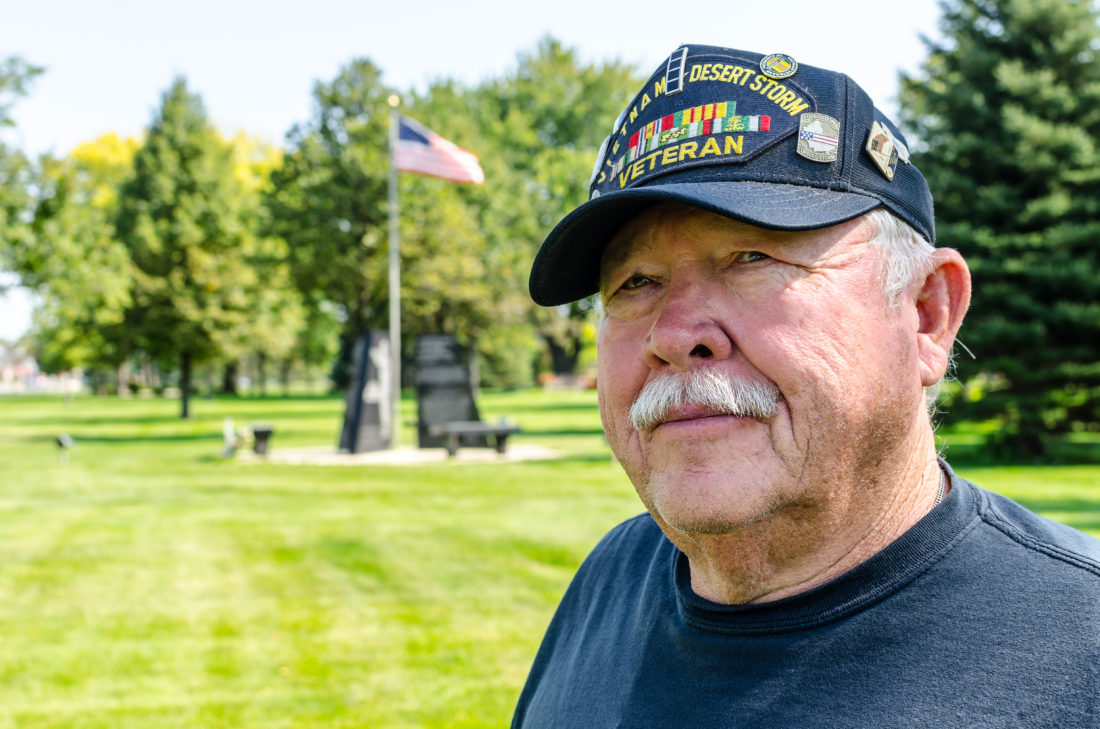 Veterans Day, which was first named Armistice Day, has been celebrated on November 11 in the U.S. since the end of World War I. Every year on the 11th hour of the 11th day of the 11th month, people all over the country observe two minutes of silence to honor all the men and women who have served in the military during times of both war and peace.

In 2015, the U.S. Census Bureau estimated that there were about 18 million U.S. veterans. While this number is huge, each individual story is important and has made a difference in shaping the world. Two of our very own Aberdeen veterans, Freddie Robinson and Erling Podoll, generously sat down with us and shared some firsthand experiences from their years of service.

A lifetime of helping others at home and abroad 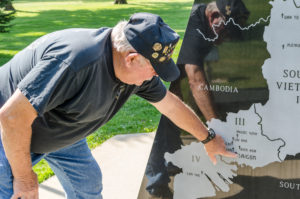 Former Aberdeen Police Chief Freddie Robinson points to the regions of Vietnam that he visited during the Vietnam War. Freddie retired from the military as a chief warrant officer 4 after 32 years of service in the Army and Army Reserve.

Freddie Robinson first joined the Army for a six year commitment in 1963. He was 17 and had just graduated from Warner High School. “I really didn’t know what I wanted to do then, and I’d always had an interest in the military, so that’s the way I went.”

After being stationed in Germany for two years, he applied for a transfer to Vietnam. When that went through, he had a 30 day delay stateside, during which he got engaged to his wife, Sandra. The year he returned from Vietnam was filled with more memorable life events. “I got home from Vietnam in July of 1966, got married, and then on January 1, 1967, I started working for the Aberdeen Police Department.”

While working night shifts at the police department, Freddie served for two years with the South Dakota National Guard in the early 1970s. Later on he heard that the Aberdeen Army Reserve 452nd Ordnance Company was going to Germany for their two week training. “I thought well, I spent two years in Germany, if I join these guys for a year I can go back to Germany and travel and see all the places I used to go to. So I joined the Army Reserve, but they didn’t go to Germany for the training, they instead went to Hunstville, Alabama!” he laughs. “But they said for sure they would be going to Germany the next year, so I extended for three years and they did go to Germany, and so did I. That extending went on and ended up being a 24 year career in the Army Reserve.”

During his time with the Army Reserve, Freddie traveled overseas for Operations Desert Shield and Desert Storm. He remembers one of the most challenging parts of being in Desert Shield was the homesickness. “We didn’t have a lot of communication with home. Our unit moved around a lot and was split up into different groups several times. There were instances when we were almost a hundred miles away from the nearest telephone that we could use to call home.”

In 1979 his unit went to Bosnia, and Freddie says he was proud to go there with his son, William ‘Skip’ Robinson, who was also a member of the 452nd at the time. While they were away, Sandra was back in Aberdeen working to assist local military families. “My wife was the family support group leader for Aberdeen and also on the national board for family support.”

Freddie retired from the military as a chief warrant officer 4 and from the Aberdeen Police Department as a captain. He served for about 32 years in both fields. Afterwards, he worked as the county emergency manager for six years, and nowadays you can find him volunteering throughout the community. One of the things he enjoyed the most about his time in the service was the ability it gave him to travel and see different parts of the world. He emphasized the significant duties that members of the Army Reserve and National Guard, or the “guys and gals in green” as he says, fulfill when they are activated and jump in to help people during all kinds of situations from national crises to natural disasters.

They saved the world one beach at a time 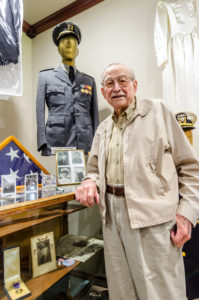 Erling Podoll served as an officer in the Navy and was stationed in the Northern Mariana Islands during World War II.

When Erling Podoll decided to enlist in the Navy in 1942 to help pay for college, he said he literally walked off his family’s farm near Westport. “I was 17 and I walked off during threshing time. I don’t know how I had the guts to do it. I had a superintendent my senior year of high school who told me that I should go on with my schooling, and I had never really thought of that. Apparently that gave me the audacity to walk off the job, as you might say.”

After completing first the V-12 Navy College Officer Training Program in North Dakota, and then Midshipmen’s School in Illinois, he received his commission in November of 1944 and was assigned as the officer in charge of Landing Craft Tank (LCT) 354, Group 39. His LCT was stationed in Tinian, one of the Northern Mariana Islands. During this time in World War II, Tinian housed the biggest B-29 bomber plane base in the world and was the location where the main bombing of Japan came from. LCT vessels like his were about 120 feet long by about 32 feet wide and used for transporting all the goods that moved between the big cargo ships and Tinian. According to Erling, “Most of the bombs and equipment on the island had been hauled ship-to-shore by Group 39 LCTs.”

Erling and his crew of 12 men did everything in the stern compartment of the LCT. “We ate, slept, and did everything in an area that was about 20 by 30 feet. On one side we had a counter with a half dozen stools so a few people could eat at a time, a stove, and fridge. And on the other side were all the bunks.” He says he never once got seasick while traveling across or living on the ocean.

In July of 1945, heavy cruiser U.S.S. Indianapolis anchored near Tinian. Another boat, LCT 991, got the call to go haul cargo from the Indianapolis to shore. Erling said he went along with LCT 991 because his good friend and former roommate from V-12 officers training, Telford Morgan of Warner, was onboard the Indianapolis and he wanted to visit with him. LCT 991 made two trips from the Indianapolis to Tinian, one hauling a container of Uranium 235, and the other a crate with atomic bomb components. Four days later, Telford lost his life when the Indianapolis was sunk near the Philippines. After the war ended, Erling’s LCT 354 was assigned the job of hauling three truckloads of unused atomic bomb casings out to be disposed of in the sea.

Erling was separated from active duty in July of 1946 and remained in the inactive reserves until his final honorable discharge in 1959. He went on to attend South Dakota State University and work as a wildlife biologist for over 30 years, as well as raise a family with his wife, Connie. He says when the Indianapolis sank, its log was lost and the logs from the LCTs were also not found. The Nuclear Defense Agency and Navy did not have any official record of how the atomic bomb supplies reached the shores of Tinian. In 1993 Erling started the process of gathering accounts from other LCT members he knew, as well as writing his own account of what happened. In 2009, after 16 years, the Navy finally accepted their statements and officially recognized the role those LCTs played in that part of history.

At his home in Aberdeen, Erling has a sewn patch with the quote, ‘They saved the world, one beach at a time.’ “That is what we’re most proud of,” he says. // –Jenny Roth