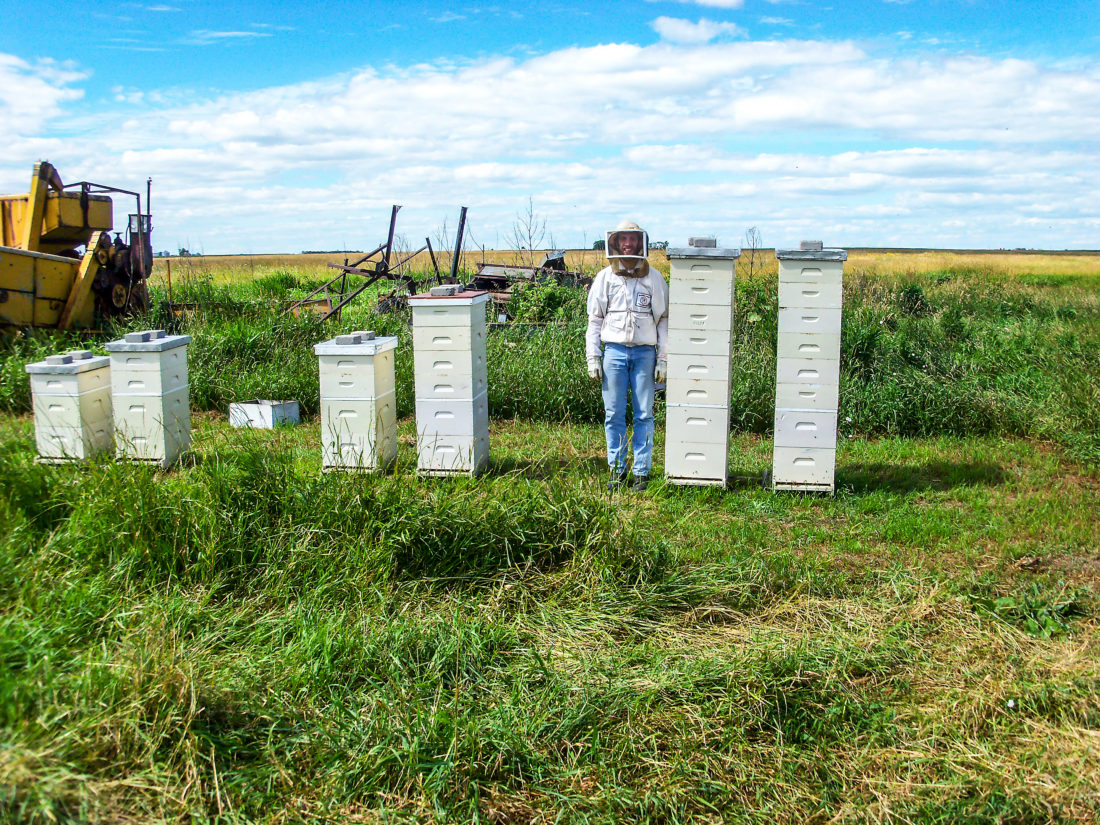 Wandry’s Apiary, run by father and son Gerald and Greg Wandry, has been filling the shelves of Aberdeen stores with locally produced honey for about a decade. You’ve probably seen their familiar bear-shaped containers in places like Natural Abundance, Ken’s, Runnings, and Kessler’s, but they don’t stop at Aberdeen when it comes to supplying honey. They also ship their product to other Runnings locations in South Dakota, North Dakota, Minnesota, and Montana, all the Ken’s stores statewide, and the Economy Meat Market in Bath, South Dakota. In addition to honey that comes in three different sized containers, they also sell raw honey and beeswax. If all of that sounds like a big operation, you’d be surprised to learn that Gerald, Greg, and Betty, Gerald’s wife, do every part of the business from start to finish by themselves. “We do everything from stage one to store on our own,” says Betty.

The process starts in the spring, when they buy bees to add to the ones they kept through the winter. “We either order the bees through the mail or we travel to pick them up. That can be quite a trip, with all the special licenses you need to take bees across state lines and things like that,” Betty says. They also feed the bees during this time of year, until their nectar-flow starts. In the summer, things really get busy when they have to add honey boxes as the bees fill them with honey, pull those boxes and take them to the extracting building, uncap frames and spin honey out in the extractor, run the honey through a strainer cloth, and then pour it into either five gallon pails or 55 gallon barrels. In the fall and winter, they feed the hives again and also do other things like winterizing and medicating.

Along with all the beekeeping, the Wandrys also do their own packaging, labeling, and delivering of the final product. Betty explains, “Our hives are in different pastures that are all within about 20 miles from Aberdeen. Then we have a building just for storage, equipment, and extracting. In our house we have a separate room that serves as our area for bottling honey, boxing orders, and keeping our inventory. All of our equipment is food grade. We’re inspected by the state and always keep everything top notch.”

Betty also says that their honey’s popularity is due in part to the kinds of flowers their bees use to make it. “The kind of flower determines the color and flavor of the honey. Our bees use mostly alfalfa and clover flowers, which give it a milder taste and lighter color.”

The Wandrys got into the business of keeping bees in 2007 with the encouragement of Gerald’s uncle, longtime beekeeper and Aberdeen resident, Walter Schott. Walter had talked to them about the opportunity several years before they decided to start, but at first they didn’t have much interest in it since they all were busy working at other jobs. Then Gerald and Greg decided to get a few hives, learn what they could, and see how it would go. Walter had gotten them into selling honey at Natural Abundance already, but then they were approached by Runnings and asked if they were interested in selling their honey there, too. Betty says, “We thought more about it for about a year and then decided to give it a try, and it took off from there.”

Keeping things in the family, Gerald and Betty make time to share what they’ve learned about beekeeping with their daughter and grandchildren, who also live in Aberdeen. “Sometimes we have them come out and we’ll let them wear the extra bee suit. We’re trying to teach them a little bit about what we do and to not be afraid of the bees,” Betty says. // –Jenny Roth