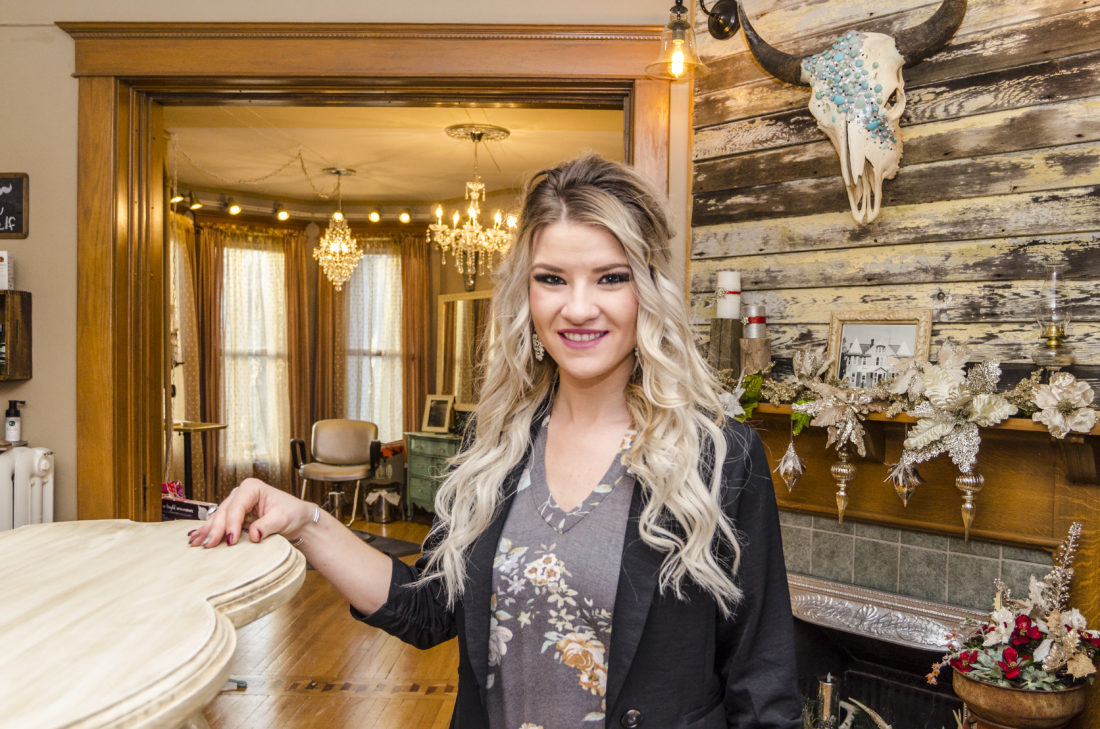 Historic homes grab our attention not only because of their amazing architecture, but also because they draw us a bit closer to our city’s past. They’re filled with stories about the many inhabitants who’ve passed through their doorways over the years and all the eras that have come and gone. But there is nothing an old house loves more than being lived in, and while it’s fascinating to learn about the rich history of a structure, it’s equally remarkable to see a building that is over one hundred years old still playing an active role in the community today.

Melynda Sletten decided to fill one of these historic houses with life and activity when she chose it as the setting for her full service salon, Platinum Salon and Spa. Located in an old Victorian at 714 South Main Street, the salon has been open for two years and specializes in cuts, colors, easihair extensions, and Brazilian Blowouts. Melynda’s elegant and rustic style compliments the vintage features of the house perfectly, resulting in a comfortable retreat for her clients to relax in. “The character of the building is definitely something I wanted to have because it gives the salon a really home-like feeling,” she explains. Warm lighting, a farmhouse color scheme, and the refurbished furniture she selected for her décor all make for a welcoming atmosphere. In the center of everything stands an original fireplace with a mantel made out of weathered siding from her grandmother’s house. To add even more of a personal touch, black and white photographs of her grandparents on their wedding day also hang on the walls throughout the space.

After working as a cosmetologist for a number of years, Melynda says what inspired her to start her own business was the desire to be more independent. “I knew cosmetology was what I wanted to do because it allows me to help people feel confident and beautiful. With having my own business, I get the freedom to create my own unique styles. It’s the best thing I’ve done.” Even though she lives outside of town, she picked Aberdeen to launch her venture because of its central location to all the surrounding areas. She says it took a few months to get her building fixed up and ready for opening.

Melynda’s salon is on the home’s first floor along with another small business, Tara-dipity Massage, while apartments make up the rest of the square footage. The apartments were a renovation that started in the 1960s by Joe Geier, one of the home’s previous owners. Joe ran a barbershop from the same space Melynda is using for her salon and spa. His wife Gloria also operated a doll repair shop in the building at the same time. According to an interview with his daughter, Kris Rehfeld, in the Aberdeen American News, when Joe purchased the home it was fairly rundown and he spent many evenings repairing it over a 30 year time period.

Joe is in his nineties and just recently moved from Aberdeen to Minnesota. It seems fitting that the house he remodeled for his barbershop continues serving people in the community in a similar way through Melynda’s salon. Even though he retired over 20 years ago, Joe came to Platinum Salon and Spa’s grand opening to show his support, a gesture that demonstrates just how much a bright future means to every great history. // –Jenny Roth