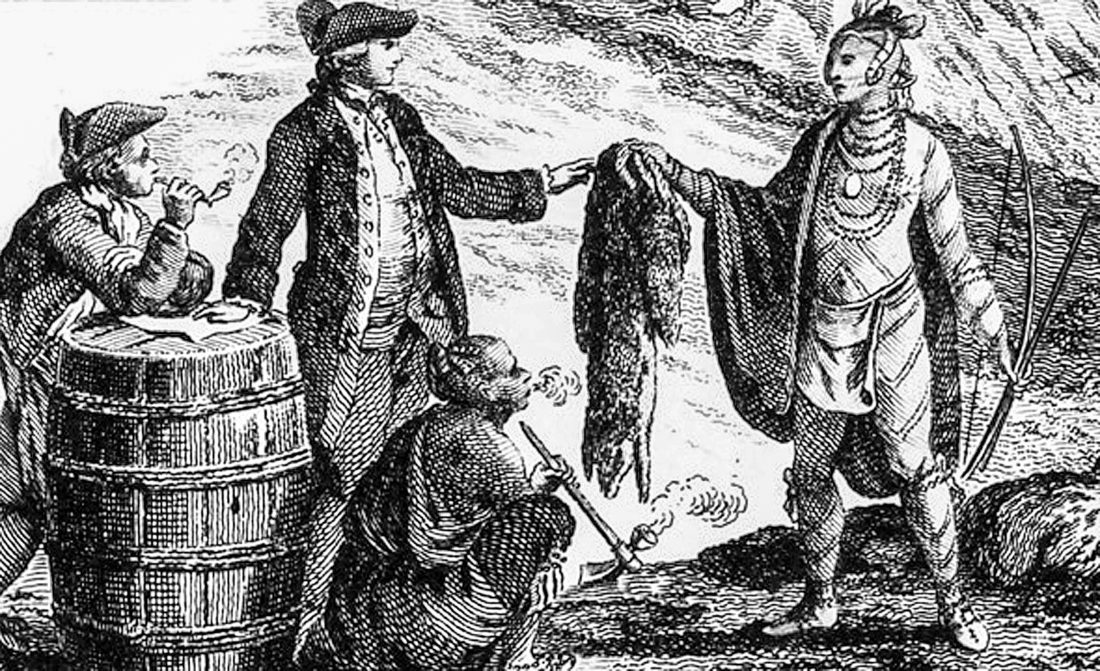 In our previous two issues we heard about the lives of Waneta and Drifting Goose, two prominent Sioux Chiefs who lived near Aberdeen in the James River Valley. In this issue, we’ll look at more historical figures and events of the 19th century that have contributed to our rich history.

In 1764, Pierre Lacléde and Auguste Chouteau founded the city of St. Louis. At this time, most everything west of the Mississippi was French territory, with lands to the north (now Canada) in British control. The British kept creeping south into French territory. To gain a foothold on the French lands, Chouteau started the St. Louis Fur Company and hired trappers to move north up the Missouri River. Trappers were after beaver, mink, muskrat, and weasel pelts while also trading for buffalo hides with area tribes.

In 1803, all this territory was purchased from France in what is known as the Louisiana Purchase. One such trapper at this time was Toussaint Charbonneau, who along with his Shoshone wife, Sacagawea, led the Lewis and Clark expedition in exploring the Northwest Territory from 1804 to 1806. Around 1810, all French fur companies were banned from operating in the new American lands. It was at this time that many of the French trappers joined American fur companies. They were welcomed additions, for they knew the land and native peoples quite well. Most fur companies focused on the Missouri River Basin. However, some did operate for short periods of time along the James River. The presence of Waneta and Drifting Goose’s people, who kept a tight grip on the area, was a deterrent to the fur companies’ operations.

William Dickson was reportedly a cousin of Chief Waneta, and well-known in the trade business. In 1822, a group of his father’s friends created the Columbia Fur Company to directly compete with the American Fur Company and the Hudson Bay Company. That same year, Colin Campbell of Hudson Bay Company established a post southwest of present day Frederick on the Elm River. Also in 1822, Dickson set up a post just south of Campbell’s on the Elm.

Some records show that beginning in 1824, Dickson also managed Campbell’s trading post. He operated both posts until 1827, when the Columbia Fur Company was bought out by the American Fur Company. (The American Fur Company was founded by John Astor in 1808, and was the most successful of all fur companies lasting until 1842, when wearing furs went out of style and the European fur trade crashed, but that’s another story.)

The American Fur Company then moved to a site south of Tacoma Park on the James to a spot later known as Rondell. William led this camp until 1835. His time spent at this new site was quite a lonely experience, which led to an ever increasing drinking problem. Finally, after several problems with record keeping and deliveries of both goods and services to the company and customers, the main office in St. Louis removed him and placed him at a trading post near modern day Vermillion. He lived out his days there, with the exception of two important events in 1838 and 1839.

When Fort Snelling was established in 1819 in Minnesota Territory at present day Minneapolis-St. Paul, a 13-year-old drummer boy named Joseph Brown was stationed there. He no doubt witnessed the events that occurred in 1820, when Chief Waneta arrived at the fort and was treated very harshly. For the most part, Fort Snelling served as a trading and commerce center for both traders and native peoples. Various native groups would camp near the fort, and everybody there interacted peacefully with each other.

From the day he arrived at the fort, Joseph learned as much as he could in regards to fort operations, military protocol, diplomacy skills, and the trade business. By 1825, at the age of 19, everybody called him “Major” Brown. During this same year, he decided it was time to leave the military and pursue private endeavors. He signed on with the American Fur Company and established his own trading post outside the fort.

Joseph stayed near the fort for a few more years, then moved his post to the Big Stone area. In 1835, he decided to set up a post on the James River south of Tacoma Park on the same site that William Dickson had operated his post on from 1827 to 1835. He named it the Oakwood Post, built a building there, and hired a man by the name of Pierre LeBlanc to operate it. That same year, Joseph married a woman of Dakota and French descent. Come winter of that year, Pierre left and stayed at the post at Big Stone.

In the spring of 1836, Pierre returned to Oakwood Post to find a burned-out building. There’s no proof of who did it, but odds are it could’ve been Drifting Goose. Joseph and Pierre then rebuilt the post at a site a mile to the south of the first one, and continued business. Pierre decided to stay the winter there, and during that time he quarreled with a native and refused him food. A short time later, Pierre was found dead along his trap line.

With the death of Pierre, the Oakwood Post was abandoned. Joseph Brown and his wife moved to Minnesota Territory. In 1840, he platted a town he named Dakota, which is now known as Stillwater. In 1851, he was appointed as an Indian agent in Minnesota. He and his wife had a son named Samuel J. Brown, who would also impact the James River Region in later years.

Nicollet was a French geographer and scientist, and Freemont was a young officer who was hand-picked by Joel Poinsett, Secretary of the War Department, who had hired them to survey the lands between the Missouri and Mississippi Rivers. In 1838, they surveyed western Minnesota Territory.

In 1839, their James River journey began. They went up the Missouri River to Fort Pierre. With Nicollet and Freeman were 17 other individuals, the most notable being William Dickson, the well-known “Mountain Man” Etienne Provost, and Charles Geyer, a German botanist. On July 1, 1839, the party of 19 left Fort Pierre heading west with 33 horses and 10 horse-drawn carts. Because of possible dangers, Nicollet had arranged for a party of men to leave the Lac-qui-Parle Post in Minnesota and meet his party at the Oakwood Post site between July 9 and 12. The meeting place was chosen because of Dickson’s knowledge of the area.

Nicollet reached the old Oakwood Post on July 10 to find no other group there. They camped and waited for the party to arrive from Lac-qui-Parle. The party never showed up, so on the morning of July 14 they proceeded north on the west side of the James River (through present day Tacoma Park) and up to the spot where the Elm and James merge just south of Columbia. They camped there overnight, and on July 15 continued north into present day North Dakota.

The party left the James River near Bone Hill, which is just north of present day LaMoure, and cut east across the prairie toward Devils Lake, where they met Chief Waneta along the way. From Devils Lake, the party headed southeast to the Coteau des Prairies (Sisseton area), on to Big Stone Lake, and finally down to John Renville’s post on Lac-qui-Parle. The Nicollet Tower, currently just west of the city of Sisseton and overlooking the valley to the east, is named after this expedition.

Sam, as he was known, was the son of trading post operator Joseph Brown. He was employed as an army scout in 1866 at Fort Wadsworth (now known as Fort Sisseton). His father was also there at that time, and was in charge of all civilian employees at the fort. The open hostilities of the 1862 Dakota War had been over for four years, but tensions were still in the air. In March of 1866, Sam’s father was sent on a special mission to Fort Rice, but before leaving made his son, Sam, the chief of scouts at the fort.

On April 19, an Indian runner came to the fort and reported that fresh Indian tracks were seen along the James River where Jamestown is now located. It was Sam’s responsibility to alert the other posts of possible attacks. Sam sent a note to Fort Abercrombie on the Red River alerting them of possible danger. He then set out on horseback to alert the Indian scout camp on the Elm River, northeast of Aberdeen, about a surprise attack. When he arrived at the camp, the head scout, Joseph Rouilliard, told Sam that the fresh tracks were made by messengers that had been sent out by his father, Joseph Brown, to call all eastern chiefs to a peace council at Fort Rice.

It was then Sam realized that the message he had sent to Fort Abercrombie needed to be corrected to prevent any unwarranted military action that could incite hostilities again. At that time, in the middle of the night, Sam knew he had to ride immediately back to Fort Wadsworth to correct his previous message. Rouilliard gave Sam a fresh horse, and he proceeded to trace his path back to the fort. Since he had arrived in the cover of the James River Valley, a storm had been building, and as he left he was met with strong winds, rain turning to sleet, hail, and then snow. But he knew he had to continue to prevent potential conflicts.

In the darkness, he thought he could maintain his course to the fort by keeping the wind, which was blowing in a slight northeast direction, at his back. However, the wind shifted as he rode, and at sunrise he found himself about 15 miles off course. The snow was slowing down, but the temperature was dropping. His legs, hands, and face were becoming numb. Most anyone would have stopped to find shelter, build a fire, and rest his horse. Not Sam. He pushed on to correct the previous message he had sent.

On April 20, 1866, Sam reached Fort Wadsworth at about 8:00 AM. Upon reaching the fort, he took care of his horse and collapsed in his cabin. In mid-afternoon, he reported that his previous message to Fort Abercrombie was wrong, and immediately a messenger was sent to counteract it.

Sam ended up losing the use of his legs as a result of that ride and spent the rest of his life in a wheelchair, as well as suffering other physical disabilities. He lived to the age of 80 years old, and was a respected resident of Browns Valley, Minnesota for many years. //–Mike McCafferty