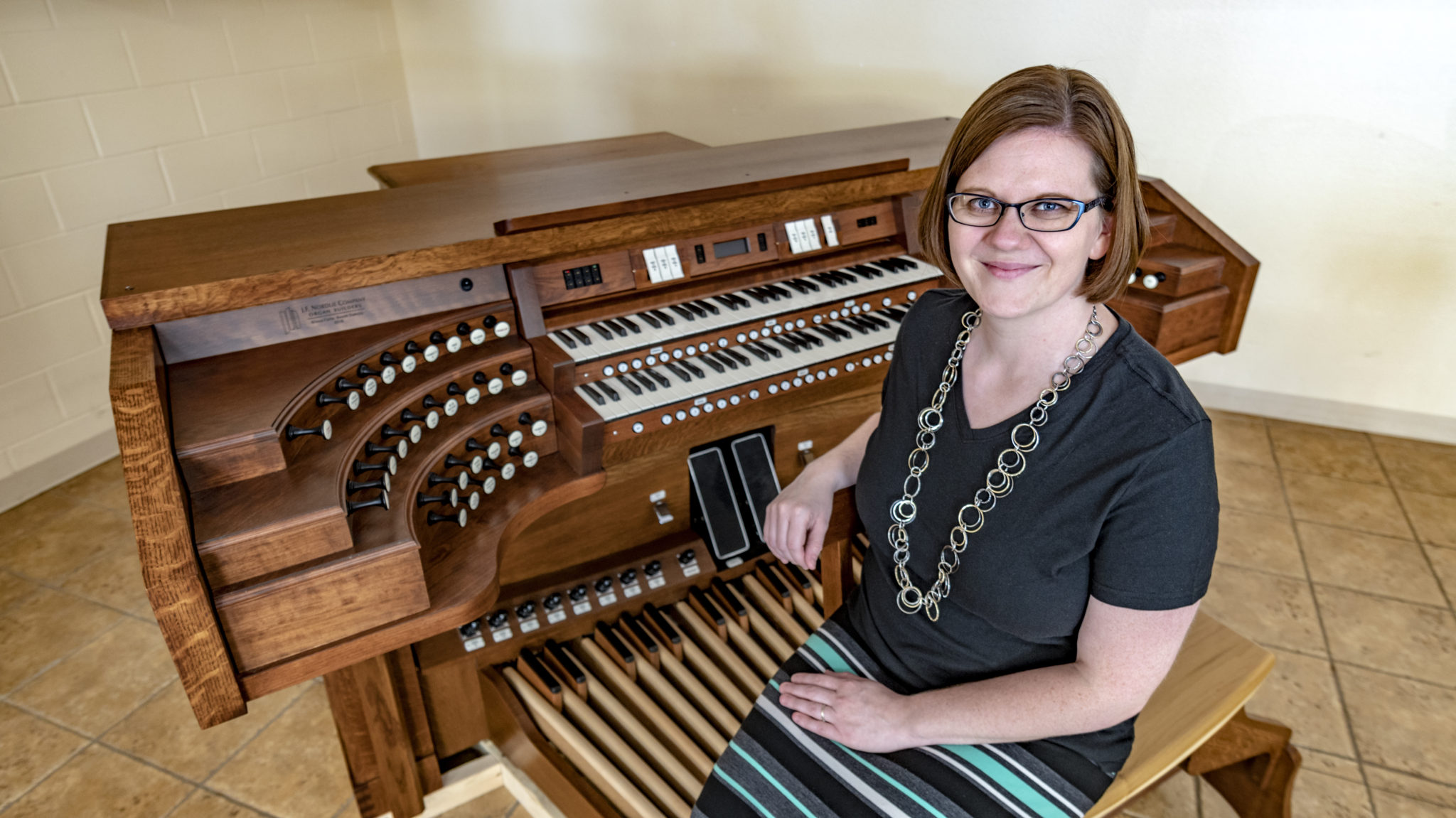 When organ builder John Nordlie first saw the pipe organ at Sacred Heart Church in Aberdeen as a college intern in the early 1970s, his mentor told him its days were numbered. Nearly half a century later, John is taking care of it.

When they built the current Sacred Heart Church in 1933, parishioners saved some money by reusing the old church’s 1908 pipe organ. In 1954, they replaced that instrument with an organ that had 1,241 pipes. Any machine with thousands of parts needs attention, however, and maintenance became an issue after the parish, for whatever reason (but not a very far-sighted one), raised the choir loft floor, building it around the organ console and sealing off parts that needed servicing. Not surprisingly, this created problems. As Sacred Heart Pastor Father Mark Lichter summarizes, “Over time, the old organ slowly broke down.”

“Many pipes were unplayable,” expands Dr. Richard Fitzgerald, Sacred Heart’s organist in 2014-2015, and now director of music and organist at St. Joseph Cathedral in Columbus, Ohio. “When a note or a pipe would not play, I had to finagle another pitch to play in its absence.” In addition, “The organ did not make use of the space provided for it by church architects. The result was an organ that was much too small for the building it was intended to fill with sound.” Carissa Baustian, the current organist, noted that the organ was installed in the corner of the choir loft, which, she says, “caused the choir to look toward the organ, so their sound didn’t project into the church.”

Clearly, the organ was in desperate shape, but the solution wasn’t an easy call. Repair wasn’t an option, but what should replace it? A new pipe organ or a different keyboard instrument? The cost difference was enormous, but so was the difference in sound quality. According to Father Lichter, “Parishioners have wanted to do something about the organ since at least the 1980s,” and the parish confronted that question in earnest again beginning in 2014, finally deciding in 2017 on a new organ. The cost, including the organ and renovations in the choir loft (e.g., lowering the floor), is about $700,000, surely one of the most expensive musical projects undertaken in Aberdeen, particularly for one instrument.

“We decided we had to replace what we had,” says Father Lichter. “The organ is part of the beauty of the place, and the building deserves to have what it had, as do the people. The generation that built the church did that for today’s parishioners, and we have an obligation to future generations.” After all, he explains, “If one of the great stained glass windows broke, we wouldn’t just replace it with a clear window.” Further, he noted the pipe organ’s long history in Christian worship. So they turned to John Nordlie.

“Fascinated by making things,” John became interested in pipe organs as a child, from a manufacturing, not a musical, perspective. In fact, he doesn’t play the pipe organ. At Augustana in the early 1970s, he met up with Eugene Doutt, an organ specialist from Watertown, and interned with him in Aberdeen at the old Bethlehem Lutheran Church, when he also visited Sacred Heart. After college, John joined Noack Organ Company in Massachusetts. After about two years, while delivering an organ to Minnesota, he received a call from an area pastor and ended up giving him a quote to build an organ. He set up shop at his parents’ house in Sioux Falls in 1976, and the rest is history. Since then, JF Nordlie Company has custom-built more than 50 organs, mostly across the Midwest, but some as far away as Japan, and serviced many more. It’s a combination of art and craft, science and passion, and John says he’s “been blessed to get to do what he wanted to do.”

As some experts put it, a pipe organ is basically a big box of whistles (pipes), each of which is designed to produce a specific musical note with a particular tonal quality, such as to mimic another instrument. The organ has a constant supply of air to blow those whistles, and the organist controls where this wind goes by pulling out stops, selecting which sets of pipes receive the wind (the more stops, the more sound; hence “pulling out all the stops”= volume), and by depressing keys and pedals, which produce individual notes. With enough pipes and controls, a pipe organ might make the sounds of dozens of instruments and sound like an orchestra. No wonder Mozart called it the “King of the Instruments.”

Today, in what looks like a classic woodworking shop but with bells, whistles, and microchips, John Nordlie designs and builds organs with all the high-tech options available to him, including computer-aided design, computer numerical control, fiber optics, infrared, and solid state technologies. For Sacred Heart, he created a high-precision electric action pipe organ in the American Classic style, which allows it to play all types of organ music.

The console, which is made of quarter-sawn white oak, contains two keyboards in a cherry surround, plus the pedals (which constitute a third keyboard). It is situated front and center in the choir loft, but facing the back, so the choir’s voices project forward, not at an angle. Carissa Baustian uses a rear-view mirror to keep an eye on the celebrant. The new organ has 1,888 pipes, including about 850 that John’s crew salvaged and refurbished from the 1954 organ. The new pipes, which range from 16 feet tall down to a few inches, were made in Hermosa, South Dakota, Ohio, and the Netherlands, as well as in John’s shop. More than half of the pipes, including the beautiful wooden pipes, will be invisible, hidden in the chambers on either side of the choir loft. Four arrangements totaling more than 900 stunning gold and silver metal pipes flank the loft. The organ includes 22 registers, or distinct tonal sounds-sometimes called voices. Two electric blowers can breathe 5,000 cubic feet of air per minute into the organ (the average person would take five days to breathe that much air). It definitely will fill the building with sound.

So, now Sacred Heart will be all pipe organ all the time, right? Not exactly, Father Lichter says. “The organ is one of the ways of worshiping, not the only way. For some the organ is very important to worship, but people have all kinds of opinions. We will have a variety of music here.”

Still, the organ is designed to fill the big church with sound and music, so don’t be surprised if sometimes they pull out all the stops. // – Patrick Gallagher