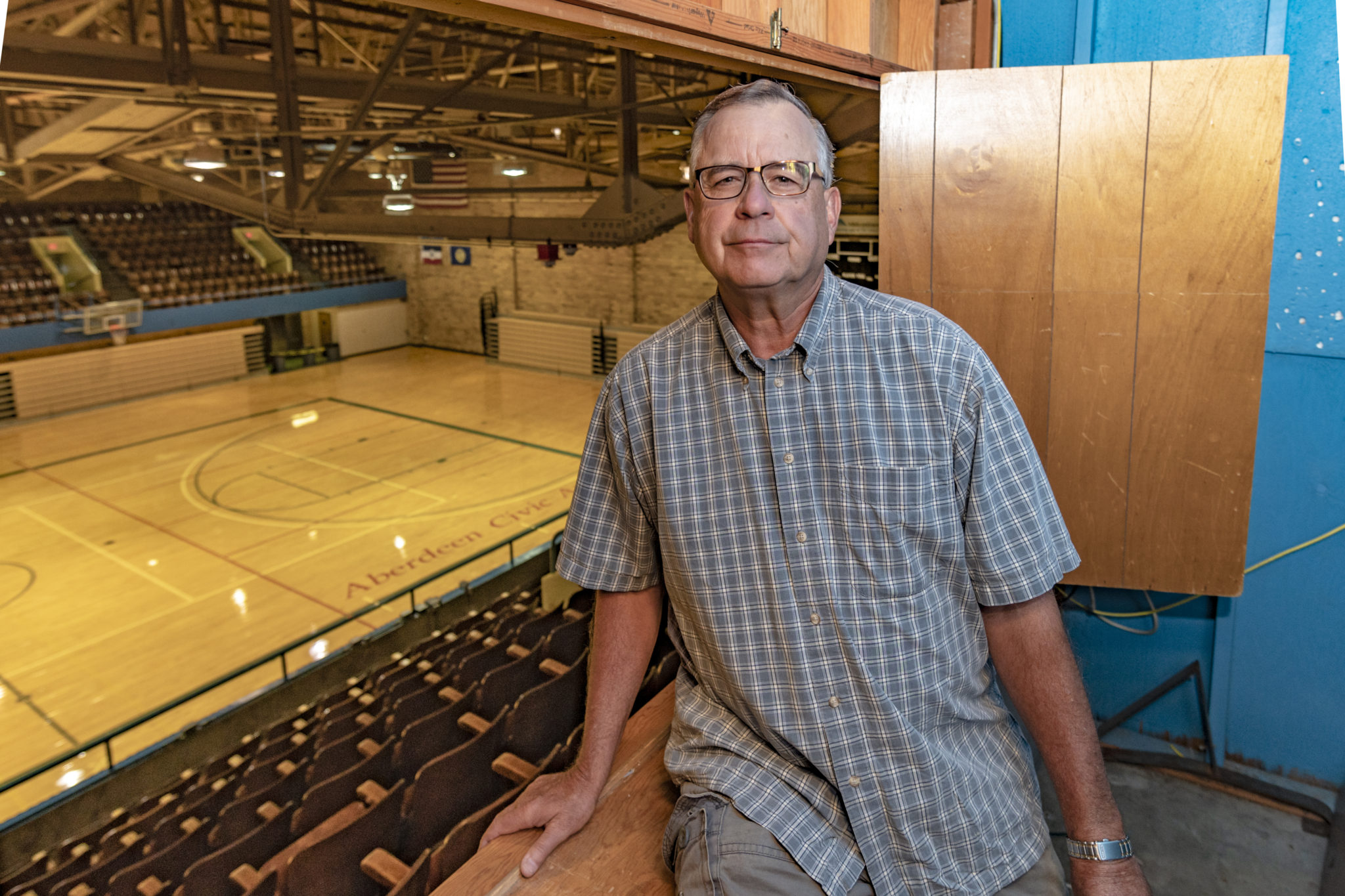 Talking about Sports in the Hub City

When I was a kid shooting hoops in my driveway or hitting a baseball by myself, I often kept up a play-by-play commentary about my game. After all, “What good is it to knock out a ghostly home run, or dunk a phantom basketball, if the world does not hear of it and shout approval?” as the intellectual Garry Wills wrote in his introduction to a Doonesbury collection, “Almost every boy who has ever dabbled in sports has spent hours being three things all at once-performer, announcer, and fan.” Many of us have done this kind of play-by-play-about ourselves. It takes another evolutionary step to do it about someone else, and that’s the job of real play-by-play announcers. And what a great job-to have to watch sports, and talk about it! I visited with a few guys who have been talking about Aberdeen sports for decades. 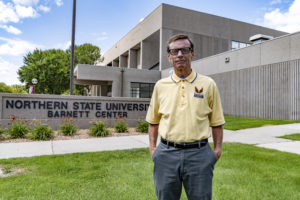 Current Aberdeen Mayor Mike Levsen started as a radio man. He joined KSDN-AM in 1967, when the station was covering Central, Northern, and Aberdeen Pheasants baseball games. For the latter, the announcer sat in the studio rather than the stadium and did “re-creates.” On the air, he described plays he invented to fill in the gaps in time between the game updates phoned in from the field (this is how Ronald Reagan got his start). In a few years, Mike began broadcasting games, and later became station manager. “Doing sports was the fun part of the job though,” he says. “Selling commercials and playing records isn’t too exciting.” And he needed help.

“I always wanted to do play-by-play after I realized I wouldn’t be a pro athlete,” says Gene Reich, who retired this year after more than 30 years of announcing. After college, he got his first radio job in Huron, where he announced a few hockey games as well as some games in the first-ever state girls’ basketball tournament. Then he covered sports for the Aberdeen NBC TV affiliate and a Cedar Rapids, Iowa, TV station, where his first assignment was covering tennis stars Vitas Gerulaitis and Rod Laver. Back in Aberdeen in 1980, Mike Levsen hired him.

Together or separately, Gene and Mike did play-by-play for Central, Roncalli, and Northern football and basketball games. They also did state basketball tournaments even when local teams weren’t playing. “The tournaments weren’t always on TV back then,” Mike says, “and they were really profitable for the station.” In a typical March, Mike and Gene might broadcast 50 games altogether. “Mike and I were really busy doing all these games,” Gene recalls. “Then Scott Solberg came along.” 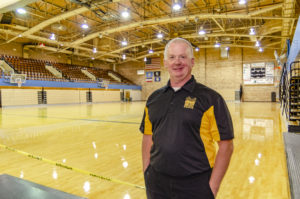 Another Aberdeen native, Scott started his radio career in Gregory and Redfield before returning to KGIM-AM in Aberdeen in the late 1980s. His first football play-by-play was in Ipswich. “They put me on top of a school bus with a table,” he remembers. “I learned that buses have a curved roof, so I didn’t move much.”

In the mid-1990s, KGIM also started broadcasting Central games-the same ones KSDN was covering. This duplication continued into the early 2000s, a time of lots of upheaval in the Aberdeen radio game. Ownership of the stations changed, and staff changed too. Mike and Gene left KSDN, and Gene did play-by-play part-time at KGIM for a while. By about 2005, all the commercial stations in Aberdeen were owned by one company (for a while), and the staffs merged. There was a lot of figuring out who was doing what, and with so many stations doing lots of games, Scott says, “Sometimes you forgot what station you were on.” They could be long days, particularly when winter messed up schedules. Scott recalls “starting a day with my 5:00 AM on-air shift, selling ads during the day, driving to Yankton for a game, getting back at 2:00 AM, and then being on the air again at 5:00 AM the next day.”

Around that time, Scott’s son was starting high school at Roncalli, and he went to watch an out of town game. “The radio announcer had a problem getting there and couldn’t do the broadcast,” Scott remembers, “so I thought, I’m going to be there anyway-I can do the games.” That started a 14-year (and counting) relationship doing Roncalli sports and, Gene says, “Making my life easier.”

Basketball was a much bigger part of these announcers’ careers than other sports. Covering both male and female squads meant three to four times as many games each year as football. “Doing basketball is a different animal,” Scott says. “The gyms and accommodations are all very different. I’ve done games from what seemed like penthouse suites and while sitting in the middle of the opposing cheering section.” He also made sure to mention, “The best place from an announcer’s standpoint to do a game is the Aberdeen Civic Arena! Where we sit now-front row of the balcony, mid-court, behind the scorer’s table-is the perfect blend of having a view and being in the middle of people, so you feel like you’re really involved in the game.”

There are many memories from a combined 80 or so years of sports broadcasting. For Gene, one of the best was one of the few baseball games he ever got to do (the real thing, not “re-creates”), including the Aberdeen Smittys 2007 state championship, which they won in Aberdeen. “That was a big deal for me,” he says. “I’d always dreamed of being a baseball player or announcer ever since I was a batboy for the last Smittys state championship in 1964.”

Scott’s favorite memory may be covering Roncalli’s 2015 state boys’ basketball championship. “It was fun to do a team all year and see them win-plus I’d been covering the team for a decade by then.” Roncalli’s 2007 state boys’ tournament appearance might be more memorable, however, because his son was a senior on the team. “I was a little bit of a blubbering idiot,” on the air during the last game, he admits. “I’d helped coach those kids since first or second grade, and it was special.” (He got a little emotional remembering it too.)

Mike’s favorite is a basketball championship too-the NSU women’s national championship in 1994, when he followed the team to Oregon to cover the games. “It was a great year,” he says, particularly, “watching local athletes-Julie Jensen and Paula Stolsmark (now Krueger, the incoming head coach)-leading the way.” He also remembers several Central-Roncalli playoff games to qualify for the state tournament. “There were a lot of years when they were two of the best teams in the state and one had to stay home,” he says, so the games were “emotional.”

A perk of the job is seeing great athletes, and Gene remembers some of Aberdeen’s best. Eric Kline “was a special player I watched in high school then college.” Former Central and Oklahoma quarterback Josh Heupel was “the best I ever saw.” For high school games, “I had to keep stats myself, and when Heupel came, all of a sudden the numbers got bigger and harder to track!”

Even though you listen to them to find out what’s going on, a good announcer’s job is to be, well, almost invisible (which is hard now because, as Scott notes, video streaming of games is an expectation, and sometimes you can see the announcer on screen-and hear some “off-air” comments). Too many announcers, Mike says, try to become personalities with a trademark shtick. “They need to remember this is the kids’ time, and every second they should be talking about them,” he says. “Anybody doing a game should stop and say ‘this isn’t about me.’”

For many of us, the announcer’s voice is a blast from driveways past. “Almost every one of us so-called adult male Americans is a (failed) jock,” the Doonesbury introduction says. “Perhaps stardom was out of reach; but one might still become the obviously next-best-thing, a sports announcer.” But not just any of us could do that either. // – Patrick Gallagher