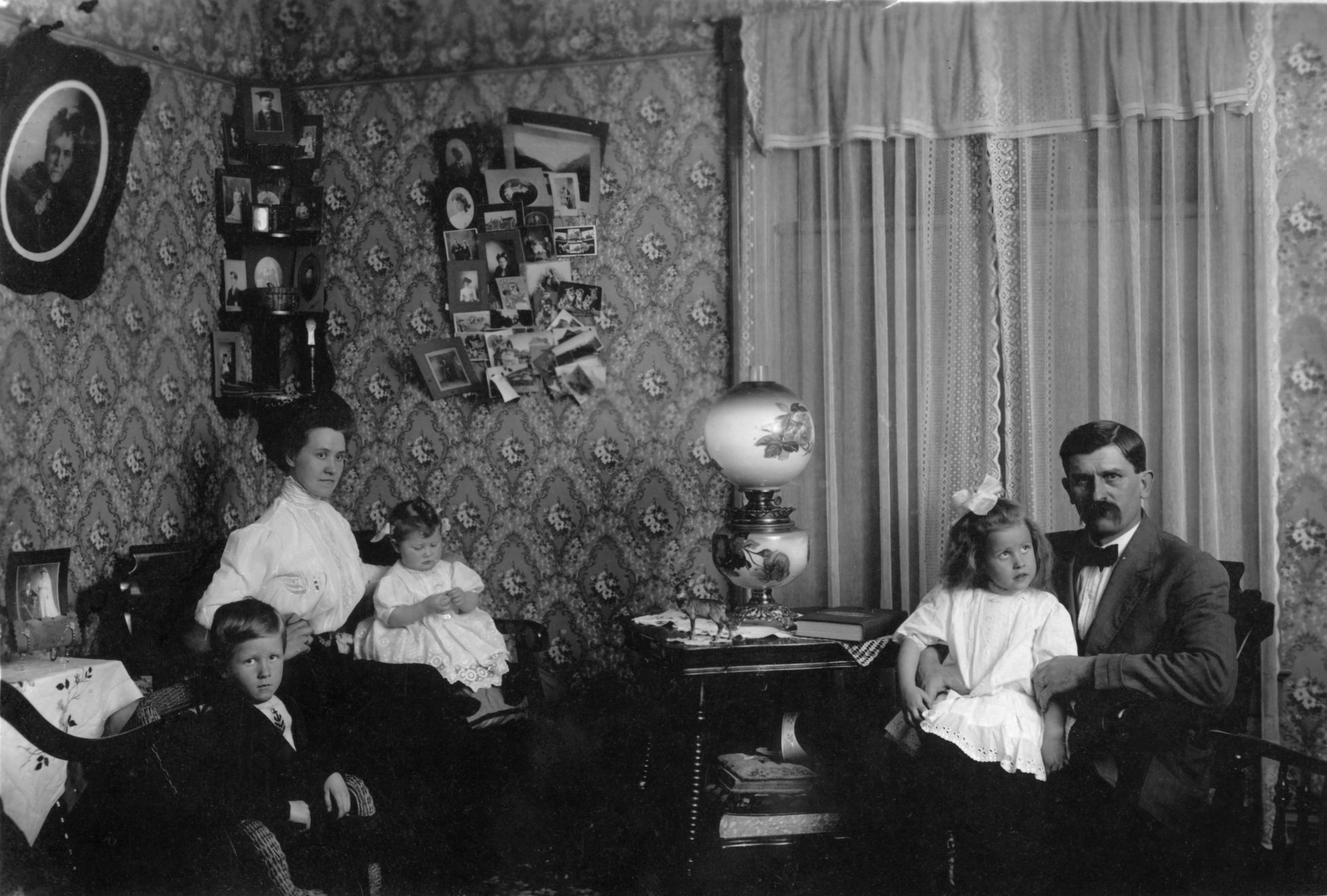 Photographer, Nicholas A. Brothers focused on the Aberdeen scene for over 25 years

I hear from a lot of readers of Aberdeen Magazine that they really enjoy the historic photos we often feature. As I’ve been handling hundreds of photos over the years, I’ve come to notice one particular photographer’s mark on many of the pictures. The mark is either N.A.B. or N.A. Brothers. I had assumed there was a family of “N.A.” brothers that were taking pictures of the Aberdeen region, but as it turns out, it was just one man, Nicholas Arthur Brothers. Unless you subscribe to genealogy websites, a Google search won’t reveal anything about this Aberdeen resident. I was curious as to who he was, why he came to Aberdeen, and what happened to him and his family.

Nicholas Brothers was born in Greenville, Michigan, on September 20, 1871. It appears he followed his parents to Dakota Territory, then ventured back east to Minnesota. City directories indicate he was in construction (in process of building a home?) in 1903 in the Aberdeen area, yet was running a restaurant in Odessa, Minnesota, in 1905. He married a Norwegian woman named, Pauline Rand in 1903 and they ultimately settled in Aberdeen. 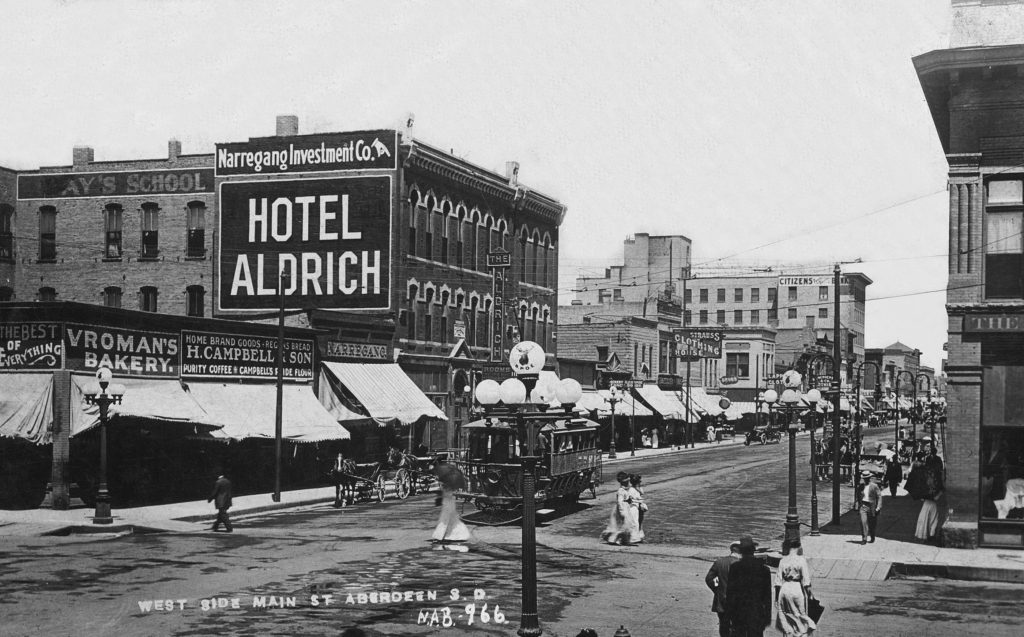 In this similar angle as the image above by Brothers, it’s easy to see why people were attracted to Aberdeen in the early days. A bustling downtown, paved sidewalks, all modes of transportation, electric lighting where all hallmarks of a progressive Hub City. This is probably similar in date to the night scene, 1911.

Nicholas excelled in photography. Pauline helpedby colorizing photos with oil paint and teaching the craft. He started out shooting scenes of farmsteads, landscapes, and Aberdeen. He owned a panoramic camera and was commissioned to shoot wide shots of Aberdeen. His vantage point for some of these was atop the International Harvester building (later Hub City Iron) just west of where the overpass is now. His office/studio was on the second floor at 208 S. Main in Downtown. The building he was in has since been replaced, and now houses The Workshop and Aberdeen Downtown Association. Towards the end of 1914, he advertised that he had taken over the the Miller Studio and would be offering portraiture work of the highest quality. By the end of the next year, he abandoned his field work to work explicitly on portraits.

On April 3, 1921, these twelve Aberdeen women were featured in the Minneapolis Tribune as part of a regular feature called, Fair Women of the Midwest.

Brothers was a good advertiser and many of his newspaper ads were blunt and to the point about how established, equipped, and skillful he was at portraits. In one ad he called for 100 blonde women to have their photo taken for free, brunettes to follow. In 1921, he submitted a dozen portraits to the Minneapolis Tribune for a weekly page called, “Fair Women of the Northwest.” Beautiful women from Midwest cities were featured each week. Aberdeen’s portraits were featured on April 3, 1921.

Nicholas’s father, N.V. Brothers, owned several lots in the West Hill subdivision (Lincoln School area) when he passed away in 1908. Nicholas and his two brothers inherited five houses and several lots on Third Avenue SW. Nicholas and Pauline took up residence in several different houses over the years including 903, 909, 1203 (now gone), and 1209.

Nicholas experienced his share of tragedy while in Aberdeen. In 1911, his two young daughters, Viola and Pearl Brothers died of scarlet fever just days apart. His son, Roy, survived. Nicholas and Pauline went on to have four more boys (Paul, Harvey, Neil, and Earl). Then in 1929, when his wife Pauline was visiting family in Minnesota, she became ill with pneumonia and died of complications. This, of course, was the year the Great Depression started. In May 1930, three of his properties in West Hill were foreclosed on. Later that year, in August, a fire started in the basement of his home at 1203 Third Avenue SW, however the fire department was able to stop it in time before the whole house was lost. The state brought charges against Brothers on suspicion of arson shortly thereafter. The case was dropped during the preliminary hearing due to lack of evidence.

Socially, Mr. and Mrs. Brothers were very active in Aberdeen. They were active members of Bethlehem Lutheran Church, Pauline hosted many socials at their house, and Nicholas was quite involved in organized checkers and Modern Woodman. 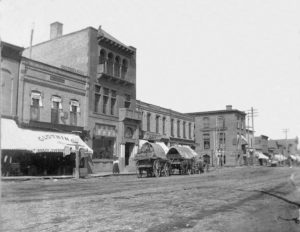 This building at 208 S. Main is listed as N.A. Brothers’ studio. It looks completely different today (It’s now The Workshop, formerly Boomers bar and Misters Men’s Wear). Brothers always mentioned in his ads that his studio was above a jewelry store called, Sauer’s which isn’t shown in this image (presumably not by Brothers). Subsequently it is unclear if the “Photographing” sign on the top of the building refers to N.A.B.’s studio. This picture is definitely before 1909.

Heretofore, most all of this information came from Aberdeen newspapers of the time. After the arson charges, there is little mention of N. A. Brothers. His obituary doesn’t even show up on paid subscription services. The K.O. Lee Aberdeen Public Library has a small clipping file on Brothers and it does include his obituary. In it, it says he moved to Bowdle in 1932 and died August 17, 1942. I was able to locate his obituary in the Bowdle newspaper as well and that stated two of his sons (Neil and Paul) helped him with his photography business called Bowdle Photo Company.

Having as many sons as he and Pauline had, it would only make sense that descendants would still be around. And they are. I was able to locate a grandson in Idaho that still has many photos of Nicholas and Pauline. Tom Brothers’ mother is still living and is the wife of Nicholas’s son Harvey. Tom was very gracious to help me with pictures. He wasn’t sure what happened to all the photos and negatives that N.A. Brothers created while in business, but he believes everything was left in Aberdeen.

Nicholas Arthur Brothers, his parents, his wife, his brother, an aunt, and his two little girls are all buried here in Aberdeen at Riverside Cemetery.

We don’t really know what possessed Nicholas to take up photography. Some records indicate his father was a photographer. Whatever the reason, we are grateful he turned his camera to the booming town of Aberdeen in our early years. Because of him we have a tremendous amount of photographic reference for buildings, farming, railroads, people, and families. Take a look in your family photo albums. Perhaps you too have some portraits by N.A. Brothers. // –Troy McQuillen