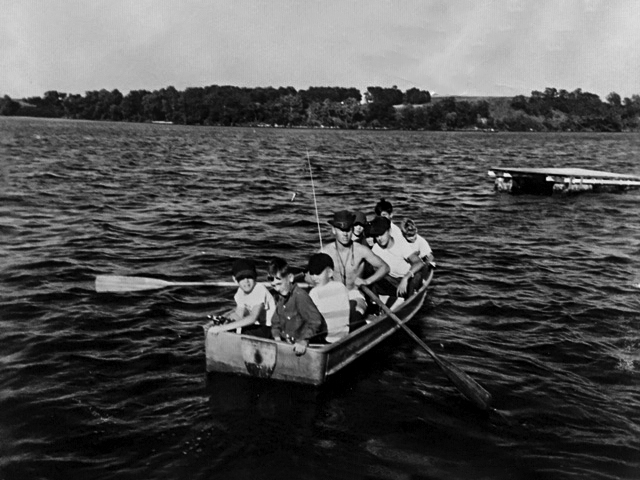 ABERDEEN, S.D. –When Ken Kirkpatrick sent us his story about Harmetta, The Pickerel Lake Ghost, we asked on the “You know you’re from Aberdeen, South Dakota, if…” Facebook group if anyone had witnessed Chuck and Ken’s escapades or otherwise heard of this campfire legend. We almost immediately received close to 75 responses! As it turns out, “Harmetta” frightened Camp Wisagoma youth for decades. Campers from the 1960s all the way through the 1990s chimed in with their memories of the tale. The story seems to vary slightly among generations, no doubt the result of being depicted a bit differently by each camp counselor who told it and added their own spin on the details.

What also emerged with these recollections was the history of Camp Wisagoma. The camp dates back to 1928, when a private resident donated 11 waterfront acres on Pickerel Lake to the YMCA. Roughly 30 campers slept in tents that first year, as cabins hadn’t yet been built. In fact, construction was an integral part of the camp’s activities in those days. An American News insert from 2001 featuring the YMCA reprinted an interview with Reedy Fossum and Roger Birdseye, two campers who were there in 1928. They shared that when they weren’t hiking, swimming, and playing softball, they kept busy building the site’s dock. Campfire stories were a big hit from day one, and Birdseye remembered ghost stories and pranks orchestrated by the camp counselors. The following year, four cabins, each capable of sleeping eight people, were built at the camp by a handful of Aberdeen service clubs. 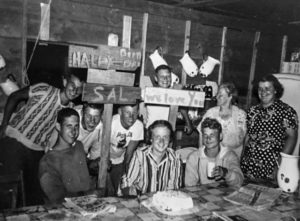 Camp Wisagoma continued every summer until World War 11, when food and gas rationing forced them to be inactive from 1942 to 1947. Afterward, the YMCA had the chance to sell the site for $11,000, but Bob Johnston, the boy’s director for the Y, asked to run the camp for just one year first. They agreed, and the new camp director had his work cut out for him. He described to the American News how they had to get the area back into working shape after it hadn’t been used for so long. “When we got out there for the first time that camping season, sunflowers were as tall as the cabins, mattresses were rotted.” They also lacked electricity and therefore working refrigerators. Johnston added, “We used 300 pounds of ice a day and we had to haul it from the south end of the lake to the camp area. We put the ice in a big old beer cooler so we could keep food cold. That summer we added electricity.” 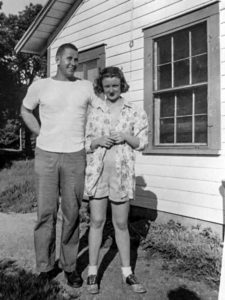 Bob Johnston and his wife Sally directed Camp Wisagoma for about a decade.

The camp passed this year-long trial period, though, and the YMCA decided not to sell. Bob managed it for the next 10 years or so, including the summers of 1953 and 1954, when Chuck and Ken Kirkpatrick pulled off their Harmetta disguise. His wife Sally helped as the camp nurse, and the couple lived at the camp in the summer months. When their son Kerry joined the family, he got to grow up at Camp Wisagoma. He told the American News, “My dad took kids out there…most were underprivileged and couldn’t afford the camper fee, but he would get individual benefactors in town to help by giving a campership.” He continued, “The intent was to change kids’ lives, to do that you need to change their environment.” Going to camp was fun, but it also encouraged kids from different backgrounds to work together. And at a time when there were fewer opportunities to go places or have experiences away from home, camp was the highlight of the summer.

Almost 50 years after its first season, Camp Wisagoma was still going strong. In 1976, Doug Card, a staff writer for the American News, listed “archery, riflery, swimming, canoeing, sailing, and various crafts,” as well as “overnight trips to Sieche [Sic] Hollow, Fort Sisseton, and other state parks,” as the main activities for the roughly 160 campers in attendance that year. Card added that the fee for one week of camp was $50, and that many campers sold candy bars through the YMCA candy sale to earn their way, while others received camperships from local businesses and individuals. One mother who sent her son to Camp Wisagoma told Card the best part of camp was that it “just allows boys to be boys.” 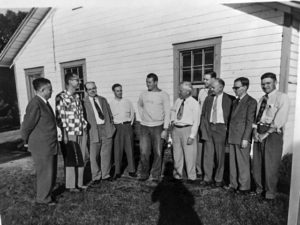 In 1950, members of the Kiwanis Club visited Camp Wisagoma and director Bob Johnston (center). The club sponsored many campers and furnished one of the camp’s cabins.

As times began to change, more and more activities for kids—like sports camps and church camps—began popping up, and the demand for Camp Wisagoma changed too. The Y adapted for a while, adding a girl’s camp that eventually became a co-ed camp, and even swapping out their traditional agenda for history and computer camps. Even so, the enrollment numbers kept declining, and in 2003 the YMCA sold their property on Pickerel Lake for $2 million.

After a 75-year run, Camp Wisagoma came to an end. But maybe not. After all, people are still telling stories, ghostly or otherwise, and sharing their collected memories of the camp. As long as they do, Camp Wisagoma will continue to be a familiar name in the Aberdeen community for generations to come. // –Jenny Roth

Thank you to Alice May of the Aberdeen Family YMCA and Susan Johnston for supplying resources and photos for this story.