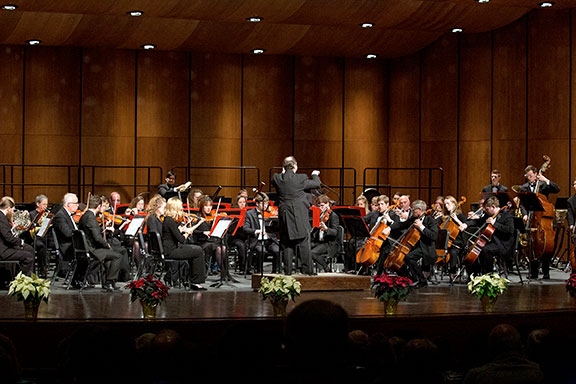 A hundred years after their very first note, the Aberdeen University-Civic Symphony sounds better than ever

Before radio, before records, and way before TV, if you wanted entertainment, live music was it. And in the early 1900s, any city who was anybody had its own symphony.

Northern State University established their Normal Orchestra as early as 1906. It was an instant community hit. A few years later, the Aberdeen Municipal Band (led by H. C. Bronson) put out the call for local string musicians to come forward for a meeting of the city’s first symphony orchestra. The announcement in an October 1919 edition of the Aberdeen Daily News read, “It is desired that no player be overlooked, and to this end Mr. Bronson extends an invitation to all players to be present.”

By the following year, the university symphony and the city symphony were playing together, under conductor Howard Elson Goodsell. The Daily News predicted the symphony’s success, “The new orchestra may be the founder of a symphony orchestra in later years that Aberdeen will be proud of.” They were right. A century later, the Aberdeen University-Civic Symphony (AUCS) is the oldest, continuous running orchestra in the state. More importantly, they still perform for sold-out crowds. Of course, they have seen plenty of changes over time; in name, in performers, and in conductors. What has remained the same, though, is that the music is still for everyone. Dr. Christopher Stanichar, present-day AUCS conductor, echoes that first call for musicians from 100 years ago, “The really cool thing about orchestra is that it is so uplifting. It brings people of all backgrounds and abilities together to work on a performance.” 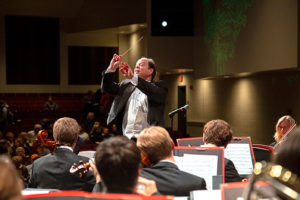 This is Conductor Stanichar’s second season with AUCS. He continues to recruit new performers to the symphony, from high schoolers and college students to community members and professionals.

This is Dr. Stanichar’s second season with AUCS. He also leads two other symphonies, one in Iowa and another in Minnesota. The reason he travels across the Midwest is for the music. For him, each performance is like an exhibition of art, and there is no sound like the symphony. The minute he heard his first live orchestra concert as a kid, he knew he would work in the music world someday. “I sat there and just froze,” he remembers. “It was unlike anything else I had ever heard. I decided then and there that this is what I wanted to do.” He describes AUCS as a hybrid symphony—composed of a mixture of people, which is what makes it so special. High schoolers, NSU students and faculty, community members, traveling musicians from the surrounding area, and professionals all come together to play their instruments.

AUCS has about 65 performers, 90 when joined by the Central High School Orchestra. The group meets weekly and performs three concerts each season. Even though there are more options for entertainment vying for the attention of audience members these days, Dr. Kenneth Boulton, Dean of NSU’s School of Fine Arts, says AUCS’ numbers are on the rise. They have twice as many string bass players as last year, and a number of new violinists. On average, their performances attract 350-600 ticket holders, with some shows bringing in closer to 1,000. Dr. Boulton credits Conductor Stanichar for this continual growth. “Christopher has been very effective in recruiting additional performers. They all want to play for him and the energy he brings to the orchestra.”

Professional and enthusiastic leadership, combined with the one-and-only experience of symphony, all have contributed to AUCS’ success. JoAnne Barry, a longtime fan of the orchestra, says the performances are truly timeless and multigenerational. “There are no words with symphonic music, so it pulls at your imagination and allows you to create your own story to go with the emotions you hear. When those waves of music hit you—there’s nothing like it. There’s just something about those strings.” // –Jenny Roth

For tickets, or to learn more about the Aberdeen University-Civic Symphony, visit facebook.com/AberdeenUniversityCivicSymphony or call 605-626-2497.