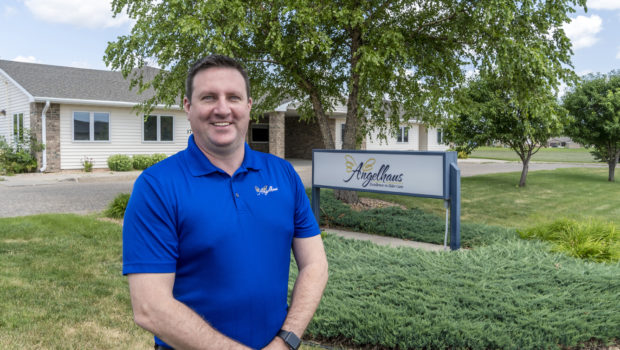 How one Aberdeen family is changing everything you know about senior living.

Surrounded by windows that let in plenty of natural light sits a cozy living room full of gliders and rocking chairs. The fireplace takes up one corner of the room, fit snugly between a shelf full of books and a door leading to the garden and gazebo. Close by are the kitchen and dining room, with bedrooms just down the hall. If you feel like you have just walked into a house, it’s because you have—Angelhaus, to be exact. At any given time, it is home to about 16 senior residents. It was designed to feel very homey, but also to be very functional in providing care. Centered in the middle of everything is a nurse’s station. At least two people are on staff here 24 hours a day, seven days a week.

So what exactly is Angelhaus? A nursing home? An assisted living? Technically, the answer is the latter. However, as owner Nathan Gellhaus puts it, they are an assisted living plus. That plus he refers to are the nine optional, state-licensed services they have opted to give their residents, some of which include memory, oxygen, diabetes, incontinence, and hospice care. Traditionally, people will live in an assisted living until their health no longer allows it and they have to move into a skilled nursing facility. Angelhaus is different because they strive to take care of each of their residents for the remainder of his or her life.

In South Dakota, trending in everyone’s news feeds are reports on how rural nursing homes are closing, while healthcare costs continue to rise far beyond the covered reach of Medicaid reimbursements. Caring for seniors also comes with a lot of regulations, a lot of unpredictability, and a lot of competition. In Angelhaus’ case, these challenges are evenly matched up against an entrepreneur who has weathered his fair share of business ups and downs. But before we talk about Angelhaus today, it’s important to know the beginning of their story. 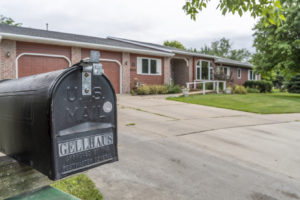 Marilyn Gellhaus founded the first Angelhaus in Aberdeen in the 1990s. Today, the care center has two locations. This house is located in Ashwood Heights, northeast of town.

In the early 1990s, Ken and Marilyn Gellhaus were driving across the country to visit family. A stop at her brother’s house in Idaho ended up not only changing their lives, but the way the entire Aberdeen community would look at senior caregiving. Her brother and his wife, who was a nurse, lived on the second floor of their house and took care of four individuals who lived on the main level. Marilyn saw how they made meals, helped manage medications, and provided a safe and sociable environment for their tenants. On their drive back home, she decided she was going to do the same thing as her brother and sister-in-law. So at 62 years old, she did. Why would someone who had just reached their retirement take on something so big? Because caring for people was one of Marilyn’s gifts. About his grandmother, Nathan says, “She raised four boys and was always going, going, going— nonstop. I think this kind of thing appealed to her because she was always so thoughtful, always an amazing caregiver, and always cooking the most wonderful food from scratch. She was 62, but she still had so much life in her and she knew she could do this.”

Soon after returning to Aberdeen, Ken and Marilyn built the Gellhaus Carehaus on 13th Avenue. Half of the home served as their living quarters, and the other half was set up with enough rooms for six senior residents. Just like that, the initial Angelhaus was born. While today they provide a higher level of care, in those early days they served people who were new to senior living, serving them good meals and hosting activities. It didn’t take long for the Gellhaus Carehaus waiting list to grow. A few years later, Ken and Marilyn’s son Dennis moved back to Aberdeen and opened Gellhaus Carehaus 2 at 1005 North Redwood Lane. Today, that nine-bedroom home is a licensed assisted living known as Angelhaus North.

Angelhaus’ east location on Melgaard Road came to be a few years later in 2000. At a golf tournament held in memory of his brother, Dennis met Clara Nolz, a soon-to-be retired director of nursing with 25 years of experience in her field. Together, they created the vision of what Angelhaus is today—a place that bridges the gap between residential and nursing home care and provides enough services to care for residents for the rest of their lives. Nathan explains, “At the time Angelhaus was getting started, this was a budding concept. There were not many assisted living facilities in South Dakota.”

Clara managed Angelhaus until Nathan took over a decade later. Just months after he purchased the family business, a survey by the Department of Health determined that seven of their 16 residents were above the level of care of an assisted living and therefore had to move out. The State was also undergoing large policy changes at the time, making the boundaries between assisted livings and nursing homes clear where they had once been more blurred. This was a devastating blow to Angelhaus, both emotionally and financially. Nathan says, “We knew—and the families of our residents knew— that we were capable of providing the care for our people that we had always done. For the State to come in and say that we couldn’t run our business that way — it was like a perfect storm.” But instead of giving up, they went to the state legislature and the governor, writing and advocating a bill that would allow an assisted living to provide more services. Eventually, they were successful and granted the ability to offer dining assistance and two-person transfers to residents, two services that were previously reserved only for nursing homes. “It was a long fight but we preserved the Angelhaus care model,” Nathan says.

With 16 beds at one site and 11 at the other, the staff at Angelhaus, who are all trained and certified nurses and nursing assistants, can spend more one-on-one time with each resident. Nathan speaks highly of his roughly 40 employees. “They are great. We can take the time here. It’s not one aide for every 16 people, it’s four aids taking care of 16 people, so things are not as rushed.” He continues, “We provide a very high level of healthcare, comparable to a nursing home, but we do it for significantly less and with a more family-oriented atmosphere.” According to Nathan, the average cost to live in a traditional assisted living in the area is usually about $3,000 to $5,000 per month, and the average cost of a nursing home stay in a private room starts at about $8,000 per month. Angelhaus’ monthly rate is around $5,800. All of their residents are private pay.

Nathan says Angelhaus was the first stand alone assisted living in the state to provide the nine optional services that they do, and that there is nothing like them anywhere else in South Dakota. “We are way more than an assisted living, we are essentially a nursing home alternative. That is the model we have always had and will always work to keep.” /— Jenny Roth

Just a Boy and His Moose →