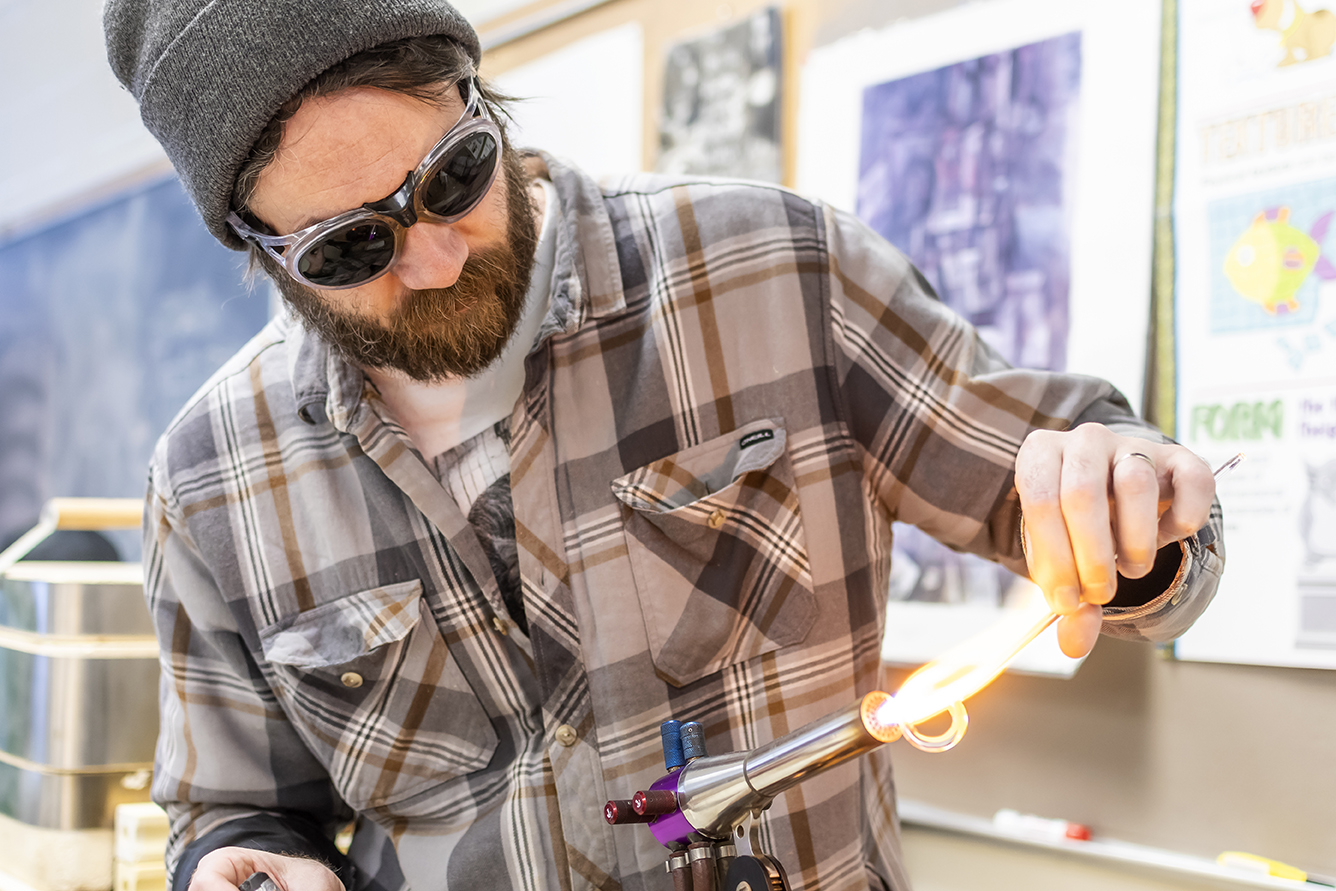 Caleb Crosby sets up a glassworking studio with free demos and classes in Aberdeen.

Glassworking, like most art forms, preceded the Internet. Teachers passed down techniques and skills of the trade to their students for centuries without the aid of clicking a button and watching a video online. That’s how Caleb Crosby learned the art form he loves so much, and that’s how he’s teaching everything he has learned over the past 20 years to new glassworkers. Anyone in Aberdeen who wants to get started in glasswork only needs to head to the Aberdeen Recreation and Cultural Center on Thursdays. There, Caleb provides a free glasswork demo in the afternoon, followed by an evening class that teaches students the basics of making glass marbles and pendants. 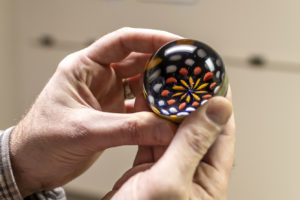 Caleb Crosby has been a glassworker for most of his life. At his studio in Aberdeen, he manipulates glass with a torch using a technique called lampworking.

There are two styles of glassworking, soft glass blowing and lampworking. Both have their advantages, depending on what you want to create. Lampworking is most friendly for sculpture work and if you want to have a lot of control over your colors and small details. While Caleb has decades of experience in both, his classes in Aberdeen focus on the latter. Lampworking is the more modern type of glasswork. In it, the artist uses a high-temperature torch to heat and manipulate borosilicate glass. The glass starts out as a tube and with gravity, thermodynamics, and a lot of practice can be transformed into all kinds of figurines, marbles, beads, and more. It sounds easy, and Caleb makes it look easy as he fashions a flowered glass pendant over a torch in his studio at the ARCC, but in reality, it’s years of trial and error that have gotten him here. He says, “I used to be way more impatient in the beginning, getting frustrated and giving up on pieces if they weren’t turning out the way I wanted. Now I’ve learned to save just abouteverything. If I have 40 hours into a piece, I’m not going to give up on it if I make a mistake. I’m going to work to fix it until it’s right.”

Caleb first tried his hand at lampworking in 1998. “A friend of mine had a book about it and a beginner’s torch. I watched him for a while, and then one day he turned on the torch and said, ‘I hope you’ve been paying attention,’ and left me to figure it out.” He laughs, “It turned out to be a lot more difficult than it looked, but that was his teaching style. He never stood over my shoulder telling me what to do. He let me figure it out and afterward would critique what I did well and what could have been better.” He adds that at the time the only way to really learn the art was to find other lampworkers, but most of them were a bit guarded in trading ideas and sharing their techniques. “I lucked out and found a friend who was willing to help me learn. Then we brought more and more people into our studio, until we eventually had about 15 people all at the same table working at the same time. It really sped up the learning process for me,” he says.

In Aberdeen, Caleb has partnered with friend Aaron Johnson to create Switchback Studios located on the first floor of the ARCC. Aaron is new to lampworking and Caleb predicts his learning curve will go a lot more smoothly. “It took me about three years of practicing before the things I was making turned out the way I had intended them to. But I suspect Aaron’s progress is going to be much faster than that. If he has enough time at the torch and once he understands what he is working with, he can find just about any technique on the Internet and watch someone do it. It’s a whole different world for learning.”

Switchback Studios has glass items available for walk-in purchases, but Caleb says most of his sales have always come from custom orders. He adds he is always up for the challenge of making whatever the customer can dream up. During our interview, he was planning an order for a custom-made glass vessel meant to hold the ashes of a loved one following their funeral services. Having a full-time studio and gallery is the best way to connect with art collectors and custom orders, and this is something Caleb hopes to build in Aberdeen. Before moving here in 2018 to be closer to his wife’s family, he worked in a glass blowing studio in California, using both soft glass and lampworking techniques. He says he was the only lampworker in that area, and this small-town advantage is something he recognizes here in Aberdeen too. “If you are good at something and live in a smaller community, eventually everyone is going to find out about what you do. That’s definitely the advantage of being an artist in a town like this one that supports its local artists and art programs.” // — Jenny Roth