People
Costume Design: At The Seams
By Karlie Spiry | May/June 2020 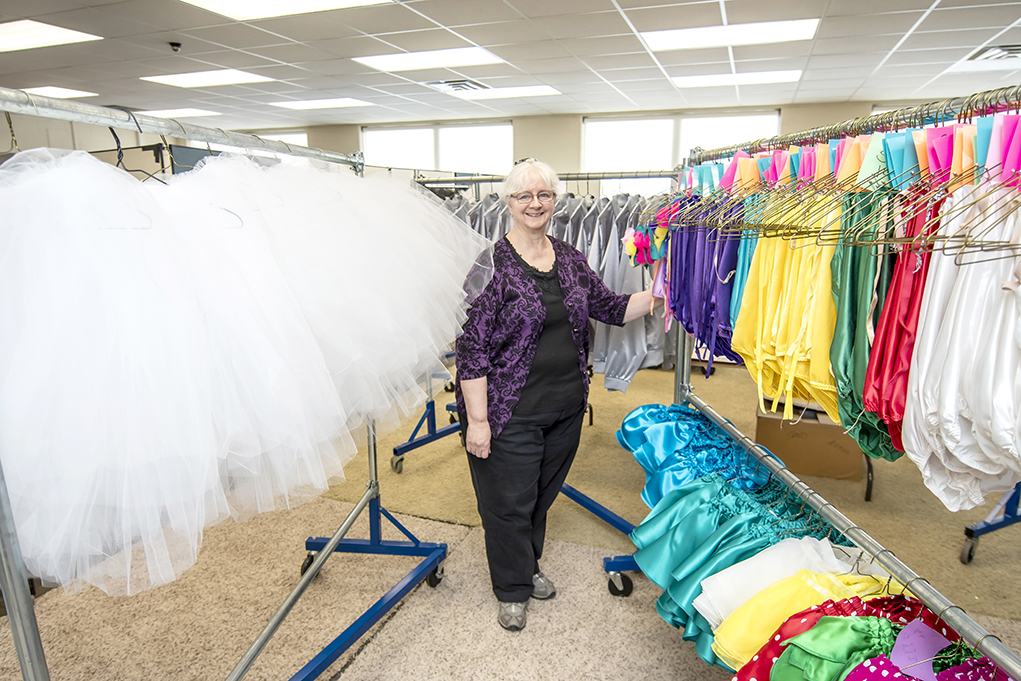 Costume design is an art unto itself where the right piece of clothing can enhance or distract from a performance. This is a look at the life of a veteran costume designer.

Theater sweeps audiences up by the show itself, by sets, or even by musical numbers. What often gets overlooked are the people who put these shows together. Whether it be a commercial, a movie, or a stage production, the people that played a part in handcrafting the show are usually the ones that go unnoticed.

For the past 20 years, Marilyn Davis has been the costume designer at the Aberdeen Recreation and Cultural Center (ARCC). She studied costume design at the University of Missouri, Marilyn developed a knack for sewing in her youth. But it was her children’s passion for theater and performance that led her to costume designing. “I got involved with the things my kids were involved with, and then over time, sewing turned into a job,” she says.

Her daughters Amanda and Emily played big roles in Marilyn’s seamstress career. Marilyn’s eldest daughter, Amanda, took dance classes. When they needed help costuming, Marilyn was the woman to volunteer. According to Marilyn, at the time, she did sewing at home for the ARCC on a contract basis for several years. Once the old costume designer left, she took over.

The Life of a Designer

A typical day of work for Marilyn varies depending on the time of the year. The other part of her job at the ARCC includes managing the sales of dancewear and once September rolls around, things pick up quickly for Marilyn. On top of doing sales, she along with two other seamstresses, do all the fittings and sewing for the ARCC’s 921 dance students. During the fall, each student is measured for their costume and fitted for their shoes, a lengthy process that takes several weeks.

While that is all happening, pieces from the ARCC’s stock of costumes are pressed, steamed, and bagged for each dancer to take home until the recital is over. “It’s a lot of work, but we have so much fun in the costume shop!” Marilyn always speaks highly of the effort put in by her co-workers, “The people I have working there are very good at what they do.”

Getting the Details Right

It’s not all tap shoes and tutus for dancers at the ARCC, however, as Marilyn says, “Most costumes have about five to six pieces per student. It could be a leotard, skirt, and shoes, but they could also have vests, gloves, armbands, ruffles, and or hats. There are a lot of different pieces that can go out for any performance.” The items are then returned to Marilyn and her team in heaps of laundry, which she jokingly says is her favorite thing to do.

What’s been her favorite costume to create? The colorful, long ballet skirts dancers wear as they prance across the stage. It’s a costuming trick used to create an illusion of multicolored fabric. When the light catches it just right, it creates an elegant rainbow effect that wows the crowd. She says her favorite costume of the current season is a tailored boys costume. “We designed a boys costume that is sharp! It’s black with a silver glitter pinstripe vest over a black shirt and pants with a silver tie and a hat that has a silver band around the brim.”

Marilyn’s costume design talents are seen onstage at the Aberdeen Community Theatre (ACT). Much like how she started at the ARCC, she volunteered at ACT because her daughter was involved with Young People’s Theatre (YPT). The first major production she did the costume designing for at ACT was Anything Goes in 2006. “I’ve probably done close to 30 or 40 shows, with about three or four shows a year.” At the time of this interview, Marilyn was working as a member of the crew for ACT’s production of James and The Giant Peach.

Marilyn’s process of working on a production at ACT is a bit different than at the ARCC. More research is necessary on Marilyn’s part. Marilyn needs to get everything accurate to the script’s directions. “Once I have a cast, I measure them and then I read the script. I take extensive notes of the script and what each character needs.” She then goes through ACT’s substantial inventory of costumes in the basement of the theatre to find what she can use. For Marilyn, one of the best parts about designing costumes is shopping for the extra bits needed to complete a look, “I’m hitting up the thrift stores, or sometimes we borrow from other theaters or ACT people, or actors bring stuff in to use.

The people she works with both at the ARCC and at ACT play a significant role in what keeps her inspired. Getting to work on so many different shows has brought Marilyn much joy and learning. “Every show is different with sets, dances, time period, and you learn something new because it’s different. I learn something new from every show.”

She thought of the days when YPT would put on summer shows. Marilyn recalls the excitement kids would have as they would learn about costuming and explore ACT’s costume inventory. “They said this is like a dress-up dream come true!”

As for the future, Marilyn doesn’t plan to stop costume design anytime soon. In fact, she plans to pursue some of her own costuming projects at home. She started by creating a sewing room for herself. Becoming a grandmother has also sparked Marilyn’s interest in making cute stuffed animals and clothes for her granddaughter Maisie. //–Karlie Spiry