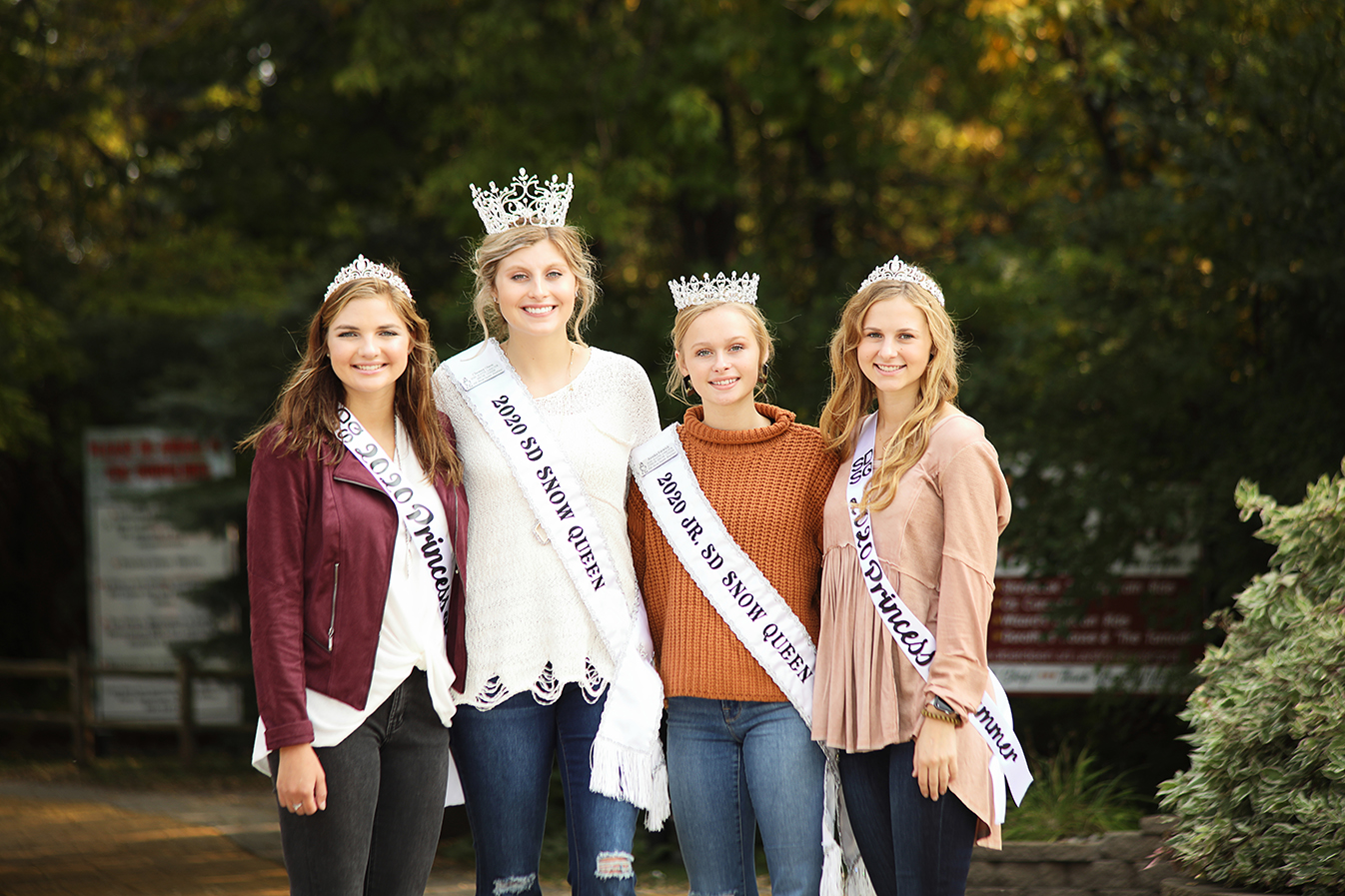 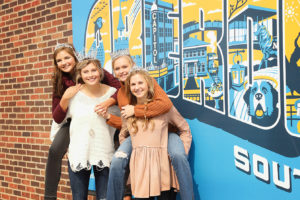 Hours of preparation go into this moment. Teen girls from across the state travel to Aberdeen for their chance to win a crown that even Elsa is envious of. They wear their best dress, don their finest shoes, and get glam for the occasion. Most of all, these ladies represent the very best of the communities they come from. They are the South Dakota Snow Queens.

For the South Dakota Snow Queens (SDSQ), 2021 marks the festival’s diamond anniversary. It’s been 75 years since the first scholarship event was held in January of 1947 in Aberdeen. That year, the Saint Paul Winter Carnival approached Aberdeen with the idea of becoming a satellite for the Minnesota winter festival. It was a small but elegant affair in Aberdeen, with just a few contestants from the Hub City and surrounding area towns. The contest was decorated with leftover Christmas decorations, and the very first queen was Aberdeen’s Dorothy Lockington, who ousted 19 other girls vying for the crown.

In the contest’s 75 years, a lot of things have changed, but the values of the competition have remained focused on scholarship and character. At the 2020 festival in January, Chesney Olson of Langford was crowned queen, and Annika Estwick of Sisseton was crowned junior queen. Both competed against 30 other talented girls from across the state for their respective titles, and that’s not including the competition they faced at their hometown preliminary contests the month prior. 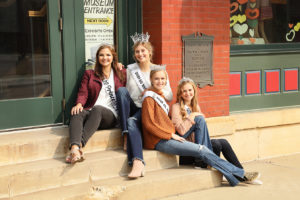 Members of the Snow Queen Royal Family can travel around the state as ambassadors of the scholarship program.

The South Dakota Snow Queens Festival isn’t your typical beauty pageant. In fact, it’s not a beauty pageant at all. You won’t even find the word pageant used with the festival’s name. It’s actually a glamourous scholarship program that looks to the heart, character, and personalities of the young women competing while promoting strong South Dakota values like hard work, responsibility, and kindness.

Almost every girl to have competed in Snow Queen has her own success story. “Many have gone on to become lawyers, doctors, business owners, community leaders, and in the case of one queen, Governor of South Dakota. Governor Kristi Noem won Snow Queen in 1990,” said Elizabeth Flannery, president of SDSQ. 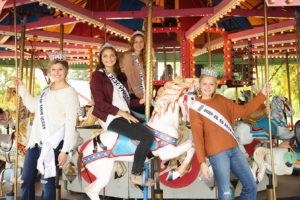 How does one exactly go about becoming a Snow Queen? It starts at the local level. High school senior and freshman girls are encouraged to compete in their hometown’s Snow Queen contest. According to Elizabeth, there are about 30 contests that take place each year across South Dakota. The two lucky winners of their hometown contest can continue to the big festival held in Aberdeen at the beginning of each year. Once at the festival, it’s a weekend full of events, fun, and competition.

Contestants face several rounds of interviews that allow them to show off their personalities and for the judges to get to know them. “Being a well-spoken and well-rounded individual are just two of the things that our judges look for in winners,” said Elizabeth. The judges then observe the contestants while interacting with their “little sisters” at events like skating with Frosty or participating in craft projects at Colorful Creations throughout the festival weekend. 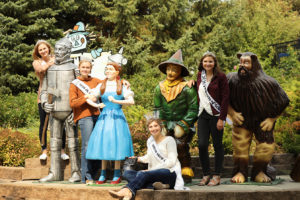 South Dakota Snow Queen isn’t a beauty pageant but rather a scholarship program. Queens receive a $3,500 or $2,000 scholarship to any university of their choice.

After the girls take their final walk across the stage, the judges confer who should be the winner. Of course, there is also the shenanigans with Frosty at each coronation, but more on the mysterious snowman later. After the winners are chosen, they must fulfill the role of being an ambassador of SDSQ. The two winners will receive a title, crown, and most importantly, a scholarship to any university of their choosing. The 2020 Jr. Queen and Queen received a $2,000 and $3,500 scholarship, respectively.

Snow Queens are ambassadors of community service. Elizabeth said, “We believe in encouraging our Queens to be individuals and to be involved with things that matter to them.” The queens can choose charities and commit to charitable acts that can make a difference. Some past queens have visited nursing homes, while others have volunteered with church groups and read stories to children at the library. Every queen is a volunteer at the Brown County Fair, and they work with the fair board doing various things. This year, Chesney and Annika gathered facemasks and cleaning supplies that were donated to a local elementary school. 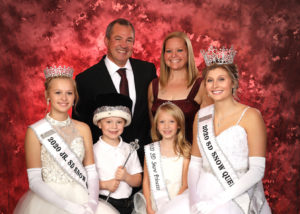 But no Snow Queen family is complete without Frosty the Mystery Snowman, who is almost as old as the contest itself. Frosty was introduced to Snow Queen in 1948 and resides over each festival as a place of honor. The identity of Frosty is kept secret throughout the year until the night of coronation. He or she is chosen by the Snow Queen Captain and Guards based on contributions made to the festival, the community, and to South Dakota. Mike Carrels was honored as Frosty in 2020.

The Snow Queen Captain and Guards also serve an essential role in the myth surrounding Frosty. The Guards are made up of past Snow Queen Presidents and Ambassadors. They wear traditional guard attire on outings and speak for Frosty to keep his identity under wraps. The Captain also carries a stick that is passed along to the next. There has only been one instance in which Frosty’s identity was close to being revealed. It was 1973 at the Zebra Lounge in Aberdeen. As the legend goes, one of the guards broke a pool cue in half to defend Frosty from unmaskers. It was later revealed that the brave guard was Jerry Feickert, and he simultaneously saved Frosty’s identity and created the tradition of the stick. The stick is exchanged between captains every year, and the original pool cue used by Jerry is on display at the Dacotah Prairie Museum. 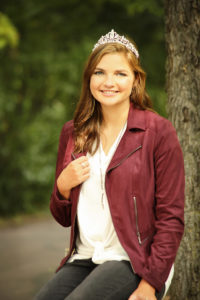 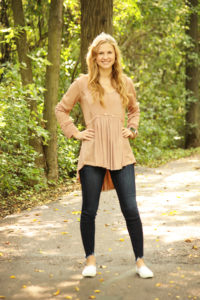 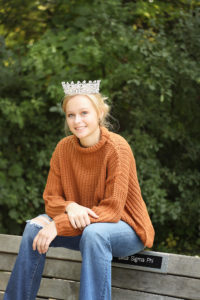 Of course, there is some uncertainty for Elizabeth in whether the diamond anniversary of the contest will happen in 2021. At the time of the interview in early September, not all of the details for the festival had been ironed out. Still, the Snow Queen Committee is continuing to be flexible, and ultimately doing whatever is necessary for the girls to have the opportunity for their chance to compete. But don’t expect the larger festivals of yore. Elizabeth explained that even though this is the 75th anniversary, and South Dakota Snow Queens had plans to go bigger than ever before, “It’s not about what we want, it’s about providing these contestants a fun weekend, scholarship, and hopefully a bit of travel next year.”

That means scaling back, and possibly even broadcasting the coronation via livestream instead of hosting spectators in person. Of course, SDSQ would love to have a live, in-person audience, and so far, that’s still the plan. The livestream would be a backup option. Elizabeth said, “If this year has taught us anything, it’s that things can change quickly, and we need to be prepared for whatever January brings.” As for precautions, the Snow Queen Committee is continuing to work on it. “We have cute snowflake face masks for the contestants, and we have more rooms rented to space them out. We are still working on the logistics of group activities,” Elizabeth said.

Elizabeth credits Snow Queen’s longevity to the hard work and passion volunteers have put into the scholarship program over the years. “There is a strong belief in opportunity for each contestant to succeed,” she said. When the new South Dakota Snow Queens are crowned in early 2021, they will have a long legacy steeped in tradition to uphold. But they’ll be able to do it because in every woman there is a queen.

photos by Bremer Photography and outfits by Lily’s, Mainstream Boutique, Skal Moon and The Fuze

For more updates on the upcoming SDSQF, or to become a sponsor, contact Elizabeth at [email protected], or visit The Official South Dakota Snow Queen Festival on Facebook.

An Audience with the Queen 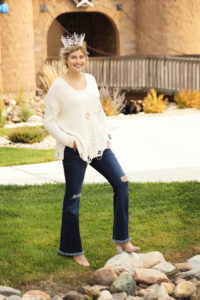 Q:What has been your favorite part about being Snow Queen?

A:My favorite part about being Snow Queen has been being able to interact with kids of all different ages from different backgrounds. It has been really rewarding to see their faces light up when we ask to take a picture or just simply take the time to talk to them and get to know them.

Q:Do you remember what you felt when the MC called your name as the winner?

A: When the MC announced my name, I was a little bit shocked. I wasn’t expecting him to call my name. I just remember the girls around me congratulating me and being extremely happy for me, and I think that was what I will remember the most. To see these girls that I had just met a few days prior show so much joy and support was an amazing feeling. From that moment on, the entire night was overwhelming, to say the least, but in a good way. My friends, family, and community showed so much love and support, and it made me feel so lucky to have such great people around me.

Q: Other than winning, what was the most memorable part of the festival for you?

A: One of the best parts of the entire weekend would have to be meeting so many phenomenal girls and creating lasting friendships. I can honestly say that I met some of my best friends at the state Snow Queen Festival, and I will forever be thankful for that. Our group of 30 girls became so close to one another in such a short amount of time, and that is something so special.

Q:How did you prepare for the festival?

A:I honestly didn’t think so much about preparing for the festival. I went into the weekend focused on being myself and creating new friendships. In all honesty, winning was not my first priority. Representing my community and my family well was at the top of my list, and after that, I wanted to stay true to myself and make new friends.

Q: Do you have any advice for future contestants?

A: My advice for future contestants is to not focus so much on winning but focus on creating the best experience. You only get to participate in something like this once, so take advantage of this opportunity to make your families and communities proud and to meet some great people, not just the girls there, but also the chaperones, the previous queens, and everyone giving up their personal time to make the experience great for you. I believe that making the most of your experience is what you should strive for, and if you do that, then you’ve already won.