Art & Culture | People
For the Wild Ones
Meet an Aberdeen couple who has turned their love for creativity and connecting with others into a photography studio that celebrates seniors.
By Jenny Roth | May/June 2021 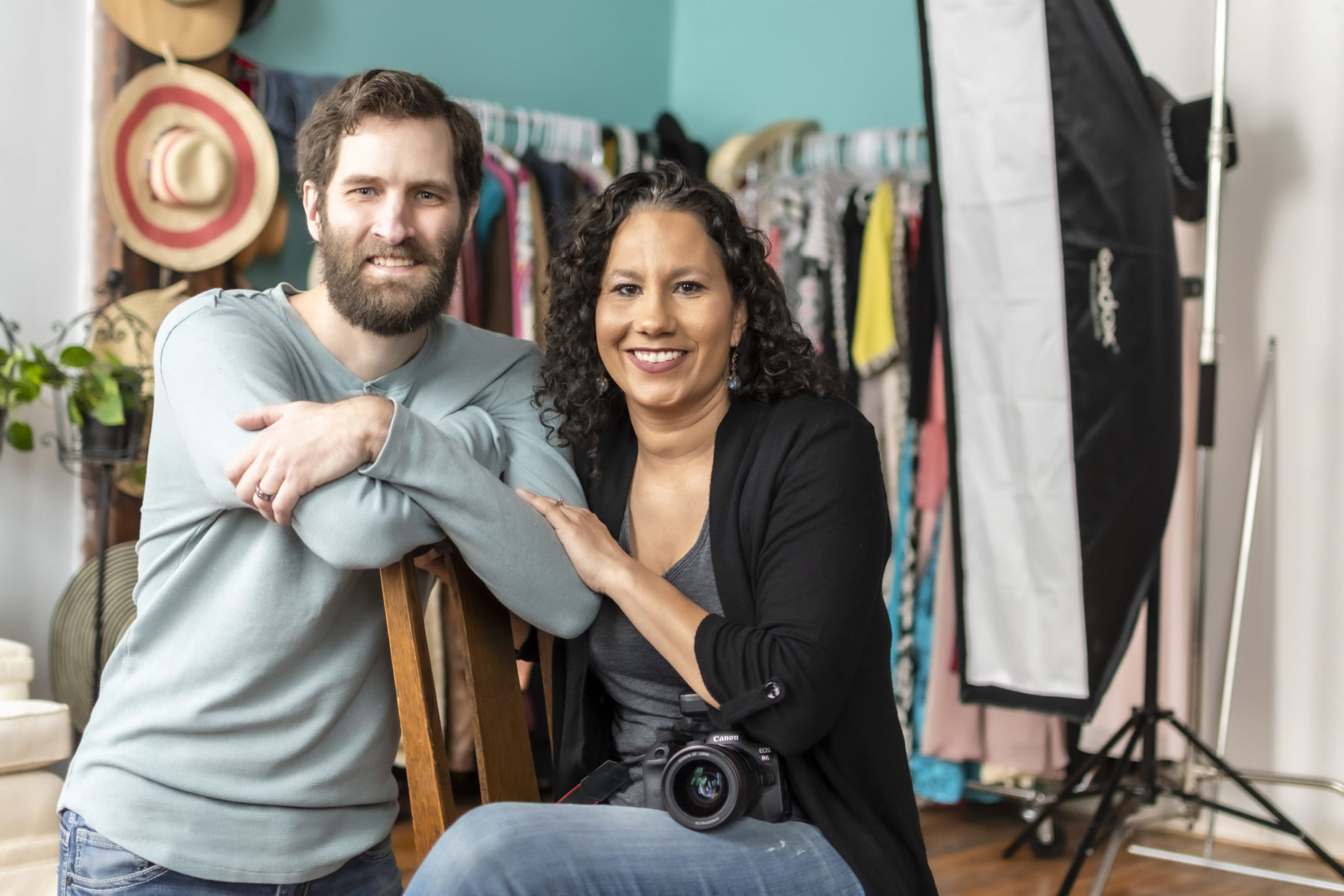 Jerome and Alethiea Wild own Wildfire Studios, a senior and family photography business.

It’s a snowy March morning,  the time of year Midwest photographers would classify as “the slow season.” The weather won’t be ideal for outdoor shoots for at least another month or two, and studio portraits tend to slow down after the holidays.

So, what are photographers Alethiea and Jerome Wild up to on a day like this?

Building a custom, comic-book-themed backdrop for one of their senior clients, naturally.

Alethiea is full of light as she talks about surprising this senior with the backdrop.“I cannot wait for her to see this! She’s not going to believe it!”

If you hear senior pictures and automatically think of stuffy, rigid headshots with forced smiles, you haven’t met the Wilds.

“We really love to explore the creative side of photography along with the traditional,” Jerome explained. “Our seniors will get that classic yearbook photo, but we also mix in some fun, custom elements for that particular student.”

The creative elements that can happen in a shoot with the Wilds will be unique to each senior and their family and what they hope to get out of their photos. They’ve used everything from instruments to vintage props to a 1965 corvette stingray to give their pictures that extra something that has people looking twice.

The couple treats the seniors they work with like family. It’s not “just another typical senior photo shoot.” They genuinely celebrate each wildly unique individual they get to photograph and do everything they can to make senior pictures a highlight for every student.

Alethiea said, “It’s amazing to take something as serious as graduation — this huge, important milestone, and come alongside these kids to laugh and joke and enjoy the experience of it all. It’s one of the biggest moments in their lives, and we love working with these kids and making it special for them.”

The Wilds officially launched their photography business, Wildfire Studios, in Aberdeen a couple of years ago, but Alethiea and Jerome have been behind the lens for much longer.

Jerome grew up in a family of photographers and picked up a camera at an early age. “My father and grandfather both took photos constantly. At every summer vacation or family outing, they were always taking photos. By the time I was around 9 or 10, I started doing the same thing,” he said. Photography has been a hobby for him off and on ever since.

As Alethiea explained, she transitioned from sports parent to photographer rather unexpectedly. “I was always at my kids’ sporting events trying to get pictures of them in action. Then when I met Jerome, he took me under his wing and taught me everything about taking photos.”

One day while the couple was on the sidelines photographing their son’s soccer match, another parent asked if they did senior pictures.

While they hadn’t done this before, the project felt like a natural fit.

“We sit down with our seniors before every shoot and have coffee with them. We find out what they like, what they’re looking for in their photos, and what their parents are hoping for too. It’s about really taking the time to get to know them and building a relationship,” Alethiea said.

Soon after their first senior photoshoot, a family friend came to the Wilds because, like every mom, she wanted senior pictures of her son. The only problem? He wasn’t too thrilled with the idea of spending an afternoon getting his photo taken.

“He told us, ‘I am really reluctant to do this, but I want to do it for my mom, so I guess if you guys take them, I’ll do it,’” Jerome recalled. He ended up loving his photos and having a lot of fun surprising his mom with the finished album too.

After that shoot and seeing how much these photos matter to kids and families, the Wilds knew they were just getting started.

Jerome is quick to give most of the credit to Alethiea. “Her style is so fun and not the traditional thing I think kids are expecting when they think of photoshoots. We do photograph a lot of young men, and I think that’s because Alethiea takes the time to meet them before each shoot. That way, they know going into it that it’s going to be a memorable experience and in the end, they’ll get the photos they want and that their parents are happy with too.”

When Jerome stepped away from this interview to pour his wife another cup of coffee, she didn’t waste any time making sure he didn’t get away with making this story all about her. “Without Jerome, this business would not be here. We work together on everything. Both of us shoot, both of us do the editing. I’m truly the luckiest girl in the world to have a great partner and business partner in him.”

This winter, the Wilds were excited to open their first studio. Located on the second floor of the Briscoe Building, the space gives them even more freedom for creative expression in their shoots. Hence, the custom backdrops being made with individual seniors and families in mind.

Another milestone for the Wilds has been seeing their senior photography featured in publications like Senior Muse Magazine.

“You put your work out there, but it’s always a little scary because you’re never really sure how people are going to see it. So having it featured in a print publication like that is always so exciting for us,” Alethiea said.

Seniors in Aberdeen would agree they’re glad the Wilds are putting their talents out into the world. // –Jenny Roth

Alethiea and Jerome specialize in senior photoshoots that embrace creativity and each unique individual, going beyond the traditional headshot. Photos by Wildfire Studios.