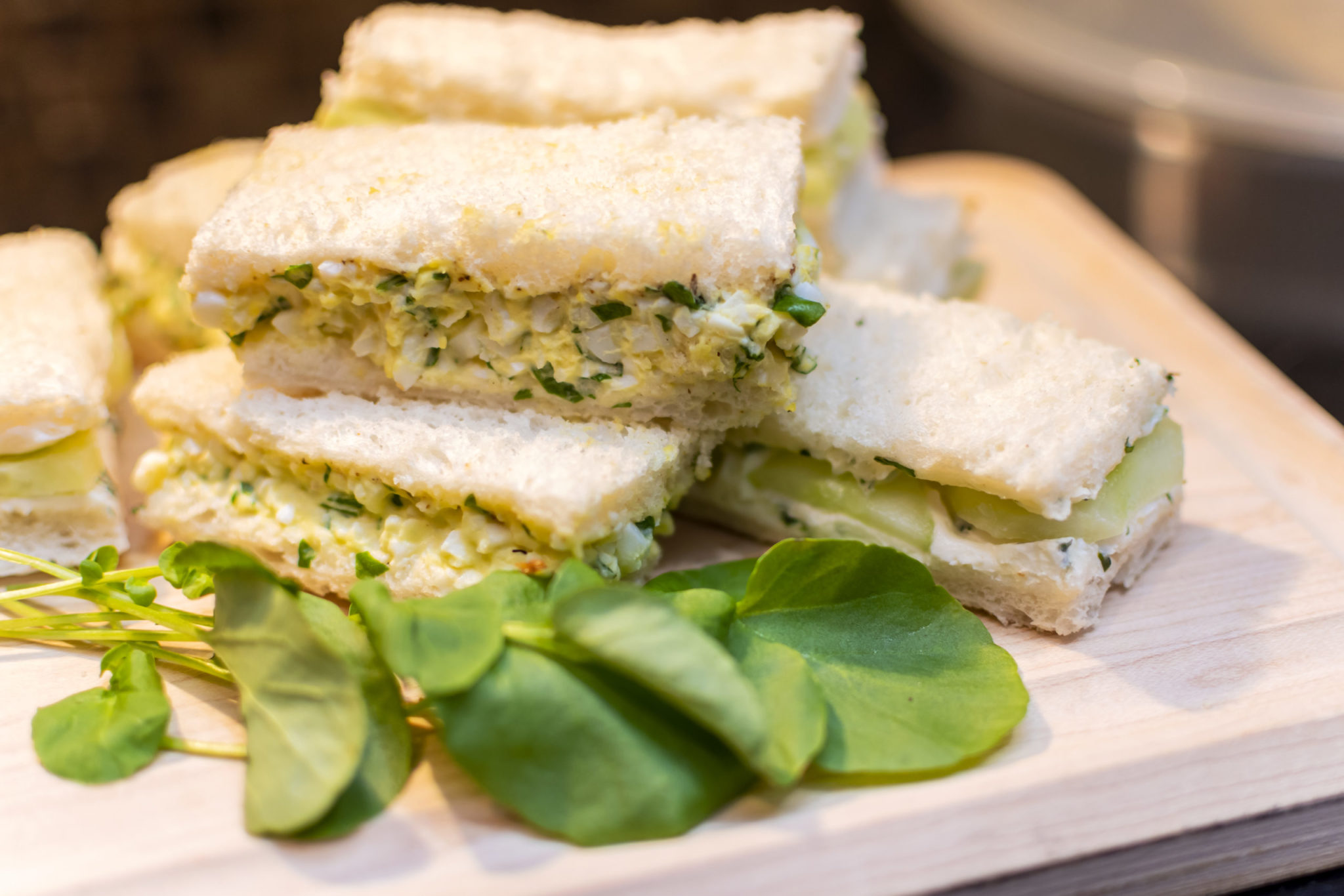 It’s hot, and it’s going to be hot for many more weeks. We wanted to offer up some very easy ideas (they are barely recipes) for light snacks and refreshing beverages to make on a weekend day or for a small gathering of friends. I’ve been making sandwiches like these for years, and you can find all sorts of complicated versions online. Stick to simple, unless you want to experiment and add your own spin.

I’ve provided no quantities because it’s so easy. Make as many sandwiches as you like. Let the cream cheese warm up a bit then smash it with a fork multiple times so you can spread it more easily on the delicate Cottage bread. Coat both sides (some do butter on one piece, cream cheese on the other), pull apart the dill, and sprinkle the leaves all over the cream cheese. Slice the cucumber into half-centimeter cross-sections and lay on one piece of the bread. You can overlap if you like, but it will be harder to cut. I just laid them edge to edge. Salt the cucumbers then add the other piece of bread. Cut the crusts off and slice into three “fingers.” Serve chilled so they are cool and refreshing.

This is not a complicated egg salad. Smash up the eggs in a bowl, or chop with a knife so you have an even texture. Mix in the mayonnaise. Rip a handful of greens off the top of your watercress bunch, chop it up fine and add it to the eggs in stages. You don’t want to turn it into a watercress salad so add just enough to have the green dispersed evenly. Lightly butter four pieces of bread, spread the egg mixture evenly over two of the pieces, salt with celery salt, then add the other pieces of bread, completing the sandwiches. Cut off the crusts and cut into three “fingers.” I find it best to lightly “saw” through the top layer of bread then press through to the bottom piece. If you’re not careful, you’ll just smash the sandwich, which isn’t classy. 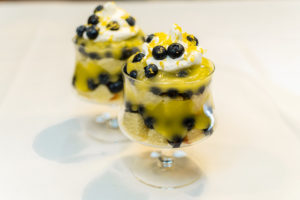 These are really fancy, but so quick and simple to make. Make the pudding according to box instructions. Make whipped cream from scratch or cheat and use a spray can. Cube up thawed pound cake into half-inch squares. Add sugar to your blueberries if they need more sweetness (mix them in a bowl every couple minutes). Find a fancy glass or a clear Solo cup, start with a layer of pound cake, add a few blueberries, scoop on some pudding, add a thin layer of whipped cream, then repeat the layers again, ending with a dollop of whipped cream garnished with more blueberries. That’s it! Fancy and really light and delicious. We added lemon zest in our photo, to be even fancier.

Begin by making a simple syrup with the sugar and one cup of water in a saucepan. Bring to a boil. When the sugar dissolves, add the lavender. Let it steep for about a half hour. In another pan, or an electric kettle, bring two cups of water to a boil then toss in the tea bags. Kill the heat and let the tea steep for a half hour as well. Squeeze your lemon. After everything has cooled a bit, combine the lavender syrup (strained), tea, and lemon juice into a two-quart container. Top off with six cups of water. Chill, then serve over ice. This has just a hint of lavender flavor (feel free to add more, but it can be overpowering) and a bit of sweetness. 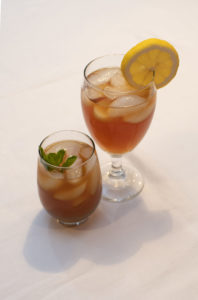 You have to be a Gin drinker to appreciate this as it is a bit “sharp” or bitter. Bring the water to a boil in a pan and toss in the tea bags. Let it steep for 15 minutes. Squeeze your limes in the meantime. Let the tea cool completely. In a pretty pitcher, combine the Gin, tea, and lime juice. Mix it up and chill. Pour into cocktail glasses filled with a generous amount of ice. The drink is meant to be diluted with the melting ice. Garnish with mint and serve. If it’s too bitter for anyone, add an ounce (or more) of simple syrup to sweeten. //