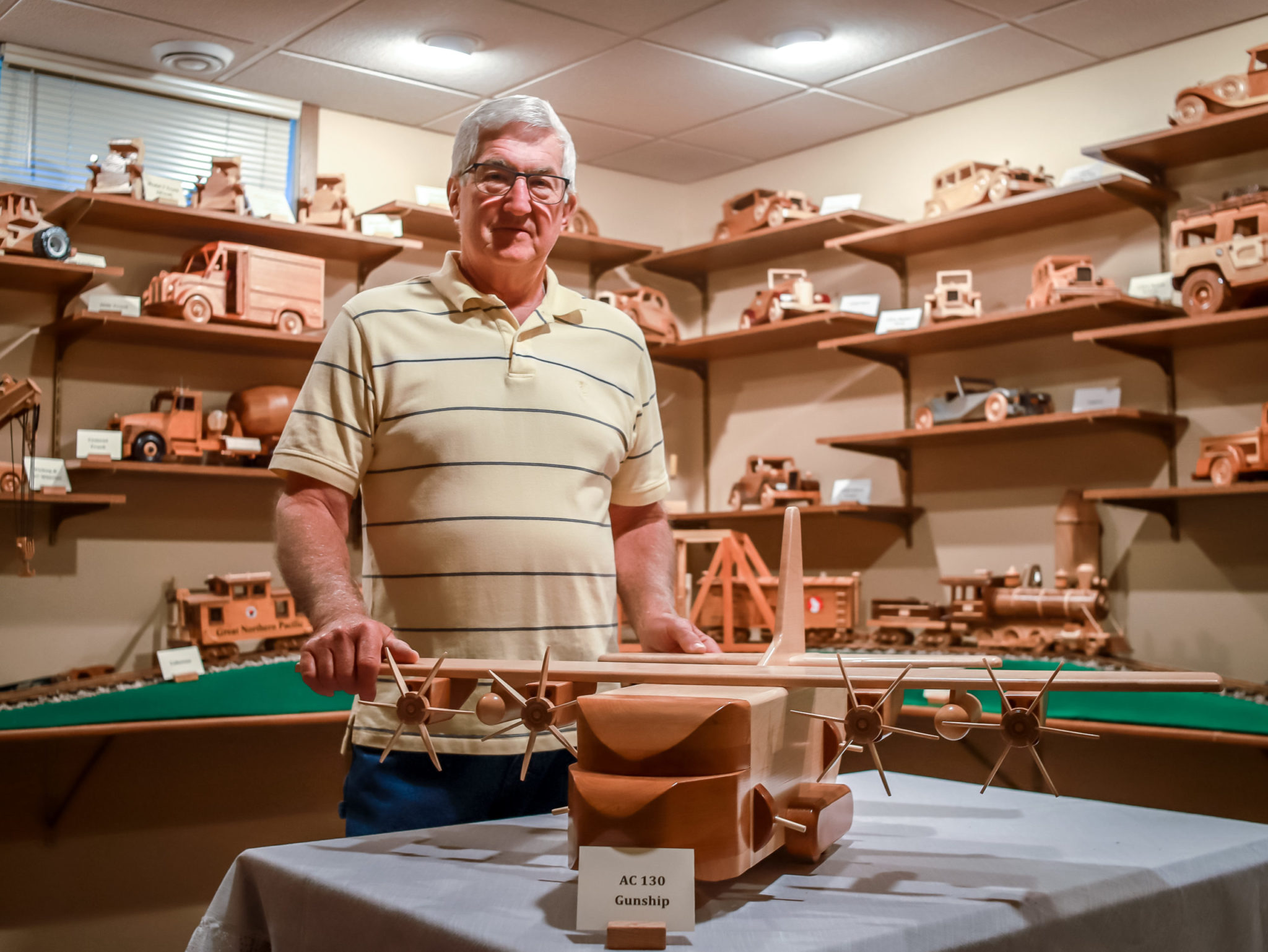 Ron Lyren has an entire room in his house filled with the various wooden toys he has made since he started his hobby. The AC 130 Gunship is the centerpiece of this display, and it even opens to reveal more detail on the interior of the model.

Creating art and mastering a craft comes in various shapes and sizes. Some people turn their skills into a full-time job. Others are dedicated hobbyists. Ron Lyren’s passion for woodworking falls under the latter.

Ron was born in Aberdeen and grew up on a farm east of Turton. His first job was with Dutenhoffer Construction in Aberdeen, but his work was interrupted when he went to serve in the Vietnam War. In 1970, after his service, Ron returned to his wife, Joanne, who worked for the government in Aberdeen. The married couple decided to stay in Aberdeen, and Ron continued to work construction with a local contractor for 34 years. Now, he helps with maintenance at First United Methodist Church and enjoys fishing and hunting. Ron’s lifestyle illustrates his strong work ethic and aligns with his passion for woodworking and crafting wooden toys.

Inspiration to try a new hobby was simple for Ron: it would give him something to do. So, over 15 years ago, the craftsman decided to learn how to build wooden toys.

Since then, he has built himself a vast collection of wooden toys, from an AC 130 Gunship to Noah’s Ark to a WWII Jeep, to name a few.

The wooden toys are displayed all throughout the house. Ron has trucks, cars, boats, planes, and trains neatly placed on cabinet shelves and countertops. One room in the basement houses dozens of wooden toys, including an assortment of larger, more complex designs as well as simpler pieces attached with memories or stories.

While the finished products look great on the shelves, Ron made sure the wooden designs could also function as toys. All parts that would move on real-life equipment and vehicles can also move on the toy. The most common moving piece that Ron previously bought but now carves himself is the wheels on all the vehicles.

As time went on and Ron dove further into his craft, other details were fine-tuned and strayed from the original blueprint. Some of the vehicles contain side mirrors special-ordered from the House of Glass in Aberdeen. Granite pieces given to him by Lien Construction lay along the railroad track as well, and even real pieces of coal sit in the train car.

Creating wooden toys gave Ron an outlet to work with his hands and turn a broad concept into a physical piece of art. One of the most enjoyable parts of making wooden toys was giving them to his grandchildren when they were younger.

Within the last eight years, Ron has expanded his craft to include intarsia.

Intarsia is a form of wood inlaying. Ron selects the right type of wood, shapes it, and places the pieces together to form an image. Imagine putting a puzzle together, except you have to create the pieces yourself from scratch. The patience and precision that Ron possesses is unquestionable, and the finished pieces are beyond exceptional.

The hobbyist’s collection contains over 100 intarsia art pieces. Ron has entered some of his wooden toys and intarsia in competitions and has even received awards at the state fair. One of his favorite intarsia projects is The Last Supper, which he once displayed at his church for Easter. Some other pieces were given away or donated at events and fundraisers. The pheasants that Ron builds even found homes in Minnesota, Idaho, and Texas.

Ron is best known as an artisan because of his intarsia, but he very rarely sells anything he makes. “How do you put a price on it?” Ron said. His purpose for creating wooden toys, and eventually intarsia, was to pick up a hobby that enables him to build creatively. Calculating the costs of time and materials to come up with a price would take the fun out of the process, he explained.

The process of Ron’s woodworking that he refers to is as interesting as his finished products.

The Lyrens’ garage has been arranged to accommodate to Ron’s hobby. He has a workbench to lay out his blueprints that he purchases or finds online, to assemble the intricate elements of his toys, and to piece together the various wooden parts for the intarsia. Boards and scraps of wood are organized by type throughout the garage. The wood Ron uses comes from the lumber yard, scraps from cabinets from a contractor friend, and family members. There are even times Ron has to order wood online because he cannot find it locally.

He said the biggest challenge he faces is trying to determine what wood he should use. Each wood brings out a specific color that adds to the complexity and beauty of his work, especially when making intarsia. Paint is seldom used in any of his designs with the exception of green and dark blue.

Once he has a finished product, Ron takes the wooden toys and intarsia to a friend who applies a clear coat, bringing out the subtle colors and texture of the wood. To adapt to this change in color, Ron keeps clear-coated scraps from every type of wood he has used to visualize the color of his designs.

The most satisfying part for Ron is seeing his toys and wood inlay after spending countless hours perfecting the details. Anyone who has had the opportunity to see some of Ron’s work on display will recognize that Ron’s craftsmanship is more than just a hobby. The hours of dedicated precision and the mastered skill is evident in the minute details found throughout Ron’s vast collection. //