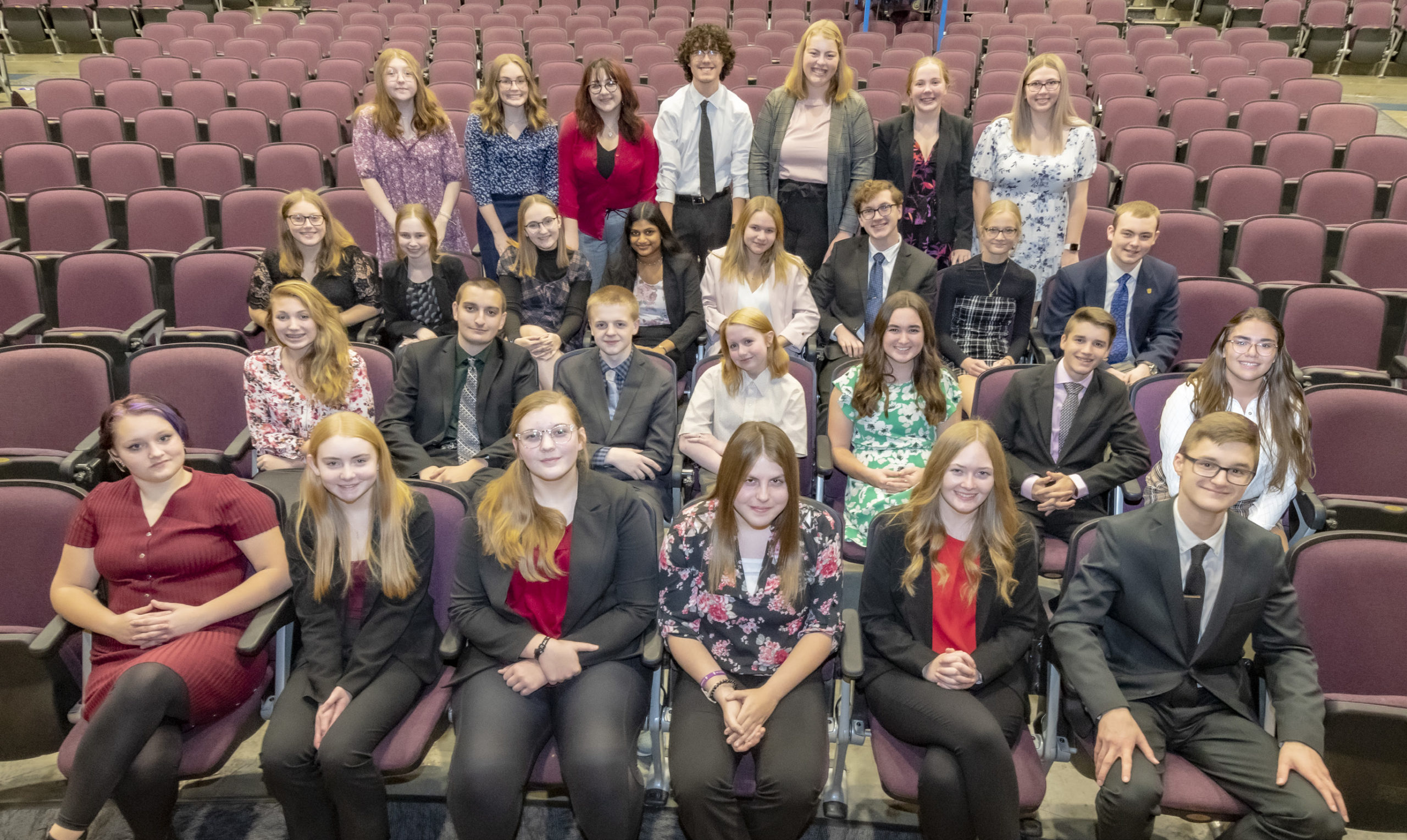 It may surprise you to learn that one high school activity program in Aberdeen has won as many state championships in the 21st century through the 2020-21 school year as the combined state championships of all boys’ high school sports teams in Aberdeen in the same period—and the same goes for all girls’ sports, who have won the same number as boys. It may not surprise you that such a successful program has the second largest budget of all activities in its school. Maybe it will surprise you that this dominant activity is Central High School’s debate program.

Central has also gained national recognition. Entering its 2021-22 season, the team was ranked 10th in the nation by the National Speech and Debate Association.

CHS Principal Jason Uttermark credits that to “a culture of success in the program. Our students expect to do well. The students realize success does not come easy. The participants are very dedicated and put in countless hours in preparation.”

It’s not just about competitive success, and Kerry, who, despite only having some speech but no debate experience, was hired in 2008 fresh out of college on a plan that he would assume head coaching after a year, is plenty competitive. In his job interview, he guaranteed a state championship by his third year as head coach.

Debaters also realize personal and social benefits. “The program develops self-confidence and empowers them to advocate for ideals and issues that are important to them,” Kerry asserted.

Current senior debater Hanna Anderson added, “Debate has unlocked so many doors that I didn’t even know were there.”

The Central debate program started in 1912 and has qualified about 120 students for state tournaments and 230 for national tournaments. In 1931, two students were the first to qualify for nationals. The first state finalists came in 1934 when two two-person teams finished as runners-up in policy debate and one placed third in extemporaneous speaking. The first of 39 individual state championships was earned in 1954.

Central’s dominance was well-timed. Before 2000, team state championships weren’t awarded. “Policy debate titles were the bragging rights back then,” Kerry explained, and Central had a few of those over the years too.

Not surprisingly, Jason Uttermark beamed, “The program is a source of pride for everyone at Central High School.”

Kerry explained, “Individual events are speech-based events where the speaker is trying to persuade or inform the audience” and is judged against other speakers. Debate pits individuals or teams of two against each other, and it “requires critical thinking because you need to be able to respond to each argument made with evidence that has been found prior and/or analytic reasons,” Kerry said. “Lincoln-Douglas and Public Forum are the primary focus.”

Public Forum has a special demand. “We have to prepare both sides of the resolution and will debate both sides at a tournament,” Kerry said. Which side debaters are on is decided by a coin flip. “Brainstorming different possible arguments and having a response for them is critical,” Kerry said.

Central is one of few schools in the state to offer a debate class, which meets the state speech curriculum requirement and focuses on writing arguments and public speaking. After school, debaters conduct research, fine tune arguments, and run practice debates from October to March, Mondays through Thursdays.

Fridays are when their two-day tournaments start. The regular season begins in November and ends with the state tournament in March. They compete in 12 tournaments around the state, including Aberdeen. Students might present up to 10 times in a weekend.

In recent years, the team has included about 35 students, freshmen through seniors, who travel to meets. In 14 years, Kerry has coached about 170 students, including occasional Roncalli students. He said he looks for “debaters who care and willing to put in the work.” It seems to be paying off.

For the state tournament, each school can take only two entries per event—which still means hundreds of students from more than 20 schools may participate. In the past two years, the state and national tournaments have been online, including in March 2021, when Central hosted state via Zoom. Kerry brought back 75 former debaters as judges. Central won, marking its ninth title in the past ten years.

Alexis Doerr, a Northern State University art instructor who won third place at state in original oratory in 2012 and qualified for nationals, remembers making it to state quarterfinals in 2010 in Public Forum. She and her partner “were only sophomores and making it that far into the tournament is unforgettable,” she said. “We couldn’t believe it at the time, but we were so proud of ourselves and all our hard work we put into practicing and preparing.”

Great Plains Bank Operations Officer Joe Mehlhaff said, “My favorite memory was winning the state championship in Lincoln-Douglas debate during my first year of competition, and then winning the championship again my second and final year.” Joe won in 2012 and 2013, and he credits his accelerated success to the coaching staff at Central.

“While at the national tournament, I made friends with other students who were among the most accomplished students and speakers I had ever met,” said attorney and City Council member Rob Ronayne, a 1979 national qualifier in Student Congress. He later saw some of them in law school and moot court competitions.

Besides his first state championship (and all the others), Kerry identifies several highlights from his 14 years of coaching. Maybe the most significant came at the national tournament in Dallas in 2011, when he realized they could compete at the national level.

“Josh Matushin was giving a speech about pet seat belts,” he said. “I remember thinking we can compete and win.” A year later, Hannah Brenden placed sixth nationally in Expository Speaking (a supplemental event offered at nationals) with a speech on backyard chickens.

Some other individual accomplishments also jump out. In 2018, Maggie Fouberg won in Original Oratory and Domestic Extemp, the first student in state history to win two individual speaking events at a state tournament. Two years later, Mariah William was named runner-up for the national Student of the Year Award.

Like any good coach, Kerry can point to long-term benefits his program offers students besides competition accolades. “For college they have developed their research, writing, and speaking skills,” he said, “so that most classes that focus on those areas are not overly challenging.” From a civics perspective, students “are actively engaged in current events and the political issues facing our country, state, and community and can contribute to the discussion because they are some of the most informed individuals.”

Former debaters agree. “The critical thinking one must learn in debate is certainly a skill that I utilize daily in the practice of law and other aspects of daily living,” Rob Ronayne said. “In law school and into adulthood I have felt very little anxiety while speaking publicly, whether it is a jury of a dozen people or hundreds in an auditorium.”

Kerry summed it up, “Presentations don’t rattle them. It is just another speech.”

Current debaters share the appreciation. “[Debate] has taught me how to research effectively, write papers efficiently, speak confidently in public, and the importance of understanding current events to be an educated member of society,” senior Madyson Fleckenstein said.

Fellow senior, Hanna Anderson, agreed but also stressed the social aspect. “While I didn’t originally plan on joining debate, I found myself staying for the community. Truly, debate wouldn’t be nearly as fun as it is without the people you meet during the process,” Hanna said.

Still, that large budget is unexpected for an activity that requires no special equipment. Technically, debate ($82,522) is second to football ($85,260) in the 2021-22 public school budget, according to Finance Director Tom Janish. He added that debate’s long season and many overnight trips, plus several coaches and judges who must be provided and paid for every tournament, add up quickly. Busing costs are budgeted separately, however, and with more out of town events, including transportation would put debate ahead of football in expense. It’s fair to note that equipment is also budgeted separately.

While it may be a surprisingly expensive activity, the proof is in the pudding, and 13 championships in two decades is pretty tasty. //

Big Questions: Assigned a side of the topic before each round. Partners or individuals debate on topics in science, philosophy, and religion.

Lincoln-Douglas Debate: This one-on-one format explores questions of how society ought to be. Students prepare cases and then engage in an exchange of cross-examinations and rebuttals.

Student Congress: Simulating the real U.S. Congress, students compete by proposing bills and resolutions, speaking for and against them, and questioning each other.

Domestic Extemporaneous and Foreign Extemporaneous: Students draw a topic on either domestic (U.S.) or foreign (international) current events, then prepare a seven-minute speech within 30 minutes and present it to judges.

Informative Speaking: Students write and deliver speeches with the intent to inform the audience on a topic of significance.

Oratory: Students write and deliver speeches to inform or persuade the audience on a significant topic in values or policy.

Topics change every two months and are used nationally.

2020-2021 State Tournament: Resolved: On balance, the benefits of urbanization in West Africa outweigh the harms.

November/December 2021: Resolved: A just government ought to recognize an unconditional right of workers to strike. 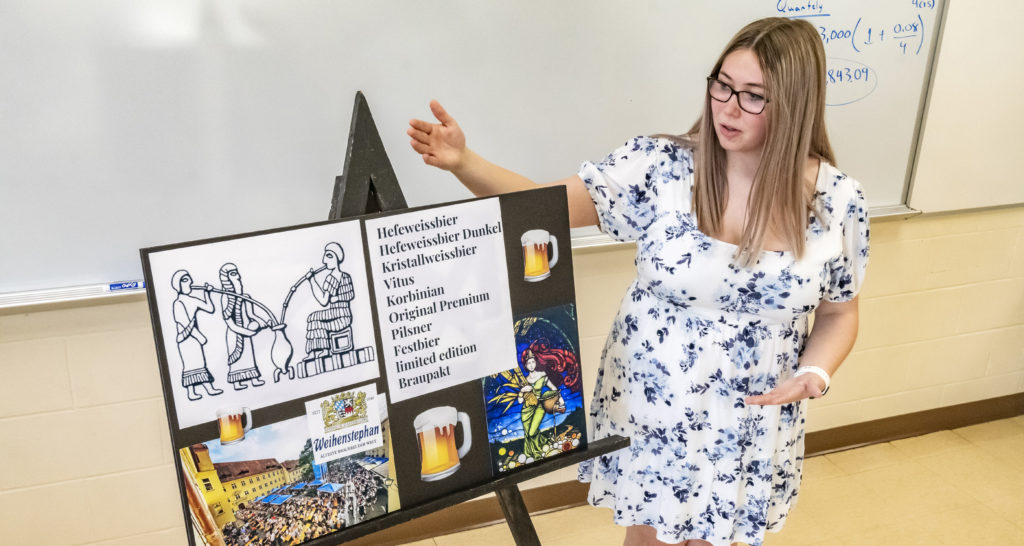 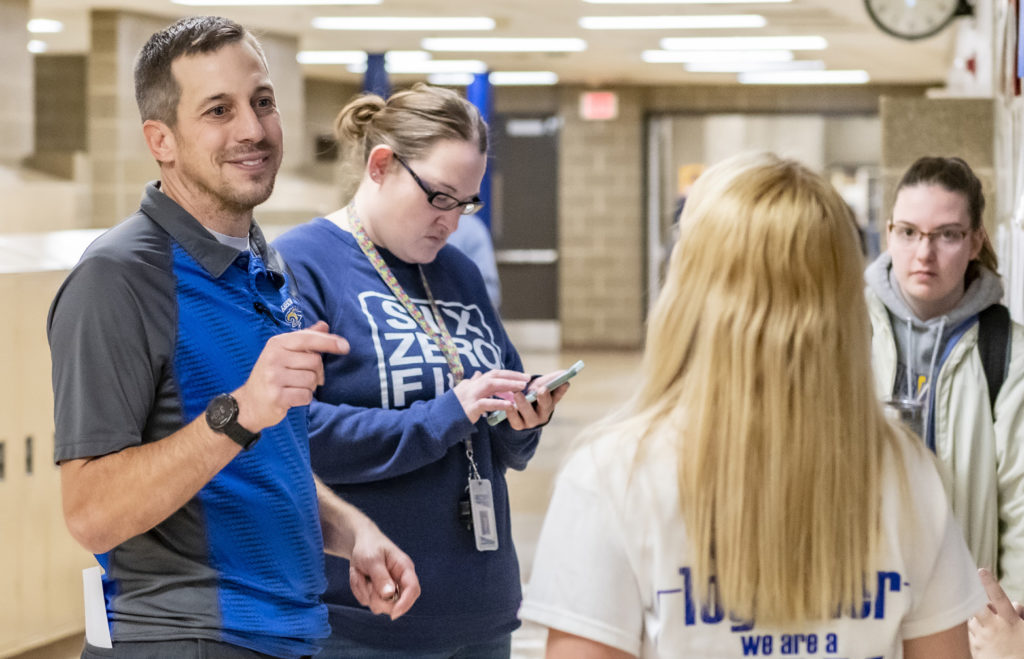 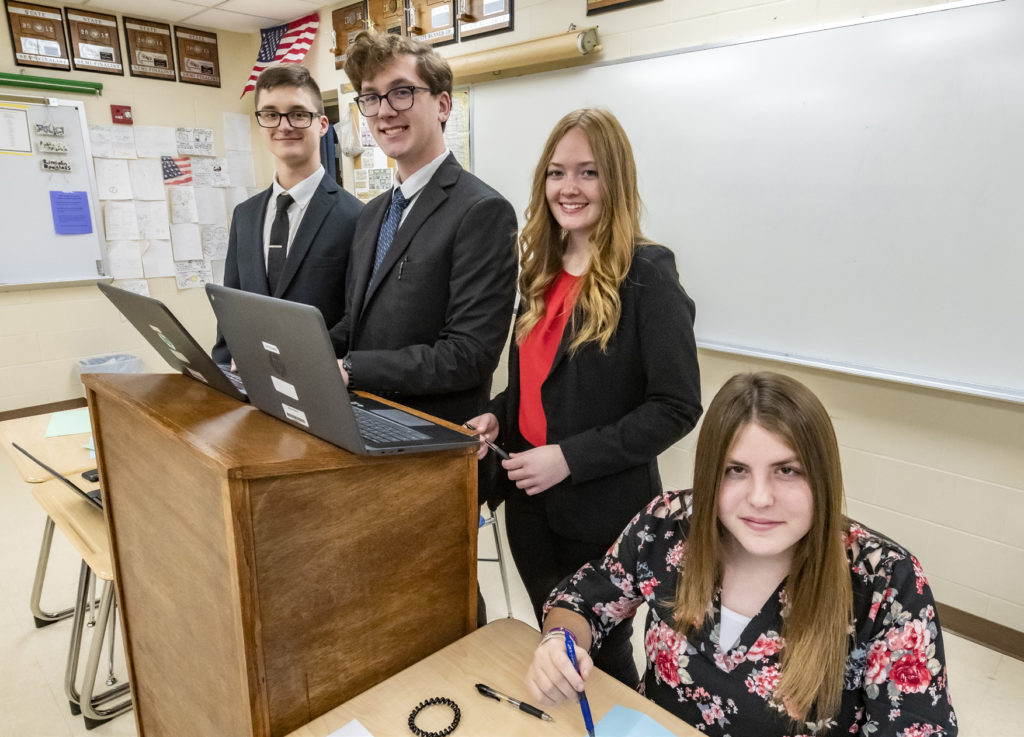 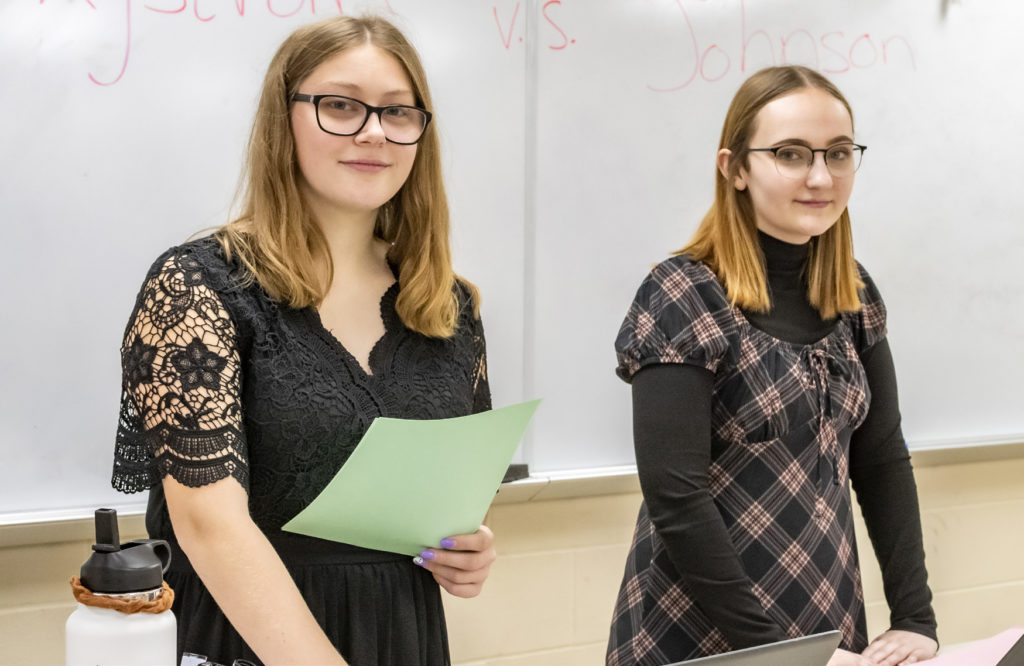 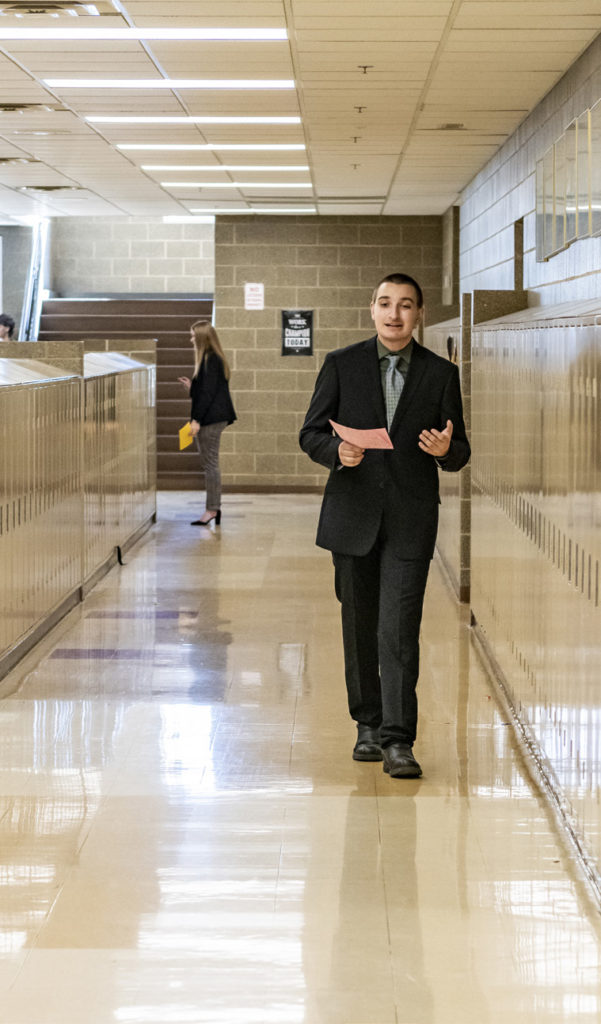 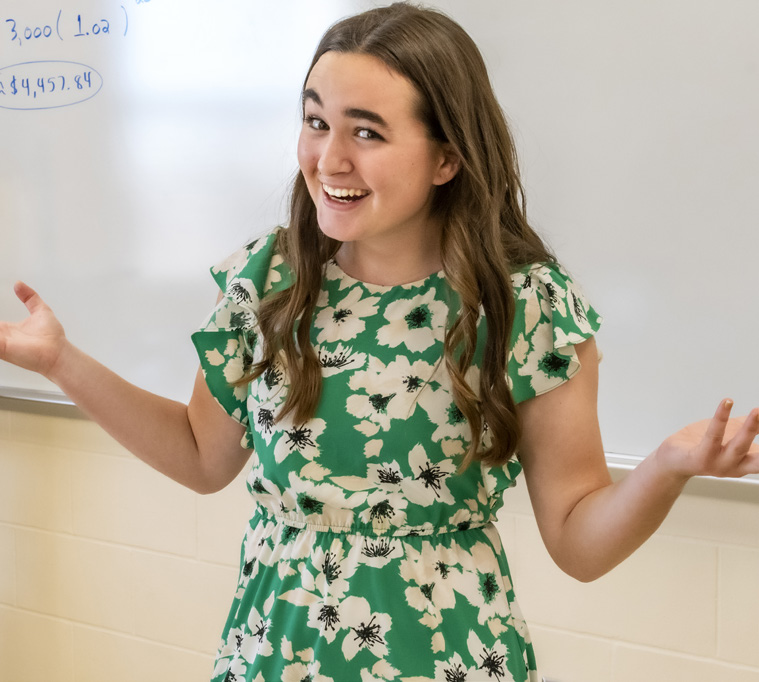 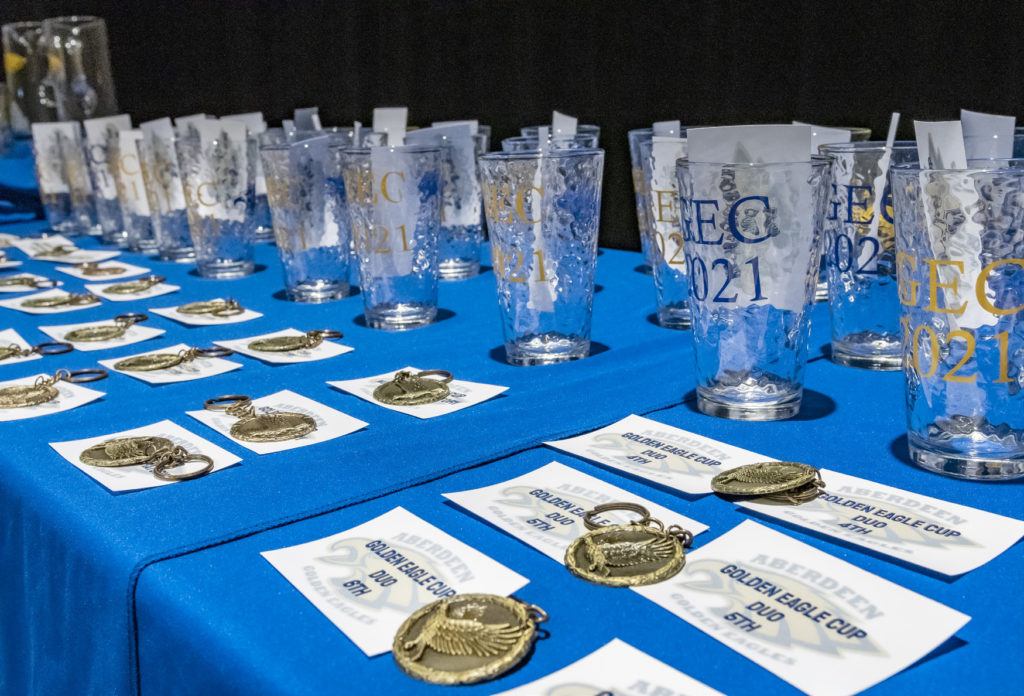 Awards for the Golden Eagle Cup Speech and Debate Tournament