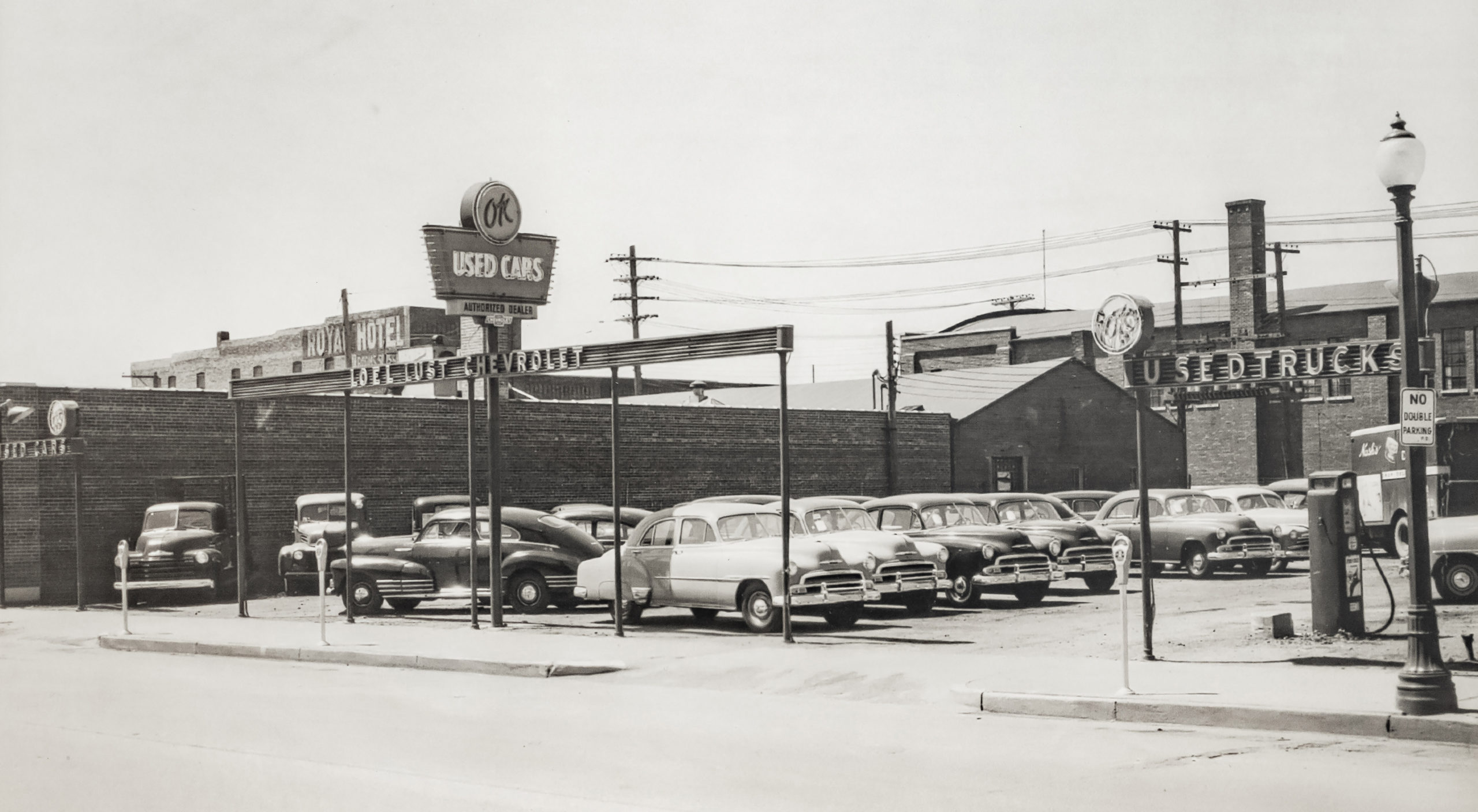 One of the oldest family businesses in Aberdeen might not be around today if the second and third generation owners had followed their original career plans. Neither Jim Lust nor Steven Lust planned to work for the car business they both grew up around, but now the dealership is in its 84th year and third generation of Lust family ownership.

A lot has changed since Loel Lust bought the bankrupt Hub City Chevrolet dealership in Aberdeen in late 1937. As the cliché goes, though, the more things change, the more they stay the same, and Jim suggested, “The problems are the same, but infinitely more complex now.”

Steven sat in his office adjacent to the quiet showroom and referred to his large lots outside with only a handful of new vehicles. Inventory had declined due to a pandemic-induced shortage of microchips vital to auto manufacturing. While new models are coming, he knows that the landscape of the car selling business is changing.

Buying a dealership in the Great Depression was a bold move, and in a 1946 newspaper story, Loel said 1938 (his first full year as owner) was second only to 1932 as the “roughest” year in the auto industry. The business, as was true for many dealerships in early Aberdeen, was first located downtown in what is now the Wells Fargo building at First Street and Second Avenue Northwest. Loel bought the business in partnership with GM and named it Quality Chevrolet Co. In 1942, he bought out GM and renamed it Loel Lust Chevrolet Co.

The Depression gave way to World War II, and the “store” (as both Jim and Steven call the dealership) nearly went bankrupt thanks to General Motors’ shift to manufacturing war machinery, which left few cars to sell. But the store survived, and it expanded to include a used car lot on west Sixth Avenue. In 1957, Loel built a nearly 20,000 square foot building at the new location and moved the dealership there. A newspaper account noted that “since the new location is further from the business area, the company will provide a shuttle service” to take customers back downtown after leaving their cars for service.

A couple years later, Jim got a call from his dad, who had become sick. He asked his son if he could help run the store during his recovery. Fresh out of the Ivy League’s Dartmouth College, Jim recalled that he “had no intention of being in the business. I didn’t plan to stay in Aberdeen.” He had his heart set on graduate school, a Ph.D. in economics, and a college teaching career.

But he did as his father asked and hasn’t looked back. He found that he loved the car business and began to turn the store around. He had to let some people go in the process—people Jim thought had lost interest due to Loel’s illness. Still, he believed, “We mostly parted as friends.” He brought in people who cared about the work, even if they “probably didn’t know much more than I did,” he said.

By 1962, Loel was mostly retired, and Jim was general manager. In 1964, at age 25, Jim became the dealer of record, one of the youngest in the country. He built a 10,000 square foot showroom, opened a used car center, and changed the name to Lust Chevrolet. He also added Buick, Geo, and Mazda to the lines he sold, until Geo was phased out by GM, and Mazda became a Ford product and was sold to another dealership. During his career, he also served as president of both the Aberdeen Area Chamber of Commerce and the National Auto Dealers Association.

In the end, Jim loved the work and his hometown. He remembers his college friends thinking he was crazy to go back to Aberdeen. One of those friends has come to hunt a few times and enjoyed what he experienced. At one point, he admitted to Jim, “We thought you were the dumbest, but you may be the smartest. You’re able to do all the things we’d like to do, but we can’t because we live in cities.”

Early in his career, Jim started gifting stock in the dealership to his seven children, but for a while, no one showed interest in taking over the business. Steven, who’d worked in the kitchen at Moccasin Creek Country Club through high school, intended to run food and beverage for a large resort and graduated from Northern Arizona University. In the end, after not getting a job he was hoping for, he considered business school.

Shades of a few decades earlier, Jim stepped in. He invited Steven to work at the dealership. “He was going to go to business school,” Jim said. “So I told him why don’t you come here, and we’ll teach you business.” Steven started as a service writer, worked in finance and insurance, and served as used car manager and general sales manager.

In time, maybe the genes took over, and Steven started buying shares in the business with an eye for taking over. Jim supported the plan but made it clear it wasn’t going to be a gift job. Steven had to prove himself. “I wasn’t going to put up with mediocrity,” Jim added. As Jim sees it, Steven was in part working for his shareholding siblings, which also made them “cheerleaders” for their brother. Eventually, Steven began buying out his “cheerleaders.”

In 1997, Steven became dealer of record and, on the advice of his father, changed the store’s name to Steven Lust Automotive. The business has grown under Steven’s ownership in both offerings and real estate, as the Lust landscape now covers four city blocks. He built a no-appointment oil change center and two touchless car washes, both of which earned the Aberdeen News People’s Choice Award four years in a row. He added more car lines, including GMC and Cadillac. He also briefly sold Pontiacs, but in a familiar tale, GM shut down the Pontiac line. Maybe it’s not surprising that Steven mentions dealing with the manufacturer as a frustration in his ownership experience—a sour memory Jim shares.

Jim is proud of Steven’s success in a challenging industry. “Our styles are different,” he said, “but our goals are the same.”

Steven stressed the styles part of that equation early in his ownership. Thinking tie-wearing salespeople were off-putting for some customers, Steven stopped requiring ties. “When I told my dad, he didn’t like it,” he said. “We didn’t talk for a while.”

That might have been a joke because Jim remembers it a little differently. “I saw this as Steven testing how involved I was going to be in the business,” Jim said. The retired but still dapper man explained, “I just said that as long as they’re neat, I’m okay with it.” He added that while he has shared his business thoughts with Steven, “It’s always his decision.”

“I’ve learned most of what I know about the business from my dad, and I respect that,” Steven said.

Working at the Car StoreE

Besides family dynamics, employee relations have always been a priority for both Jim and Steven. The business has been blessed with many long-term staff, who receive profit-sharing and loyalty bonuses at the end of the year.

Steven is active in Aberdeen—like his father, he served as Chamber president—and likes his staff to be involved and build relationships with people in the community. “I like to think it’s still a relationship business,” he said.

Beyond the professional benefits, Steven’s perspective is philosophical. Wherever he worked, he said, “I’ve never worked for anyone and don’t want anyone working for me—I’ve worked for myself, my family, and my well-being, and I want to treat people that way.” Ultimately, “I tell my staff you better have fun here and enjoy it because you’re here more than you’re with your family.”

Jim salutes Steven’s treatment of his staff. “The pandemic exposed lots of weakness in dealerships around the country,” he said. “Steven decided it was time to support the employees and protect their jobs. It was a gutsy move.” Despite inventory shortages and not a lot to sell, he still retained all salespeople during the pandemic and during the ongoing chip shortage.

Another aspect of caring for staff is the idea that people “don’t have to retire here,” Jim said. “We find that people identify with their jobs, and when they leave, it can be difficult for them.” So the dealership sometimes finds retirees part-time work, such as driving courtesy vehicles, to help them maintain connections with the store community. Reinforcing this point, Jim, who turned the business over to Steven a quarter century ago, described this policy while sitting at his desk in the retirement office he keeps at the dealership.

Selling Cars in the 21st Century

As is true for many industries, the pandemic has disrupted the car business. In some ways, Steven believes, it may have accelerated changes that were already coming, largely driven by the Internet. “It has changed the business dramatically, changing buying behaviors and patterns,” he explained. “Customers love the simplicity of the Amazon model, and it works for cars too.” It has “changed customer loyalty. It has allowed people to be more private in their buying. They don’t have to come into a showroom. It’s posed a big challenge,” Steven added. Plus, it will require fundamental changes.

“I believe a majority of dealers going forward will work with fewer vehicles on the lot,” he said. Manufacturers will start producing cars and trucks based on data on presold vehicles. More and more people will place an order for a vehicle online, choose the dealership where it will be delivered, and pick it up there. That’s the approach GM is using to sell the all-electric Hummer, which Steven is bringing to Aberdeen. “It used to be that 15 to 20% of vehicles were presold,” he said, “and I expect it to go up to 50 to 60%.”

This will change the role of the dealership. There will be sample models on the lot, but not hundreds of vehicles anymore. “We’ll still be here to educate you on your vehicle and for service,” he said, but in-dealership sales will likely decline.

Another new fact of life is that vehicles are changing. “There will definitely be more electric vehicles in the future, especially as their driving range increases,” Steven said. And he is planning for it. He has built an open-air shed on one of his lots that will hold vehicle chargers available for public use. Jim and Steven agree, however, that the internal combustion engine will be around for many years, particularly in this part of the country.

It hasn’t all been challenges. Steven has many fond memories of the business. Probably not coincidentally for a third-generation owner, his most positive memory is of selling vehicles to second and third generations of customer families. “I love seeing people get excited when they come to get their new vehicles, and I love being able to help people when they have vehicle problems,” he said. Maybe it’s not surprising that the man who trusts that selling cars is still a relationship business believes, especially for something that’s as expensive as new vehicles, that “there’s always going to be a need for a thank you and a smile.”

While the next generation of Lusts hasn’t shown much interest in getting in the business so far, Jim takes great satisfaction from “seeing my dad’s legacy progress and succeed through three generations.” No doubt Loel does, too. //