Sports
Lessons On and Off the Court
PC’s Chelsey Albrecht is the backbone of its volleyball program.
By Dave Vilhauer | September/October 2022 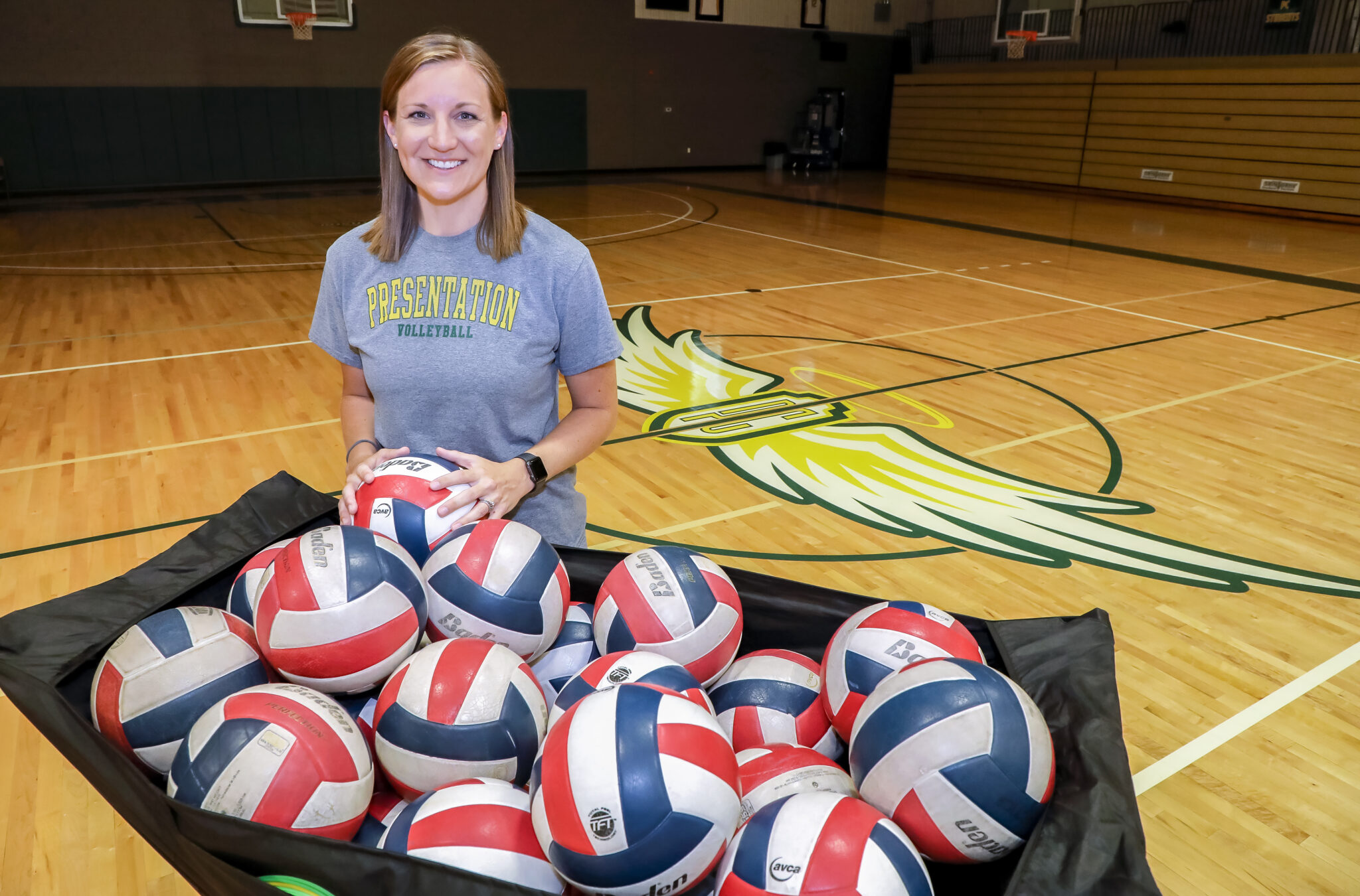 Chelsey Albrecht will never forget where she came from because her volleyball roots are firmly planted in the Hub City.

The Presentation College volleyball coach has been around the sport at every level while growing up.

“I’ve obviously been blessed to do what I love and then to do it in my hometown. It goes back a long way,” Albrecht said. “My mom, Connie Deibert, was a teacher and educator and she coached middle school volleyball and I remember going with her. It’s just kind of been in my blood for a long time.”

Albrecht played at Aberdeen Central before competing for Northern State. She later got her start in coaching as an assistant at NSU before taking over the PC program 15 years ago.

She credits then Northern coach Lisa Schriver for motivating her to try her hand at coaching.

“I honestly never thought about it as a career opportunity,” Albrecht said. “I loved working the camps and I loved coaching in the club that we had, so when she kind of sparked that interest in me to go get my masters was when it really became putting my passion into coaching.”

Soon, Albrecht found herself as the head coach at Presentation, where she was not much older than her players. And there weren’t many of those.

Albrecht said the Saints only had six or seven players in her first season.

“It was just a learning experience for sure,” Albrecht said. “I think back to those days and like, ‘Wow how did we structure practices?’ But it’s always a good reminder to me knowing where this program has gone and grown.” 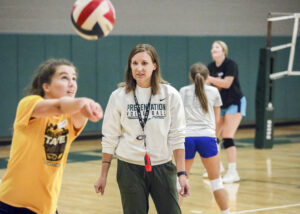 Chelsey has been coaching at Presentation College for 15 years.

There have been many changes in the sport since Albrecht first got involved in volleyball. Her senior year in high school was the last season before the sport switched to rally scoring. There were no camps to attend, no Junior Olympic volleyball.

Recruiting was vastly different than it is today.

“We used to send out VHSs, but it was shot from the rafters of the Civic Arena and you couldn’t really even see what was going on,” Albrecht recalled. “When I first started, they would send CDs, but now it’s all online, so that part has even evolved quite a bit.”

Being a local resident her entire life, Albrecht definitely knows the volleyball landscape. She understands and appreciates the powerhouse programs that lie within miles of Aberdeen like Faulkton, Northwestern, Warner, and others in addition to the three Hub City high schools. It’s a reason why familiar names often dot the PC roster.

“We always like to look within our radius here,” Albrecht said of recruiting strategy. “Obviously, it has to be a good fit for the student-athlete, and they have to want what we have for academic majors and they have to want to play in college, because it is a commitment and there is the dedication piece to it.”

There is no denying Albrecht’s emphasis and appreciation on the classroom part of the equation.

Ask about what moves her needle and Albrecht is quick to bring the conversation back to academics.

“Nothing brings me more joy than graduation day,” she said. “I think that is probably the ultimate success. I think that our players will tell you that. You just get giddy with excitement.”

And when it comes to success, Albrecht tends to measure it a bit differently than what some coaches may do.

“Obviously, you can always measure in the wins and losses,” Albrecht said, “but I think there’s so much more to success than just the end result.”

That is evident in the relationships and bonds that Albrecht has built with her players through the years. She is reminded of that daily when she glances at a board in her office that she explains as the reason she continues to do what she does. 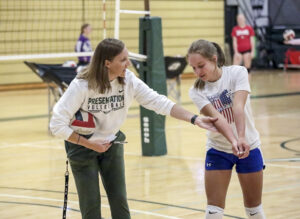 The relationships that form between coach and athlete last long after the season has ended.

Make no mistake, Albrecht would love to win every match that she coaches in. It’s part of what motivates her to bring her best to the gym every time the volleyball cart is rolled out.

“I’d still love to be able to get this program some national recognition. I think that that is an important piece,” Albrecht said. “We play in a really competitive conference, so every year you have to able to grow and improve.”

Still, Albrecht is not about to compromise the importance of education when it comes to recruiting players just to be able to grab a few extra victories.

While there has been plenty of movement in the coaching ranks of other sports on the PC campus in the past decade, Albrecht has been a pillar of stability and consistency at the school. It’s probably because her roots run deep in the community.

It’s another reason why Albrecht will likely have to get a bigger ‘why’ board in her office as she continues to build bonds with her players and impact those who are fortunate enough to be a part of her teams.