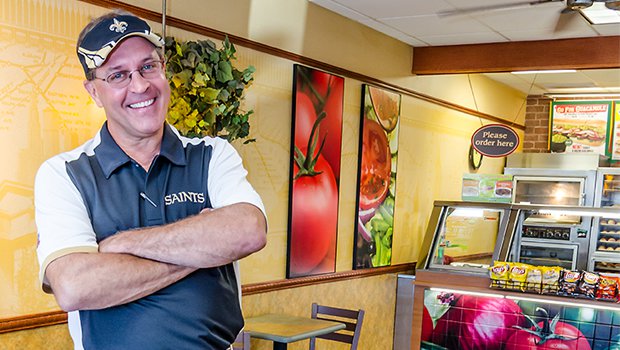 The Subway Man of Aberdeen

Charlie Mehlhaff is a man with a dream. A dream of owning every Subway Franchise in Aberdeen, two in Huron, and also one in Groton, Britton and Mobridge. That dream is currently true.

Charles C. Mehlhaff grew up northeast of town in Eureka. After being accepted to and seriously considering attending the University of Arizona, he realized that he just couldn’t leave the place he grew up.

“So I came to Northern, long story short, with the ambition to study business.” After his first few years of school, Charlie got a golden opportunity to go to Chicago and spend a week with some family friends, one of whom was a CFO of a food company.

“I got to live the life of an executive for a week, and it was just [so] impressive to me. So my Junior and Senior year I really bared down and sunk my teeth into accounting and finance.” Being a franchise man wasn’t Charlie’s first job however. He worked at Northern’s student loan office for 18 months and then at US Bank for six years. He later moved on to selling cars at Harr Motors; and after doing that for a while, Charlie finally decided to go into business for himself.

“When you’re in town from ’75 to ’91, you make a lot of acquaintances.” And with the help of those acquaintances, along with his many years of experience, his miniature sandwich empire began.

Charlie opened his first Subway in 1990 with his brother Stew near Kmart. After that, he expanded to a second location in Huron. Realizing that having one location in all of Aberdeen could be a bit of a pain for customers, they opened a third location in Tiffany Plaza (which was later remodeled and relocated to the Lamont Building on Washington Street), and then another and another, placed in strategic locations all throughout town. Soon there were a lot of them and he owned them all. But having this kind of business model brings its share of difficulties.

One of the most difficult challenges with handling all these franchises is obtaining consistency, as well as effectively training new employees to help maintain that consistency.

“We’re making an extra special effort to train harder, to enable young kids to know what they’re doing and do it well.” Above all, Charlie Mehlhaff believes in Aberdeen’s future, and that his employees are an integral part of that future.

“First jobs are a critical beginning to a lifetime of achievement, nothing makes me more proud than seeing past employees succeed in life.” //