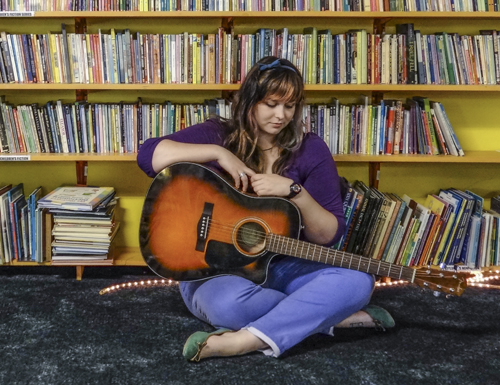 Amanda Conway is a self-taught alternative folk guitarist who uses her melodic voice to convey raw emotion. She writes her own lyrics and music but occasionally enjoys doing a cover song “shout out” to her favorite underground bands. One year ago Amanda was living in Rapid City and feeling a real lack of direction. A friend invited her along on a trip to Aberdeen. She’d never been to Aberdeen before, but had such a positive experience on her trip that she began making plans to relocate. “Aberdeen has so many positive people, free-thinking individuals who support original and genuine art. That’s hard to find anywhere,” says Amanda.

The new friends she met in Aberdeen were quick to support Amanda’s efforts to share her unique musical style. Doors were opened to her at the Red Rooster, Slackers, Music on Main, and Gallery Go. She has performed publicly seven times since moving here last year, all free of charge. She loves to play music, but has a deeper purpose than to simply entertain, using her talent to support the same community that embraced her with open arms. She has performed to rally behind local vendors, fund-raising events, advocacy groups and visual artists.

Amanda first became interested in music in grade school when her parents encouraged her to take up the clarinet. Twelve years ago she traded in her wind instrument for an acoustic guitar and taught herself to play by ear. Her musical influences are highly eclectic, spanning several genres and a variety of artists, from Weird Al Yankovic to Roy Orbison. Amanda is always open to looking beyond the mainstream and incorporating what she finds there into her ever-developing style.

Amanda writes her music and lyrics with purpose. She writes of the need for a changed society, of injustices, and of broken hearts. In addition to her many live performances, she has recorded three albums, distributing over 100 copies of her favorite of the three, titled Milk and Cigarettes. She would like to produce a new album, but money is an issue, especially since she does many of her performances on a donation basis. “I’m used to the poor artist lifestyle,” she says.

Amanda loves the organic sound of live performance and felt this sound was best captured by recording her albums in low-fi. She enjoys using old-school technology, considered by many to be of lesser quality, because she believes that new recording equipment can make the music sound too sterile.

Amanda’s music is poignant and expressive, filled with her own intimate opinions and emotions. She feels all people need an outlet to express emotions openly and without judgment. Through her performances she encourages others to tap into that part of themselves. “If someone at my show doesn’t tear up, I’ve failed,” says Amanda.

“My music talks about positive changes that need to happen in the world,” said Amanda who enrolled at Northern State University this fall, “and that’s awesome, but I realized I needed to take further action to ensure those changes take place.” Amanda is studying business in hopes of one day running her own non-profit, and may go on to attend law school when she is through. She is looking forward to tapping into the art community at NSU as well, seeking opportunities to get to know fellow students and to perform in a new environment.