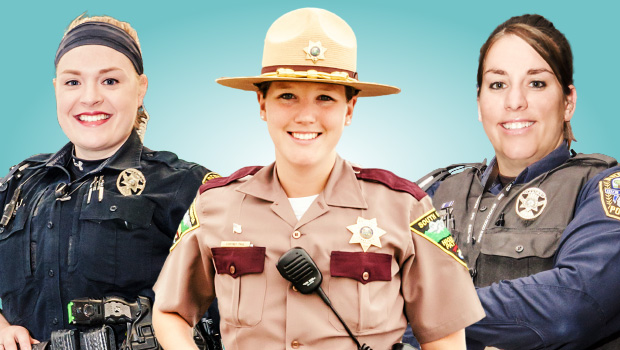 Officers on patrol make up the backbone of law enforcement: maintaining order within the community, fighting crime, and aiding citizens in distress. However, as is the case in many other fields, women had to fight for their right to serve alongside their fellow male officers. In fact, the public didn’t generally accept females serving as active crime fighters until the 1970s. The story of women’s involvement in law enforcement is an ever-evolving one, spanning the length of an entire century. For many years, women served police departments in limited ways until World War II increased the need for positions to be filled. Nowadays, American law enforcement has embraced the various benefits of deploying both male and female officers, utilizing the gifts and talents of a wide range of people. In Aberdeen the story is no different, and three wonderful women were kind enough to take some time out of their hectic schedules to give us a closer look at what it takes to be a woman on the police force. 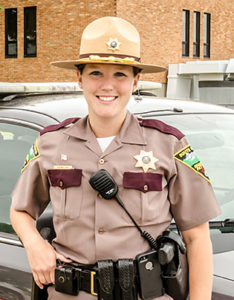 Cortney Paul does it all: at home, she is a wife and an obsessive cooker and baker, but during the day, she is a highway patrol officer, enforcing the laws of the land and keeping Aberdeen’s roads safe. It all started when Cortney began working nights as a dispatcher to pay her way through college at the University of Tennessee. When she moved to Aberdeen and continued work at the Brown County Sheriff’s office, she realized she was meant to do more than simply answer phones all day. So she applied for patrol and has been actively serving the community for two years since.

Cortney’s day starts from the moment she gets in her car in the morning, which to her is one of the best parts of the job. “That way I’m never late,” she laughed. From there, she picks which highways she wants to work and is on the alert from anything from speeding to hazardous moving violations, which include cutting people off, following behind another vehicle too closely, improper lane changes, or any driving behavior that could be perceived as dangerous. This, along with motor carrier enforcement and crashes, are her primary responsibilities.

For Cortney, one of the most rewarding aspects of the job is getting to meet people from all kinds of different places. During different times of year, new people are always passing through on their way to a variety of unique places. At the end of the day, she knows that all the people she stops are just like her. “Obviously writing tickets is not my favorite part of the job,” she said. “These people have usually had a bad day and they made a mistake, and I get that. 99% of the time I’m not dealing with hardcore criminals. I just want to make sure everyone drives safe.”

For the most part, Cortney believes highway patrol is pretty lucky in Aberdeen. “The people in the Aberdeen area do a great job of being responsible, so we usually don’t have to deal with too much.”

But that doesn’t mean the job is without its challenges. Since Cortney is the type of person to give everything she has to the job, balancing her work and home life has been a little difficult. “I still think of myself as a pretty traditional woman, so when I come home I want to cook, clean, and be the housewife. That’s been a pretty big transition for me.”

However, being a woman has never posed any exceptional challenges on the job. Cortney she says she loves her agency because they don’t hold the women to any separate standards than the men. “We have to do everything they do, and then some,” she said. “Women bring a whole different side to law enforcement. I feel like we have great communication skills that we bring to any agency. That’s a major plus. If you listen and learn how to talk to people, odds are you aren’t going to be in too much danger.”

In the future, Cortney hopes to continue to improve community relationships and meet more people. Currently, she is working towards a reconstructionist position, in which she would analyze crashes at a more advanced level than she does currently. 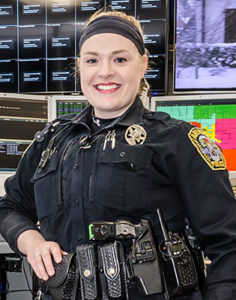 Nicole Foote has been interested in law enforcement since a ripe, early age. Growing up, she knew people who had negative experiences with the law, and from then on became determined to alter common misconception that cops are “bad.” She wanted to be “one of the good guys,” a role model and positive force in the community rather than the reverse.

Originally from Colorado, Nicole has been with the APD since May of 2014 and also works as a DARE officer. Her favorite part of the job is being able to act as a positive role model, especially to the kids in the community.

She admits that the job can be a bit crazy, and oftentimes she never knows what to expect. “One day can be pretty uneventful and the next can be so busy that I’m running from call to call all day.”

Despite the stress the job occasionally brings, she enjoys the challenge of dealing with a wide variety of issues as well as meeting many different people. Although she recognizes that many women within the field are still underestimated even today, she is thankful that she hasn’t experienced much of that during her time as an officer.

To young people aspiring to enter into this field, she encourages, “Go for it!” 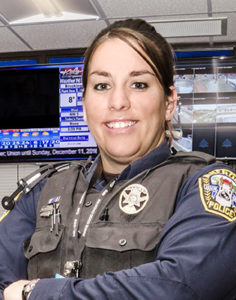 Ever since she was a little girl, Melissa (Mel) Arnold knew she wanted to do something different. Growing up on a farm near Ellendale, North Dakota, she spent much of her time outdoors, and knew from the beginning that she didn’t want a job that would require her to do the same thing day after day. So, after graduating high school, she went to pursue an AAS degree in law enforcement at Alexandria Technical College, as well as a Bachelor’s degree in Criminal Justice and Psychology at Northern State University.

Currently, Mel is serving as the School Resource Officer for the middle schools throughout town and has taught DARE for six years. Her days frequently consist of working with the kids at the elementary and middle schools, letting them know that the police are there when they need them, no matter what. “It’s great to see the young men and women they are becoming,” she said.

But Melissa never would have gotten where she is today without lots and lots of hard work. Since she grew up with five brothers, Mel knew coming into this field that she would have to prove herself. “In order to make it in this field [as a woman], you have to be seen as ‘one of the guys,’” she explained. “There are still some men in this field that aren’t sure we should be doing this job, and don’t want a female supervisor.” Thankfully, though, Mel had an advantage; she rode with the department for three years before she got the job, and received plenty of help and support from other officers. Her gender has never been as issue with her coworkers. “They’re all great, and most of them don’t care if you are male or female. As long as you have their back, they will have yours, and that’s what matters!”

Although her job brings it with it many challenges, Mel believes that the support she receives from the community makes it well worth it, especially in light of recent events across the country. “I didn’t get into this job for people to say I’m doing well,” Mel said. “I did it to be able to help people in their time of need. Knowing that I can help some family find a missing child, keep them away from an abusive person, and be there to answer questions when they need it, makes the days not so bad.”

Mel firmly believes anyone aspiring to be a police officer can do it if they put their mind to it. “Take every opportunity that you can and don’t ever stop learning and wanting to be a better officer,” she said. “Be strong and willing to work hard meet your goals, and you’ll be able to do anything you set your mind to.” // –Becca Simon