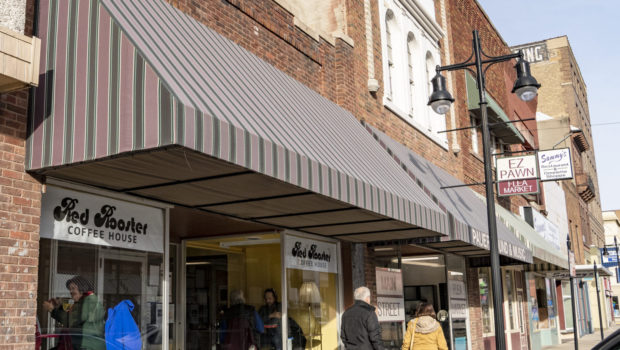 Published on March 1st, 2019 | by AberdeenMagazine

A New Chapter Begins For The Red Rooster

Siblings Dan Cleberg and Kileen Limvere opened the Red Rooster Coffee House in downtown Aberdeen in 1996. Since then their venue has become a staple in our community’s culture, known as much for its art and entertainment events and friendly atmosphere as it is for its cups of Joe.

Last year, Dan and Kileen began looking for a new home for their business and found one at 218 S. Main Street, just a few doors south from their original digs. After closing briefly to move and remodel the new space, the Red Rooster reopened on November 1. A public-supported Go Fund Me account has helped raise money to purchase the building and complete the extensive renovation work for it to be up and running.

The “New Roo” promises to bring back some of its classics, like the stage, bookshelves, and comfy couches. Along with these, they’re also adding some additional features, such as an event room and art gallery. They’re also serving breakfast on Sunday mornings, and sharing a building with the Main Street Flea Market and EZ Pawn Shop. Dan says, “People can come here and grab a coffee or lunch, and then check out the 10 plus vendors at the Flea Market in one stop.” // — Jenny Roth

For information on events and menu specials happening at the Red Rooster Coffee House, go to www.facebook.com/RedRoosterCoffeeHouse or call 605-225-6603.