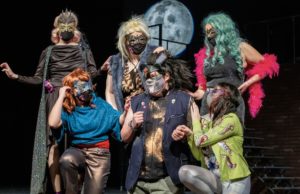 After many closures and cancellations last spring, NSU students are thankful to be back on campus and participating in events, even if it means following social distancing and COVID guidelines.

In March 2020, the world of sports went silent. Games were halted, leagues shut down, and the sports networks scrambled to fill airtime. The effects of the COVID-19 pandemic became a grim reality as schools and universities had to cut state and conference championship games short.

Around that time, Northern State University’s men’s basketball team had wrapped up the NSIC Tournament as champions when they defeated Minnesota State on March 3. They were on their way to face Missouri Southern in the NCAA Central Regional tournament, but the game was called off.

Other sports incidentally faced retracted seasons or outright cancellations. NSU’s baseball team had their season stopped after 13 games on March 12. The track team was unable to participate in the NCAA indoor championships, and subsequently, the rest of their season was canceled.

For many seniors, the COVID-19 pandemic brought an end to their collegiate sporting careers. These athletes had trained to compete for most of their young lives, but the health risks dictated that their seasons had ended.

Despite the abrupt end of these seasons, the NCAA extended eligibility for the vast majority of student-athletes. However, some students made commitments that wouldn’t allow them to continue.

Justin Fraase, vice president for enrollment, communications, and marketing, explained how some of these circumstances prevented their eligibility extension. “Some students already had offers for graduate school, and they elected to graduate and move on to their next endeavor,” he said.

Fraase also pointed out that it wasn’t just athletes who were affected. He added, “COVID-19 impacted fine arts, undergraduate research, speech and debate, and many other experiences that Northern prides itself in offering its students. For many, there simply wasn’t a way to make up for the cancelations.” 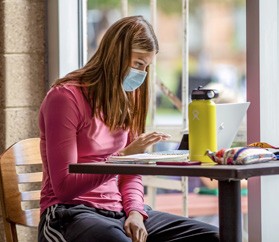 As summer came, and it became clear that the pandemic would not pass anytime soon, NSU’s administrators kept in constant communication with coaches and staff. Terri Holmes, associate director of athletics and compliance, told how the school communicated pandemic procedures and testing with the campus.

Holmes said, “We communicated with the coaches and then had a call with our student-athletes in August. We worked with all of them to keep them safe.” As summer passed and the fall seasons arrived, NSU made the difficult decision to cancel the fall sports seasons. Holmes stated, “The NCAA moved forward with less than 60 percent of participation rates across divisions, and the NSIC was among the conferences that had made the decision to cancel in the fall.”

With fall sports suspended for 2020, Northern focused heavily on its testing and student safety. Along with a COVID-19 informational landing page, Northern also established two task forces, one for academics and another for NSU’s return to campus in fall 2020. Fraase explained that the biggest challenge was facing a return to campus with the faculty and student body.

Despite the unpredictable nature of the pandemic, NSU was prepared and equipped to handle the situation. Fraase went on to say, “Once the semester was off and running, we managed our cases and successfully completed the fall semester on campus.”

However, one of the biggest issues affecting Northern was the availability of supplies for things like hand sanitizer, masks, and other items. Northern continues to work with the South Dakota Department of Health and area health care providers, Avera and Sanford, to provide on-campus testing. Fraase added, “We’ve been able to provide testing for symptomatic students and have offered two on-campus mass testing events thus far.”

With the NSIC opting to start the winter sports season, Northern has stepped up its testing efforts even more. Recently, the state announced an at-home COVID saliva test for asymptomatic individuals, which Northern has promoted to students, faculty, and staff.

Speaking specifically for athletics, the NCAA and NSIC have mandated regular testing of student-athletes in order for competitions to occur. NSU has elected to work with its partners in providing on-campus testing for student-athletes, as well as symptomatic testing for all students.

NSU’s athletic training staff has been an integral part of the on-campus testing for student-athletes. With winter sports resuming, head athletic trainer, Brandon Tetrault, has managed and directed much of the testing effort.

“Early on, it was tough to see if seasons would be cut short or canceled. It’s not something you can tangibly see,” he said. Speaking of when the announcement to cancel and suspend spring and fall sports came through, he added, “It was a shock when we realized things were going to be canceled.”

As the NSIC announced that winter sports would return, NSU took steps to ensure the safety of students, staff, and attendees. Much of NSU’s direction was guided through their partnership with Sanford.

For the university, having detailed information available for students and staff helped them adapt to procedures. Tetrault said, “We communicated directly via email, and we had summer Zoom meetings to let students know what was expected of them.”

Along with a strong public information campaign, which included posters, social media, and discussions, NSU was able to keep students safe in a controlled atmosphere where the university set expectations for social distancing, mask-wearing, and hygiene.

Speaking on how the students have responded to the situation, Tetrault applauded their ability to adapt. He said, “A high percentage of people have been really good in following what we ask of them. We haven’t had a lot of issues with people creating conflicts.” 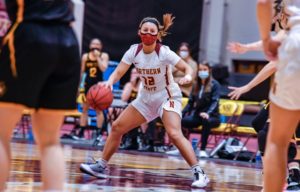 One of the students who has set an example in reckoning with the effects of the pandemic is junior forward for NSU’s women’s basketball team, Lexi Wadsworth. For her, having the opportunity to play again makes her feel grateful. After seniors dealt with last year’s championship tournament cancelations, Wadsworth said everyone was just thankful for the chance to play.

This year, Lexi and her teammates have set the tone for the season. For them, it’s an effort that everyone needs to believe in; for the women’s team, it’s “believe, or leave.” She explained, “Our mantra this season is ‘get to,’ as in we get to wake up every morning; we get to train for the sport we love, and we get to compete again.” That feeling of gratitude helps drive them through the health-related protocols and multiple coronavirus tests they must complete every week.

NSU’s athletic training staff only consists of four staff members, and these trainers must conduct 100 to 300 tests per week. For Wadsworth and her teammates, it’s become a part of everyday life. “We are all accustomed to high-time demand. So, we have been able to schedule around it. Most testing is very quick, and we really appreciate our trainers for all the work they do.”

Northern State is still following masking and social distancing advisories, but a small sense of normality is returning to the campus. In January, a limited number of spectators were allowed to attend home basketball games. Not all universities have permitted spectators to return, and for Lexi Wadsworth and her teammates, the fan presence was something they could appreciate.

It may be some time before we can go back to living as normal, but NSU is prepared for that journey. The university continues to work with its partners and keep students and the public updated on the situation.

If you would like to know more about what Northern is doing to combat the COVID-19 virus and how you can support its students, visit www.northern.edu.