Food & Drink
The Local Pub & Grub
If you’re looking for a great meal, a cold beer, or a fun experience out with family and friends, Pounders is the place to go.
By Josie Clemens | May/June 2021 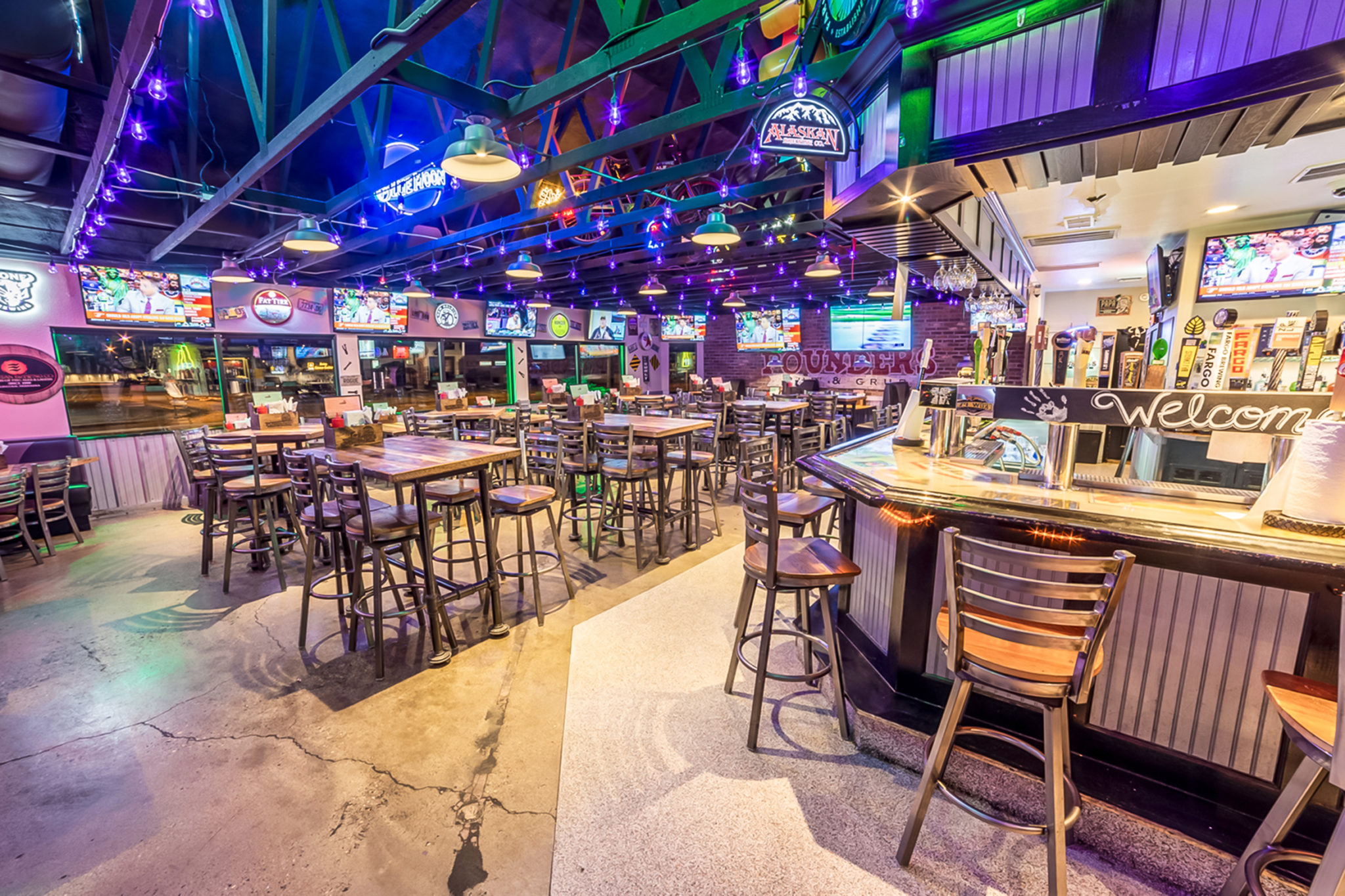 Since opening their doors along Sixth Avenue, Pounders has quickly become a favorite choice when deciding where to go for lunch or dinner in Aberdeen.

Aberdeen is filled with many great restaurants of various cuisines and styles for people to enjoy. One local business has become a popular choice for the community and visitors: Pounders Pub & Grub. Offering 40 beers on tap, a large selection of menu items, and a lively atmosphere, Pounders is a place like no other.

Filling a Need in Aberdeen 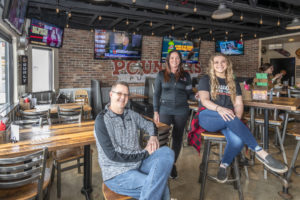 The journey of Pounders began over two decades ago when Kraig Schlaht opened Mavericks. Schlaht, currently the co-owner of three Mavericks locations, noticed something missing in the Aberdeen community — a steakhouse.

Raised in a farming family with no restaurant experience, Schlaht used his ingenuity, determination, and charisma to craft a business unlike any other here. The owner took his time to carefully compile each of his ideas and consider all aspects of starting and managing a local restaurant. Finally satisfied with his preparations, Schlaht opened the doors for business at Mavericks in October 1999.

Over a decade later, in 2010, Mavericks moved to its current building south of the Dakota Event Center, leaving the original location vacant. For almost three years, Schlaht pondered the future of the dormant restaurant on Sixth Avenue, looking for the perfect business that would not only make a profit but, more importantly, bring entertainment and satisfaction to the community of Aberdeen.

Much like the beginning of Mavericks, Schlaht found his inspiration for Pounders by responding to a need within Aberdeen. But the revelation came from a unique adventure. While spending time in Arizona with his son, Schlaht noticed many local businesses that sold an assortment of beers on tap.

“People were really enjoying craft beers and exploring all those options, styles, and flavors from microbreweries and local breweries,” Schlaht said. “It seemed like a good opportunity to give beer lovers a chance to try out beer they couldn’t get anywhere else and offer great food as well.”

Thinking about how he could turn that fascinating niche he found in Arizona into a restaurant in Aberdeen, Schlaht evaluated the business concepts he observed on his trip and considered a variety of ideas suitable for the vacant building. Pounders was the result.

The name for Pounders came from a longstanding relationship with a hunter from Wisconsin. When Mavericks first started business, a couple of hunters came to the restaurant for dinner and drinks, and they quickly built a rapport with Schlaht and the employees that turned into a long-lasting friendship.

One of those hunters was nicknamed “Pounder.” Luckily for Schlaht, the nickname combined with the food and drinks he offers—a pound of beer, a pound of wings, a half-pound burger—created the ideal combination as he chose the name for his restaurant.

Pounders began with a limited menu to accompany the long list of craft beers because what goes better with beer than hamburgers and hot dogs? But Schlaht soon came to realize the true potential for his business.

“What we found over time was that we could offer a lot more variety. And we found that people who didn’t necessarily care about craft beer were coming just for the food and loving it.” Schlaht said.

The menu became a top priority for Pounders. Items such as flatbreads, specialty sandwiches, pretzel bites, chislic, shrimp tacos, salads, and so much more are now offered alongside its main attractions: the 40 beers on tap, the Sunday Bloody Mary Bar, and Build Your Own Burger. Pounders remains trendy and interesting by rotating items on its seasonal menu.

One feature that elevates Pounders in Aberdeen is the outdoor dining experience on its patio. A significant amount of thought and effort went into creating an exceptional summer-time environment for the customers. The outdoor dining area is complete with a beer tap fountain, fire pit, lights, tables, and TVs. Schlaht noted that the patio will open as soon as the weather remains consistently warm, typically around the first part of May.

Once a business built on the idea of being a one-stop-shop for beer-lovers, Pounders is now a widely-known local restaurant that brings a little something to everyone in the community. From families with children to workers on their lunch break to friends enjoying a night out, Pounders has adapted to provide for many groups of people in the area.

Being a popular restaurant entails many highs and lows.

When asked about recent challenges, Schlaht mentioned the obstacles caused by the COVID-19 pandemic not only for Pounders but for all restaurants in town. The owner had to adapt, making choices for the health and safety of the community. But for a business that prides itself on its relationship with the community and the experience it brings to its customers, closing the inside dining area was a difficult decision for Pounders.

A rapid increase in takeout orders to account for a large customer demand called for new training, policies, and procedures. The community’s support was overwhelming, and the phone barely stopped ringing for weeks while the dining services remained closed.

Pounders has currently reopened its indoor dining services to the public and continues to offer takeout. The dining service hours are from 11 AM to 10 PM, seven days a week, and the number to call for takeout is 605-725-BEER.

With the indoor dining experience available again, Pounders is back to doing what it loves: providing excellent customer service.

The owner of Pounders takes pride in his employees and their teamwork, creativity, and dedication. The close-knit staff makes a difference in the success of a small business, and they are all proud of the fun, comfortable atmosphere inside Pounders. Seeing the restaurant filled with families and groups of friends as they eat, drink, and laugh makes up for the trials of running a restaurant during a pandemic.

Pounders also likes to give back to the community of Aberdeen. Every Monday, all year, the business supports members of the military and first responders by providing a half-off discount for their meal. Pounders also participates in food drives and toy donations during the holidays, and the managers compile large prize baskets for charity events. Schlaht and his employees enjoy supporting the community that has graciously helped Pounders become a popular local restaurant in Aberdeen.

All in all, the small city of Aberdeen has been a great place to have a restaurant.

“Aberdeen is big enough to have enough customers to support multiple restaurants and support them well, but small enough that we know our customers personally and we’re connected to the community,” Schlaht said. “Our customers are the best, and we’re grateful for their support.”

Pounders has truly become a local hotspot for great food, a wide selection of beer, and impeccable service in Aberdeen. // –Josie Clemens

Pounders is well-known to those who love sampling different flavors of craft beer. They boast 40 brew selections on tap.

Outdoor dining is a treat, and Pounders has put a lot of detail into making their patio fun and inviting for guests. The space includes a beer tap fountain, fire pit, and TVs.

Pounders started with a limited menu and a long list of craft beers. Over time, they’ve evolved to keep the beer list but added an extensive food menu to compliment it. Photo by Troy McQuillen.